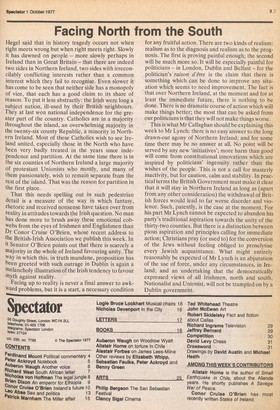 Facing North from the South

Hegel said that in history tragedy occurs not when right meets wrong but when right meets right. Slowly it has dawned on people — more slowly perhaps in Ireland than in Great Britain — that there are indeed two sides in Northern Ireland, two sides with irreconcilably conflicting interests rather than a common interest which they fail to recognise. Even slower it has come to be seen that neither side has a monopoly of vice, that each has a good claim to its share of reason. To put it less abstractly: the Irish were long a subject nation, ill-used by their British neighbours. They at last won national independence for the greater part of the country. Catholics are in a majority throughout the island, an overwhelming majority in the twenty-six county Republic, a minority in Northern Ireland. Most of these Catholics wish to see Ireland united, especially those in the North who have been very badly treated in the years since independence and partition. At the same time there is in the six counties of Northern Ireland a large majority of protestant Unionists who mostly, and many of them passionately, wish to remain separate fram the rest of the island. That was the reason for partition in the first place.

That this needs spelling out in such pedestrian detail is a measure of the way in which fantasy, rhetoric and received nonsense have taken over from reality in attitudes towards the Irish question. No man has done more to brush away these emotional cobwebs from the eyes of Irishmen and Englishmen than Dr Conor Cruise O'Brien, whose recent address to the British-Irish Association we publish this week. In it Senator O'Brien points out that there is scarcely a majority in the whole of Ireland favouring unity. The way in which this, in truth mundane, proposition has been greeted with such outrage in Dublin is again a melancholy illustration of the Irish tendency to favour myth against reality. Facing up to reality is never a final answer to awkward problems, but it is a start, a necessary condition

for any fruitful action. There are two kinds of realism: realism as to the diagnosis and realism as to the prognosis. The first is proving painful enougb ; the second will be much more so. It will be especially painful for politicians — in London, Dublin and Belfast — for the politician's raison d'être is the claim that there is something which can be done to improve any situation which seems to need improvement. The fact is that over Northern Ireland, at the moment and for at least the immediate future, there is nothing to be done. There is no dramatic course of action which will make things better; the most that can be asked from our politicians is that they will not make things worse.

This is what Mr Callaghan should be explaining this week to Mr Lynch: there is no easy answer to the long drawn-out agony of Northern Ireland; and for some time there may be no answer at all. No point will be served by any new 'initiatives'; more harm than good will come from constitutional innovations which are inspired by politicians' ingenuity rather than the wishes of the people. This is not a call for masterly inactivity, but for caution, calm and stability. In practical terms the British Government must make it clear that it will stay in Northern Ireland as long as (apart from any other consideration) the withdrawal of British forces would lead to far worse disorder and violence. Such, patently, is the case at the moment. For his part Mr Lynch cannot be expected to abandon his party's traditional aspiration towards the unity of the thirty-two counties. But there is a distinction between pious aspiration and principles calling for immediate action; Christians pray (or used to) for the conversion of the Jews without feeling obliged to proselytise every Jewish acquaintance. What might entirely reasonably be expected of Mr Lynch is an abjuration of the use of force, under any circumstances, in Ireland; and an undertaking that the democratically expressed views of all Irishmen, north and south, Nationalist and Unionist, will not be trampled on by a Dublin government.