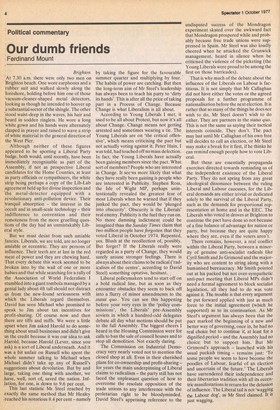 Brighton At 7.30 a.m. there were only two men on Brighton beach. One wore earphones and a rubber suit and walked slowly along the *foreshore, holding before him one of those *vacuum-cleaner-shaped metal detectors, looking as though he intended to hoover up 'a substantial sector of the shingle. The other 'stood waist-deep in the waves, his hair and beard in sodden ringlets. He wore a long 'white gown and his hands were alternately clasped in prayer and raised to wave a strip of white material in the general direction of the West Pier.

Although neither of these figures appeared to be sporting a Liberal Party badge, both would, until recently, have been immediately recognisable as part of the Assembly, if not as prospective Liberal candidates for the Home Counties, at least as party officials or sympathisers, the white strip being perhaps a copy of the Lib-Lab agreement held up for divine inspection and the metal-detector equipped with a revolutionary anti-pollution device. Their tranquil absorption — the interest in the occult and in small-scale technology — their indifference to convention and their remoteness from the more gruelling questions of the day had an unmistakably Liberal style.

But we must desist from such amiable fancies. Liberals, we are told, are no longer amiable or eccentric. They are persons of influence. Their teeth are at last in the red meat of power and they are chewing hard. That every debate this week seemed to be broken into by the wail of one or more babies and that while searching for a rally of the Association of World Federalists I stumbled into a giant tombola managed by a genial lady about 4ft tall should not distract us from the new-found seriousness with which the Liberals regard themselves. David has seen Michael who promised to speak to Jim about tax incentives for profit-sharing. Of course now and then there are tiffs and miffs. We were a little upset when Jim asked Harold to do something about small businesses and didn't give us the credit because it was our idea to ask Harold, because Harold (Lever, since you ask) is a sort of Liberal underneath. And it was a bit unfair on Russell who spent the whole summer talking to Michael when Michael didn't take up any of Russell's suggestions about devolution. But by and large, taking one thing with another, we have, well, sort of, saved the nation. Inflation, for one, is down to 9.6 per cent. This last statistic Mr Steel reached by exactly the same method that Mr Healey .reached his notorious 8.4 per cent — namely by taking the figure for the favourable summer quarter and multiplying by four. The habits of power are catching. But then the long-term aim of Mr Steel's leadership has always been to teach his party to 'dirty its hands'. This is after all the price of taking part in a Process of Change. Because Change is what Liberalism is all about.

According to Young Liberals I met, it used to be all about Protest, but now it's all about Change. Change means not getting arrested and sometimes wearing a tie. The Young Liberals are on 'the critical offensive', which means criticising the pact but not actually voting against it. Peter Hain, I was told, had touched off no mass defection. In fact, the Young Liberals have actually been gaining members since the pact. What sort of members? People who are interested in Change. It seems more likely that what they have really been gaining is people who are interested in Publicity. Stephen Ross, the Isle of Wight MP, perhaps unintentionally revealed the greatest fear of most Liberals when he warned that if they junked the pact, they would be 'plunged into obscurity'. Obscurity is the Liberals' real enemy. Publicity is the fuel they run on. No more damning indictment could be imagined than the Sunday Times claim that two million people have forgotten that they voted Liberal in October 1974. Repented, yes. Blush at the recollection of, possibly. But forget? If the Liberals really were regarded as a party of Change, they would surely arouse stronger feelings. There is always about their claims to be radical ('radicalism of the centre', according to David Steel) something optative, hesitant.

Liberal policymakers tend to start off on a bold radical line, but as soon as they encounter obstacles they seem to back off into a flurry of minor amendments to the status quo. You can see this happening before your very eyes in the 'policy commissions', the Liberals' pre-Assembly soviets in which a hundred-odd delegates debate all day what motions should be put to the full Assembly. The biggest cheers I heard in the Housing Commission were for calls to ban the sale of council houses and to stop all demolition. Not exactly daring.

The Commission on Industrial Democracy very nearly voted not to mention the closed shop at all. Even in their cherished plans for co-ownership and profit-sharing — for years the main underpinning of Liberal claims to radicalism — the party still has not faced the unpleasant question of how to overcome the resolute opposition of the trade unions to any interference with the proletarian right to be bloodyminded. David Steel's appetising reference to the undisputed success of the Mondragon experiment skated over the awkward fact that Mondragon prospered while and prob ably because free trade unions were suppressed in Spain. Mr Steel was also loudly cheered when he attacked the Grunwick management, heard in silence when he criticised the violence of the picketing (the Young Liberals were proud to be among the first on those barricades).

That is why much of the debate about the influence of the Liberals on Labour is factitious. It is not simply that Mr Callaghan did not have either the votes or the agreed proposals for a further programme of nationalisation before the next election. It is rather that so many of the things he does not wish to do, Mr Steel doesn't wish to do either. They are partners in the status quo. This is not the same as saying their tactical interests coincide. They don't. The pact may last until Mr Callaghan of his own free will decides to call an election, or Mr Steel may make a break for it first, if he thinks he can remind enough people how to vote Liberal.

But these are essentially propaganda exercises directed towards reminding us of the independent existence of the Liberal Party. They do not spring from any great ideological dissonance between the ruling Liberal and Labour caucuses, for the Liberal demands are either trivial or dedicated solely to the survival of the Liberal Party, such as the demands for proportional representation at home and in the EEC. The Liberals who voted in droves at Brighton to continue the pact have done so not because of a fine balance of advantage for nation or party, but because they are quite happy where they are, even if the voters aren't.

There remains, however, a real conflict within the Liberal Party, between a minority of genuine anti-socialist radicals like Cyril Smith and Jo Grimond and the majority who are content to string along with a humanised bureaucracy. Mr Smith pointed out at his packed but not over-sympathetic anti-pact meeting that Liberal MPs didn't need a formal agreement to block socialist legislation, all they had to do was vote against it. The trouble is that every argument he put forward applied with just as much force to the initial agreement (which he supported) as to its continuation. As Mr Steel's argument has always been that the pact marked the beginning of a new and better way of governing, once in, he had no real choice but to continue it, at least for a dignified period — and the Assembly had no choice, but to support him. But Mr Grimond's approach — launched with his usual puckish timing — remains just: 'To' some people we seem to have become the poodles of Labour, fearful of an election and uncertain of the future.' The Liberals have surrendered their independence and their libertarian tradition with all its eccentric manifestations in return for the delusion of influence. The Liberal tail is not 'wagging the Labour dog', as Mr Steel claimed. It is just wagging.