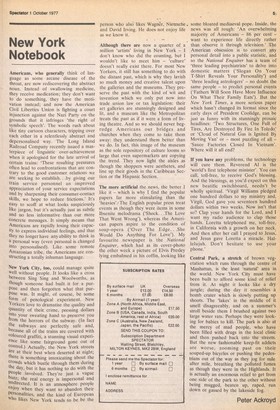 Americans, who generally think of language as some arcane disease of the throat, are now rediscovering the abstract noun. Instead of swallowing medicine, they receive medication; they don't want to do something, they have the motivation instead; and now the American Civil Liberties Union is fighting a court injunction against the Nazi Party on the grounds that it infringes 'the right of symbolic speech'. The words rush about Like tiny cartoon characters, tripping over each other in a relentlessly abstract and depersonalised way. The Long Island Railroad Company recently issued a masterpiece of linguistic over-achievement when it apologised for the late arrival of certain trains: 'These resulting pressures often lead to confrontations that are contrary to the good customer relations we are seeking to establish...by giving our train service personnel an improved appreciation of your service expectations and by sharpening their consumer-contact Skills, we hope to reduce frictions.' It's easy to scoff at what looks suspiciously like jargon, but it's actually just as subtle and no less informative than our more concrete messages. It simply means that Americans are rapidly losing their capacity to express individual feelings, and that they no longer have any ability to think in a personal way (even personal is changed into personalised). Like some remote Amazonian tribe, the Americans are constructing a totally inhuman language.

New York City, too, could manage quite well without people. It looks like a cross between Sing Sing and Woolworths, as though someone had built it for a purpose and then forgotten what that purPose was. It might, of course, be some form of penological experiment. New Yorkers love to dramatise the quality and quantity of their, crime, pressing dollars Into your sweating hand to preserve you from the horrors of the subway. (In fact the subways are perfectly safe and, because all of the trains are covered with coloured graffiti, a stunning visual experience like some fairground gone out of Control) Actually, the New York streets are at their best when deserted at night; there is something intoxicating about the Crowds which bustle through them during the day, but it has nothing to do with the People involved. They're just a vague buzz; the real energy is impersonal and undirected. It is an atmosphere people enjoy when they want to abandon their Personalities, and the kind of European Who likes New York tends to be be the person who alsolikes Wagner, Nietzsche and David Irving. He doesnot enjoy life as we know it.

Although there are now a quarter of a million 'artists' living in New York — I don't know who did the counting, but I wouldn't like to meet him — 'culture' doesn't really exist there. For most New Yorkers, it still has something to do with the distant past, which is why they lavish so much money and creative talent upon the galleries and the museums. They preserve the past with the kind of wit and invention which we only put now into trade union law or tax legislation: their art galleries are stunningly designed and lit, and a museum like the Metropolitan treats the past as if it were a form of living theatre. And so we should never begrudge Americans our bridges and churches when they come to take them away: they understand them better than we do. In fact, this image of the museum as the sole repository of culture looms so large that even supermarkets are copying the trend. They now light the aisles as though the shoppers were aesthetes, and line up their goods in the Caribbean Section or the Hispanic Section.

The more artificial the news, the better I like it — which is why I find the popular papers far more stimulating than the 'heavies'.'The English popular press treat events as though they were items in some Ibsenite melodrama ('Shock...The Love That Went Wrong'), whereas the American papers aspire to the condition of soap-opera ('Over The Edge...She Would Do Anything For Love). My favourite newspaper is the National Enquirer, which had as its cover-photo the other week a picture of Elvis Presley lying embalmed in his coffin, looking like • some bloated mediaeval pope. Inside, the news was all rough: 'An overwhelming majority of Americans — 86 per cent — want to experience life directly rather than observe it through television.' The American obsession is to convert any personal detail into a public statistic, and so the National Enquirer has a team of 'three leading psychiatrists' to delve into domestic matters ('Slogan On Your T-Shirt Reveals Your Personality') and 'three leading astrologers' — no doubt the same people — to predict personal events ('Fathers Will Soon Have More Influence On What Their Family Eats'). But the New York Times, a more serious paper which hasn't changed its format since the early days of President Coolidge, can be just as funny with its stunningly prosaic headlines: 'Two Structures, One Full of Tires, Are Destroyed By Fire In Toledo; or 'Cloud of Natural Gas is Ignited By Moving Van' or — most puzzling of all — 'Sauce Factories Closed In Vietnam'. Where will it all end?

If you have any problems, the technology will cure them. Reverend Al is the 'world's first telephone minister'. You can call, toll-free, to receive God's blessing. And the blessings, as you'd expect on this new beatific switchboard, needn't be wholly spiritual. 'Virgil Williams pledged one hundred dollars to my ministry and, Virgil, God gave you seventeen hundred dollars within two weeks. Now isn't that so? Clap your hands for the Lord, and I want my radio audience to clap those hands. Loretta telephoned me, toll-free, in California with a growth on her neck; And then after her call I prayed to Jesus, and Jesus gave Loretta a miracle. Hallelujah. Don't hesitate to use your phone.'

Central Park, a stretch of brown vegetation which runs through the centre of Manhattan, is the least 'natural' area in the world. New York City must have been built to afford some kind of relief from it. At night it looks like a dry jungle; during the day it resembles a bomb crater which is slowly putting up shoots. The 'lakes' in the middle of it smell disagreeably, and on a summer's stroll beside them I brushed against two large water rats. Perhaps they were looking for babies to kill. The park is also at the mercy of mad people, who have been filled with drugs in the local clinic and then pushed back into the .streets. But the new fashionable keep-fit addicts are worse, zooming past on their souped-up bicycles or pushing the pedestrians out of the way as they jog for mile after mile, breathing the polluted fumes as though they were in the Highlands. It is actually an enormous relief to get from one side of the park to the other without being mugged, beaten up, raped, run down or gassed by the lakeside fog.