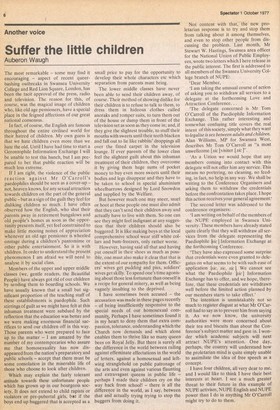 The most remarkable — some may find it encouraging — aspect of recent queerbashing outbreaks in Swansea University College and Red Lion Square, London, has been the tacit approval of the press, radio and television. The reason for this, of course, was the magical image of children who, like old age pensioners, have a special place in the feigned affections of our great national consensus.

In fact, of course, the English are famous throughout the entire civilised world for their hatred of children. My own guess is that we hate children even more than we hate the old. Until I have had time to start a Gerontophile Information Exchange I will be unable to test this hunch, but I am prepared to bet that public reaction will be much less extreme.

If I am right, the violence of the public reaction against Mr O'Carroll's paedophiles should be seen as a cover-up — not, heaven knows, for any sexual attraction towards children on the part of the general public — but as a sign of the guilt they feel for disliking children so much. I have often observed how the English, who shut their parents away in retirement bungalows and old people's homes as soon as the opportunity presents itself, yet feel constrained to make little mooing noises of appreciation whenever an old age pensioner is wheeled onstage during a children's pantomime or other public entertainment. So it is with children. In order to understand the present phenomenon I am afraid we will need to analyse it by social class.

, Members of the upper and upper middle classes (we, gentle readers, the Beautiful People) have always got rid of our children by sending them to boarding schools. We have usually known that a small but significant proportion of the teaching staff of these establishments is paedophile. Such stirrings of guilt as we might have felt at this inhuman treatment were subdued by the reflection that the education was better and we were making enormous financial sacrifices to send our children off in this way.

Those parents who were prepared to face up to the matter — I am amazed by the number of my contemporaries who assure me that homosexuality has now disappeared from the nation's preparatory and public schools — accept that there must be some consolation in the miserable life of those who choose to look after children.

Which may explain the fairly tolerant attitude towards these unfortunate people which has grown up in our bourgeois society. It does not extend to child rapists or violators or pre-pubertal girls, but if the boys end up buggered that is accepted as a small price to pay for the opportunity to develop their whole characters etc which ' separation from parents must bring.

The lower middle classes have never been able to send their children away, of course. Their method of showing dislike for their children is to refuse to talk to them, to dress them in hideous clothes called anoraks and romper suits, to turn them out of the house or dump them in front of the television set as soon as they come in; and, if they give the slightest trouble, to stuff their mouths with sweets until their teeth blacken and fall out to lie like rabbits' droppings all over the fitted carpet in the television lounge. If ever parents of the lower class feel the slightest guilt about this inhuman treatment of their children, they overcome it by giving them huge sums of pocket money to buy even more sweets until their bodies and legs disappear and they have to be taken to school in special aluminium wheelbarrows designed by Lord Snowdon and supplied by the Welfare.

But however much one may sneer, snarl or hoot at these people one must also admit that they can't send their children away and actually have to live with them. So one can see they might feel indignant at any suggestion that their children should also be buggered. It is like making boys at the local comprehensive school wear stiff white collars and bum-freezers, only rather worse.

However, having said all that and having put oneself in their shoes as much as possible, one. must also make it clear that that is the extent of our sympathy for them. Officers' wives get pudding and pies, soldiers' wives get skilly. To spend one's time agonising about those less fortunate than oneself is a recipe for general misery, as well as being vaguely insulting to the deprived.

I have sometimes been accused — the accusation was made in these pages recently — of being insufficiently responsive to the special needs of our homosexual community, Perhaps I have sometimes found it in my heart to deny them that extra compassion, tolerance, understanding which the Church now demands and which alone enables them to thrive like so many queen bees on Royal Jelly. But there is surely all the difference in the world between railing against effeminate affectations in the world of letters, against a homosexual and leftwing stranglehold on public patronage of the arts and even against various flaunting and extravagant queens in public life — perhaps I made their children cry on the way back from school! — there is all the difference in the world, as I say, between that and actually trying trying to stop the buggers from doing it. Not content with that, the new proletarian response is to try and stop them from talking about it among themselves, and even to stop other people from discussing the problem. Last month, Mr Stewart W. Hastings, Swansea area officer for the National Union of Public Employees, wrote two letters which I here release in the public interest. The first is addressed to all members of the Swansea University College branch of NUPE: 'Dear Member, 'I am taking the unusual course of action of asking you to withdraw all services to a delegate at the forthcoming Love and Attraction Conference. . .

'The delegate concerned is Mr Tom O'Carroll of the Paediophile Information Exchange. This rather interesting and somewhat confusing title covers the real intent of this society, simply what they want to legalise is sex between adults and children. Alan Williams, MP for Swansea West, describes Mr Tom O'Carroll as "a most unwellcome [sic]visiter [sic ]" .

'As a Union we would hope that any members coming into contact with this delegate will not offer him any service. This means no portering, no cleaning, no feeding, in fact, no help in any way. We shall be writing to the Conference Organisers and asking them to withdraw the credentials before the confrontation takes place. I hope this action receives your general agreement?

The second letter was addressed to the conference organisers: 'I am writing on behalf of the members of the NUPE employed in Swansea University. These members have already stated quite clearly that they will withdraw all services from the delegate representing the Paediophile [sic] Information Exchange at the forthcoming Conference.

'They have also expressed some surprise that credentials were even granted to delegates on what seems to be with such ease of application [sic, sic, sic]. We cannot see what the Paediophile [sic] Information Exchange has to offer, and we hope, therefore, that these credentials are withdrawn well before the limited action planned by our members starts to take effect.'

The intention is unmistakably not so much to register disgust at what Mr O'Carroll had to say as to prevent him from saying it. As we now know, the university authorities were more concerned about their tea and biscuits than about the Conference's subject matter and gave in. I wonder which academic subjects will next attract NUPE's attention. One day, perhaps, the country will understand how the proletarian mind is quite simply unable to assimilate the idea of free speech as a concept.

I have four children, all very dear to me, and I would like to think I have their best interests at heart. I see a much greater threat to their future in this example of NUPE activism, NUPE English and NUPE power than I do in anything Mr O'Carroll might try to do to them.