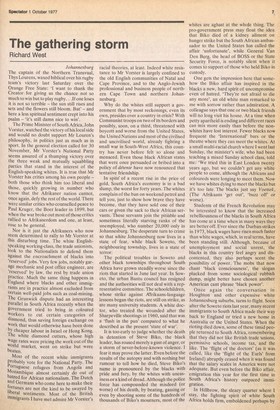 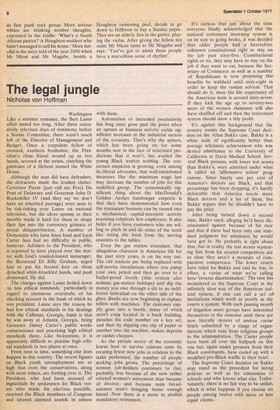 Johannesburg The captain of the Northern Transvaal, Thys Lourens, waxed biblical over his rugby team's victory last Saturday over the Orange Free State: 'I want to thank the Creator for giving us the chance not so much to win but to play rugby. . .If one loses it is not so terrible — the sun still rises and sets and the flowers still bloom. But' — and here a less spiritual sentiment crept into his psalm — 'it's still damn nice to win'.

The Prime Minister of South Africa, John Vorster, watched the victory of his local side and would no doubt support Mr. Lauren's philosophy, in politics just as much as in sport. In the general election called for 30 November, Mr Vorster's National Party seems assured of a thumping victory over the three weak and mutually squabbling parties that stand in the interest of the English-speaking whites. It is true that Mr Vorster has critics among his own people — both those who think him' too liberal and those, quickly growing in number who know that the Afrikaner nation cannot, once again, defy the rest of the world. There were similar critics who counselled peace to Paul Kruger, the Boer leader in 1899, but When the war broke out most of those critics rallied to Afrikanerdom and one, at least, rose to be general.

Nor is it just the Afrikaners who now seem determined to rally to Mr Vorster at this disturbing time. The white Englishspeaking working-class, the trade unionists, look to the Nationalists to defend them against the encroachment of blacks into 'reserved' jobs. Very few jobs, notably garage mechanic and post office engineer, are 'reserved' by law, the rest by trade union Practice. Much the same thing happens in England where blacks and other immigrants are in practice almost excluded from certain well-paid jobs such as coal-mining. The Grunwick dispute had an interesting Parallel in South Africa recently when the government tried to bring in coloured workers to cut certain categories of diamond, thus saving foreign exchange on work that would otherwise have been done by cheaper labour in Israel or Hong Kong. The white diamond cutters, whose high Wage rates were pricing the work out of the world market, went on strike but were beaten.

Most of the recent white immigrants Probably vote for the National Party. The Portuguese refugees from Angola and Mozambique almost certainly do out of hatred for African nationalism. The Dutch and Germans who come here to make their fortunes are not the kind to be swayed by liberal sentiments. Most of the British immigrants I have met admire Mr Vorster's racial theories, at least. Indeed white resistance to Mr Vorster is largely confined to the old English communities of Natal and Cape Province, and to the Anglo-Jewish professional and business people of northern Cape Town and northern Johannesburg.

Why do the whites still support a government that by most reckonings, even its own, presides over a country in crisis? With Communist troops on two of its borders and possibly, soon, on a third, threatened with boycott and worse from the United States, the United Nations and most of the civilised and uncivilised world, already fighting a small war in South-West Africa, this country has never before felt so alone and menaced. Even those black African states that were once persuaded or bribed into a policy of detente have now renounced that tentative friendship.

In spite of a recent rise in the price of gold, South Africa's economy is in a bad slump, the worst for forty years. The whites complain of the ban on weekend petrol and tell you, just to show how brave they have become, that they have sold one of their cars or given the sack to their African servants. These servants join the pitiable and sometimes literally starving ranks of the unemployed, who number 20,000 only in Johannesburg. The desperate turn to crime so that white Johannesburg now lives in a state of fear, while black Soweto, the neighbouring township, lives in a state of terror: The political troubles in Soweto and other black townships throughout South Africa have grown steadily worse since the riots that started in June last year. In Soweto, the urban Bantu council has resigned and the authorities will not deal with a representative committee. The schoolchildren, whose strike against Alrikaans-language lessons began the riots, are still on strike, as are many university students. A white doctor, who treated the wounded after the Sharpeville shootings in 1960, said that was a 'flash in the pan' compared to what he described as the present 'state of war'.

It is too early to judge whether the death in detention of Steve Biko, the black leader, has roused merely a gust of anger, or a storm of never-before-known violence. I fear it may prove the latter. Even before the results of the autopsy and with nothing but rumour to tell how he died, Steve Biko's name is pronounced by the blacks with pride and fury, by the whites with uneas iness or a kind of dread. Although the police force has compounded the misdeed (or worse) of his death, by beating, gassing or even by shooting some of the hundreds of thousands of Biko's mourners, most of the whites are aghast at the whole thing. The pro-government press may float the idea that Biko died of a kidney ailment on hunger strike but the South African ambassador to the United States has called the affair 'unfortunate', while General Van Den Berg, the head of BOSS or the State Security Force, is notably silent when it comes to support of those who held Biko in custody.

One gets the impression here that somehow the Biko affair has inspired in the blacks a new, hard spirit of uncornpromise even of hatred. 'They're not afraid to die any more', an old white man remarked to me with sorrow rather than admiration. A colleague says that one or two black friends will no long visit his house. At a time when petty apartheid is ending and different raceS can mix more easily than before the nonwhites have lost interest. Fewer blacks now frequent the 'International' bars or the theatre where they can meet the whites. At a small multi-racial church where I went last Sunday, the minister's wife, who had been teaching a mixed Sunday school class, told me: 'We tried this in East London twenty years ago, but we couldn't get any white people to come, although the Africans and coloureds were longing to meet them. Now we have whites dying to meet the blacks but it's too late. The blacks just say Voetsek, (The Afrikaans 'get out', 'buzz off' or worse).

Students of the French Revolution may be interested to know that the increased rebelliousness of the blacks in South Africa has come at a time when in many ways they are better off. Ever since the Durban strikes in 1973, black wages have risen much faster than white wages, which, in real terms, have been standing still. Although, because of unemployment and social unrest, the blacks in this country feel angry and discontented, they also perhaps scent the possibility of power. The mobs that now chant 'black consciousness', the slogan plucked from some sociological rubbish dump, might better have chosen another American cant phrase 'black power'.

Once again the conversation in Houghton and other expensive white Johannesburg suburbs, turns to flight. Soon after the Soweto riots last year, many recent immigrants to South Africa made their way back to England or tried a new home in Australia or the United States. When the rioting died down, some of these timid people returned to South Africa, remembering that they did not like British trade 'unions, permissive schools, income tax, and the like. The 'flight of the doctors' (as it was called, like the 'flight of the Earls' from Ireland) abruptly ceased when it was found that the salary scales in America were not adequate. But even before the Biko affair, emigration this year for the first time in South Africa's history outpaced immigration.

In Hillbrow, the sleazy quarter where I stay, the fighting spirit of white South Africa holds firm, emboldened perhaps by its first punk rock group. More serious whites are thinking sombre thoughts, expressed in the riddle: 'What's a South African patriot? A Houghton resident who hasn't managed to sell his house.' More fanciful is the story told of the year 2000 when Mr Nkosi and Mr Mugabe, beside a Houghton swimming pool, decide to go down to Hillbrow to buy a Sunday paper. They see an elderly Jew in the gutter, playing the violin. After giving the fellow ten cents Mr Nkosi turns to Mr Mugabe and says: 'You've got to admit these people have a marvellous sense of rhythm'.