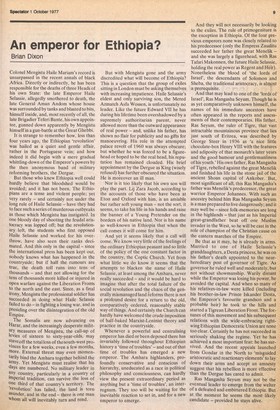 An emperor for Ethiopia?

Colonel Mengistu Haile Mariam's record is unsurpassed in the recent, annals of black Africa. Directly or indirectly, he has been responsible for the deaths of three Heads of his own State: the late Emperor Haile Selassie, allegedly smothered to death, the late General Aman Andom whose house was surrounded by tanks and blasted to bits, himself inside, and, most recently of all, the late Brigadier Teferi Bante, his own appointee, gunned down apparently by Mengistu himself in a gun-battle at the Great Ghebbi.

It is strange to remember how', less than four years ago, the Ethiopian 'revolution' was hailed as a quiet and gentle affair, rather in the Portuguese vein; and how indeed it did begin with a mere gradual whittling-down of the Emperor's powers by the then anonymous band of military reforming brothers, the Dergue.

But those who knew Ethiopia well could hardly believe that bloodshed would be avoided; and it has not been. The Ethiopians are a tense and violent people; yet very rarely — and certainly not under the long rule of Haile Selassie — have they had to face such a series of murderous outbreaks as those which Mengistu has instigated. In one bloody day of shooting the feudal aristocracy was lopped off; but the revolutionary left, the students who first opposed Haile Selassie and worked for his overthrow, have also seen their ranks decimated. And this only in the capital — since the international press has been kept out, nobody knows what has happened in the countryside; but if half the rumours are true, the death toll runs into tens of thousands — and that not allowing for the tens of thousands more killed or injured in open warfare against the Liberation Fronts to the north and the east. Since, as a final Mengistu the professional soldier has succeeded in doing what Haile Selassie failed to do — in fighting a losing war, and in Presiding over the disintegration of the old Empire.

The Somalis are now advancing on Harar, and the increasingly desperate military measures of Mengistu, the call-up of levies of sixteen to sixty-year-olds, may stave off the totalloss of the south-west provinces for a few weeks, even a few months, more. External threat may even momentarily bind the Amhara together behind the army. Yet Mengistu must realise that his days are numbered. No military leader in any country, particularly in a country of imperial tradition, can survive the loss of one third of that country's territory. The revolution' has failed, the land is torn asunder, and in the end — there is one man Whom all will inevitably turn and rend. But with Mengistu gone and the army discredited what will become of Ethiopia? This is a question that the group of exiles sitting in London must be asking themselves with increasing impatience. Haile Selassie's eldest and only surviving son, the Mered Azmatch Asfa Wossen, is unfortunately no leader. Like the future Edward VII he has during his lifetime been overshadowed by a supremely authoritarian parent, never allowed more than the outward appearance of real power — and, unlike his father, has shown no flair for publicity and no gifts for manoeuvring. His role in the attempted palace revolt of 1960 was always obscure; but whether he was forced to be a figurehead or hoped to be the real head, his reputation has remained clouded. His brief appointment by the Dergue as King (wisely refused) has further obscured the situation. He is moreover an ill man.

Nor is it too likely that his own son will play the part. Lij Zara Jacob, according to the accounts of those who have been at Eton and Oxford with him, is an amiable but rather soft young man — not the sort, it seems, to take his life in his hands and raise the banner of a Young Pretender on the borders of his native land. Nor is his name so well-known in Ethiopia that when the call comes it will come for him.

And yet it seems likely that a call will come. We know very little of the feelings of the ordinary Ethiopian peasant and so little of the policy of the one constant factor in the country, the Coptic Church. Yet from what little we do know it seems that the attempts to blacken the name of Haile Selassie, at least among the Amhara, never really succeeded — and it would be hard to imagine that after the total failure of the social revolution and the chaos of the generally mismanaged land reforms there is not a profound desire for a return to the old, comparatively ordered, reasonably stable way of things. And certainly the Church can hardly have welcomed the crude imposition of half-baked Marxist-Leninist theory and practice in the countryside.

Whenever a powerful and centralising emperor has died or been deposed there has invariably followed throughout Ethiopian history a 'time of troubles' — and out of that time of troubles has emerged a new emperor. The Amhara highlanders, profoundly conservative and conscious of hierarchy, uneducated as a race in political philosophy and consciousness, can hardly view the present extraordinary period as anything but a 'time of troubles', an interregnum. They too will be waiting for the inevitable reaction to set in, and for a new emperor to emerge. And they will not necessarily be looking to the exiles. The rule of primogeniture is the exception in Ethiopia. Of the four previous emperors none was closely related to his predecessor (only the Empress Zauditu succeeded her father the great Menelik — and she was largely a figurehead, with Ras Tafari Makonnen, the future Haile Selassie, holding the real power as Regent and Heir). Nonetheless the blood of 'the lords of Israel', the descendants of Solomon and Sheba, the traditional aristocracy, is almost a prerequisite.

And that may lead to one of the 'lords of ' Israel', Ras Mangasha Seyum. Though he is as yet comparatively unknown himself, the names of his immediate ancestors have often appeared in the reports and assessments of their contemporaries. His father, Ras Seyum, the ruler of Tigre, that vast intractable mountainous province that lies just south of Eritrea, was described by George Steer in 1936 as 'a nice little chocolate-box Henry VIII with the features and adiposity of that monarch's later years and the good humour and gentlemanliness of his youth.' His own father, Ras Mangasha of Tigre, rebelled against the great Menelik and finished his life in the stone jail of the ancient Shoan capital of Ankober. But, most significant of all, this Ras Mangasha's father was Menelik's predecessor, the great warrior Emperor Johannes. With such an ancestry behind him Ras Mangasha Seyum is a man prepared to live dangerously; and it may well be — since folk-memories are long in the highlands — that just as his Imperial great-grandfather beat off one Muslim invader in the West, so he will be cast in the role of champion of the Christian cause on the eastern marches of the Empire.

Be that as it may, he is already in arms. Married to one of Haile Selassie's granddaughters, a Desta princess, he was on his father's death appointed to the nearhereditary post of governor of Tigre. As governor he ruled well and moderately, but not without showmanship. Warily distant while the Emperor was losing his power, he avoided the capital. And when so many of his relatives-in-law were killed (including his brother-in-law Prince Iskander Desta, the Emperor's favourite grandson and a probable heir) he took to the hills and started a Tigrean Liberation Front, The fortunes of this movement and his subsequent relations with the wide-embracing rightwing Ethiopian Democratic Union are none too clear. Certainly he has not succeeded in seriously shaking the regime. Yet he has achieved a most important feat: he has survived. And the recent appeals launched from Gondar in the North to 'misguided aristocratic and reactionary elements' to lay down their arms and accept an amnesty suggest that his rebellion is more effective than the Dergue has cared to admit.

Ras Mangasha Seyum may not be the eventual leader to emerge from the welter of a defeated and embittered Ethiopia. But at the moment he seems the most likely candidate — provided he stays alive.