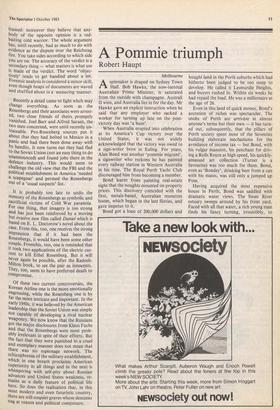 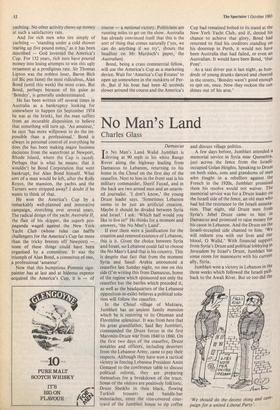 Aspinnaker is draped on Sydney Town Hall. Bob Hawke, the now-teetotal Australian Prime Minister, is saturated from the outside with champagne. Australi II wins, and Australia lies in for the day. Mr Hawke gave an explicit instruction when he said that any employer who sacked a worker for turning up late on the post- victory day was 'a bum'.

When Australia erupted into celebration at its America's Cup victory over the United States, it was not widely acknowledged that the victory was owed to a sign-writer born in Ealing. For years, Alan Bond was another 'pommie migrant', a signwriter who reckons he has painted every railway station in Western Australia in his time. The Royal Perth Yacht Club discouraged him from becoming a member.

Bond learnt from painting real-estate signs that the noughts mounted on property prices. This discovery coincided with the first, metals-based, Australian resources boom, which began in the late Sixties, and gave impetus to it.

Bond got a loan of 200,000 dollars and bought land in the Perth suburbs which had hitherto been judged to be too steep to develop. He called it Lesmurdie Heights, and buyers rushed in. Within six weeks he had repaid the load. He was a millionaire at the age of 26.

Even in this land of quick money, Bond's accretion of riches was spectacular. The snobs of Perth are arriviste in almost anyone's terms but their own — it has turn- ed out, subsequently, that the pillars of Perth society spent most of the Seventies building elaborate mechanisms for the avoidance of income tax — but Bond, with his vulgar mansion, his penchant for driv- ing a Rolls Royce at high speed, his quickly- amassed art collection (Turner is a favourite) was too much for them. Bond, even as 'Bondey', drinking beer from a can with his mates, was still only a jumped up Pom.

Having acquired the most expensive house in Perth, Bond was saddled with dramatic water views. The Swan River estuary sweeps around by his front yard. Faced with all that water, a rich young man finds his fancy turning, irresistibly, to yachting. No other activity chews up money at such a satisfactory rate.

And for rich men who tire simply of yachting — 'standing under a cold shower tearing up five pound notes,' as it has been described — God invented the America's Cup. For 132 years, rich men have poured money into losing attempts to win this ugly ornament at a prodigious rate. Sir Thomas Lipton was the noblest loser, Baron Bich (of Bic pen fame) the most ridiculous, Alan Bond (until this week) the most crass. But Bond, perhaps because of his guise as 'Bondey', is generally underestimated, He has been written off several times in Australia as a bankruptcy looking for somewhere to happen (in September 1974 he was at the brink), but the man suffers from an incurable disposition to believe that something will turn up. 'An amateur,' he says 'has more willpower to do the im- possible than a professional.' Bond is always in personal control of everything he does (he has been making major business decisions from the waterfront at Newport, Rhode Island, where the Cup is raced).

Perhaps that is what he means: that it wouldn't be Bond Corporation that went bankrupt, but Alan Bond himself. What sort of a man would be left, after the Rolls Royce, the mansion, the yachts and the Turners were stripped away? I doubt if he wants to think of that.

He won the America's Cup by a remarkably well-planned and innovative campaign, stretching over several years.

The radical design of the yacht Australia II, the flair of his skipper, the superb pro-

paganda waged against the New York Yacht Club (whose rules can baffle challengers for the America's Cup far more than the tricky breezes off Newport) none of these things could have been organised by a committee. It was the triumph of Alan Bond, a committee of one, a professional 'amateur'.

Now that this bumptious Pommie sign- painter has at last and at hideous expense acquired the America's Cup, it is — of

course — a national victory. Politicians are running miles to get on the show. Australia has already convinced itself that this is the sort of thing that comes naturally (`yes, we can do anything if we try', shouts the headline on Mr Murdoch's paper, the Australian).

As a taxi driver put it last night, as hun- dreds of young drunks danced and cheered in the streets, 'Bondey wasn't good enough to spit on, once. Now they reckon the sun shines out of his arse.'