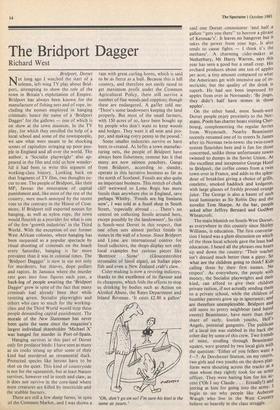 Bridport, Dorset Mot long ago I watched the start of a solemn, left-wing TV play about Brid- port, attempting to show the role of the town in Britain's exploitation of Empire. Bridport has always been known for the manufacture of fishing nets and of rope, in- cluding the nooses employed in hanging criminals: hence the name of a 'Bridport Dagger' for the gallows — one of which is on show at the town museum. In the TV play, for which they enrolled the help of a local school and some of the townspeople, we saw what were meant to be shocking scenes of capitalists stringing up poor peo- ple in England and all over the world. The author, a 'Socialist playwright' also ap- peared in the film and told us how wonder- ful it had been to write this segment of working-class history. Looking back on that fragment of TV film, two thoughts oc- cur to me. The people of Bridport, like their MP, favour the restoration of capital punishment and, like most of the rest of the country, were much annoyed by the recent vote to the contrary in the House of Com- mons. If Bridport still exported nooses for hanging, as well as nylon rope, the town would flourish as a provider for what is one of the few 'growth industries' in the Third World. With the exception of our former West African colonies, where hanging has been surpassed as a popular spectacle by ritual shooting of criminals on the beach every Saturday, hanging is far more prevalent than it was in colonial times. The 'Bridport Daggger' is now in use not only for murderers, but thieves, dope pedlars and rapists. In Jamaica where the murder rate goes into four figures each year, a back-log of people awaiting the 'Bridport Dagger' grew in spite of the fact that many criminals had already been shot while resisting arrest. Socialist playwrights and others who care so much for the working- class and the Third World would stop these people demanding capital punishment. The morale of the New Statesman has never been quite the same since the magazine's largest individual shareholder 'Michael X' was hanged for murder in Port-of-Spain. Hanging survives in this part of Dorset only for predator birds: I have seen as many as six rooks strung up after some of their kind had murdered an ornamental duck. Protected species like herons have to be shot on the quiet. This kind of countryside is not for the squeamish, but at least Nature survives, however red in tooth and claw, as it does not survive in the corn-land where most creatures are killed by insecticide and the stubble burners.

There are still a few sheep farms, in spite of the Common Market, and I was shown a ram with great curling horns, which is said to be as fierce as a bull. Because this is hill country, and therefore not easily rased to get maximum profit under the Common Agricultural Policy, there still survive a number of fine woods and coppices; though these are endangered. A gaffer told me: 'There's some landowners keeping the land properly. But most of the small farmers, with 150 acres of so, have been bought up by people who don't want to keep woods and hedges. They want it all neat and pro- per, and making every penny in the pound.'

Some smaller industries survive or have been re-created. As befits a town manufac- turing nets, the people of Bridport have always been fishermen; rumour has it that many are now salmon poachers. Gangs from Bridport, according to slander, operate in this lucrative business as far as the north of Scotland. Fossils are also quite an important business. This stretch of chalk cliff westward to Lyme Regis has more fossils than anywhere else in England, save perhaps Whitby. 'Fossils are big business now', I was told at a fossil shop in South Street, 'especially abroad . . . There's no control on collecting fossils around here, except possibly by the landowners'. So rich is South-west Dorset in this respect, that one often sees almost perfect fossils in stones in the wall of a house. Since Bridport and Lyme are international centres for fossil collectors, the shops display not only local examples but curious pieces like 'Beetroot Stone' (Gloucestershire stromalite of fossil algae), an Italian pipe- fish and even a New Zealand crab's claw.

Cider-making is now a reviving industry, thanks to the excellence of its flavour and its cheapness, which foils the efforts to stop us drinking by bodies such as Action on Alcohol Abuse, the Rates Department and Inland Revenue. 'It costs £2.80 a gallon' 'Oh, don't go on so! I'm sure his keel is the same as yours.' said one Dorset connoisseur 'and half a gallon "gets you there" to borrow a phrase of Kerouac's'. It leaves no hangover but it takes the power from your legs. It also tends to cause fights — I think it's the methane'. A charming cider-maker at Netherbury, Mr Harry Warren, says this year has seen a good but a small crop. His orchard produces about one ton of apples per acre, a tiny amount compared to what the Americans get with intensive use of in- secticide; but the quality of the drink is superb. He had not been impressed by apples from over in Normandy: 'By jingo, they didn't half have stones in those apples'.

On the other hand, most South-west Dorset people enjoy proximity to the Nor- mans. Poole has charter boats visiting Cher- bourg, complementing the regular ferries from Weymouth. Nearby Beaminster recently renamed one of its streets St James after its Norman twin-town: the twin-town system flourishes here and is fun for those concerned, unlike those unfortunate towns twinned to dumps in the Soviet Union. At the excellent and inexpensive George Hotel in Bridport, the coffee comes from a twin town over in France, and adds to the splen- dour of breakfast giving a choice of grills, omelette, smoked haddock and kedgeree, with large glasses of freshly pressed orange juice. The George is also a haunt of such local luminaries as Sir Robin Day and the novelist Tom Sharpe. At the bar, people asked after Jeffrey Bernard and GocikeY Wheatcroft.

The main blemish on South-West Dorset, as everywhere in this country since Shirley Williams, is education. The first conversa- tion I heard was a glum discussion on which of the three local schools gave the least bad education. I heard all the phrases one hears up and down the country: 'Their teacher isn't dressed much better than a gipsy. So what are the children going to think? Kids calling them by their first names. No respect'. As everywhere, the people with money, the Socialist playwrights and their kind, can afford to give their children private tuition, if not actually sending them to a private school, while the children of humbler parents grow up in ignorance; and are therefore unemployable. Bridport and still more its pretty neighbour (and hated enemy) Beaminster, have more than their share of surly, loutish youths, Hell's Angels, potential gangsters. The publican of a local inn was stabbed in the back the other day by some of this crew. Two friends of mine, strolling through Beaminster square, were greeted by two local girls with the question: 'Either of you fellers want a f---?. At Dorchester Station, on my return, two girls and two youths on the down plat- form were shouting across the tracks at a man whom they rightly took for an armY officer. They were baiting him for his ac- cent (`Oh I say Claude . . . Ectually!) and jeering at him for going into the army. I begin to see why people like Auberon Waugh who live in the West Country believe so heartily in the class struggle.