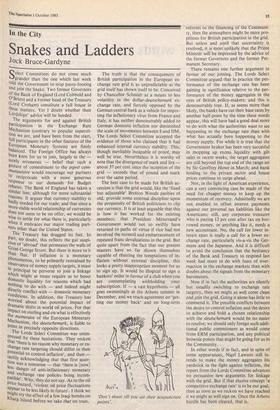 Select Committees do not come much grander than the one which last week told the Government to stop pussy-footing and join the Snake. Two former Governors of the Bank of England (Lord Cobbold and O'Brien) and a former head of the Treasury (Lord Croham) constitute a full house in these matters. Yet I doubt whether their Lordships' advice will be heeded.

The arguments for and against British Participation in the Exchange Rate Mechanism (contrary to popular supersti- tion we are, and have been from the start, full participants in the other features of the European Monetary System) are finely balanced, The Foreign Office has always been keen for us to join, largely in the surely erroneous — belief that such a gesture of commitment to the esprit corn- munautaire would encourage our partners to reciprocate with a more generous response to our demands for Budget rebates. The Bank of England has taken a similar line, although for more substantial reasons. It argues that currency stability is badly needed for our trade; and that since a more stable world relationship of currencies does not seem to be on offer, we would be wise to settle for what there is, particularly When it embraces our major trading part- ners other than the United States.

The Treasury has dragged its feet. In Part, no doubt, this reflects the gut suspi- cion of 'abroad' that permeates the walls of Great George Street. But there is more to it than that. If inflation is a monetary Phenomenon, to be primarily restrained by observance of money supply targets, it must in principal be perverse to join a linkage Which might at times require us to boost domestic liquidity for reasons which had nothing to do with — and indeed might directly conflict with — domestic monetary conditions. In addition, the Treasury has worried about the potential impact of dramatic shifts in world oil prices. For that impact on sterling and on what is effectively the numeraire of the European Monetary Mechanism, the deutschemark, is liable to Point in precisely opposite directions. The Lords Select Committee was unitn- pressed by these hesitations. They reckon that 'there is no reason why monetary or ex- change rate targeting should differ in their potential to control inflation', and then — tacitly acknowledging that that first asser- tion was a nonsense — that 'there is [now] less danger of anti-inflationary monetary and exchange rate policies being incom- patible'. Why, they do not say. As to the oil price hazard, 'violent oil price fluctuations appear to be less likely in future'. 1 think we might try the effect of a few Iraqi bombs on 1

The best case to be made for British ac- cession is that the grid would, like the 'fixed but adjustable' Bretton Woods parities of old, provide some external discipline upon the propensity of British politicians to clip our currency. It is at least arguable that this is how it has worked for the existing members: that President Mitterrand's Government would not so swiftly have returned to paths of virtue if vice had not involved the turmoil and embarrassment of repeated franc devaluations in the grid. But quite apart from the fact that our present masters have so far shown themselves capable of resisting the temptations of in- flation without external discipline, this looks a pretty inappropriate moment for us to sign up. It would be illogical to sign a bankers' order in favour of a club when you are contemplating withholding your subscription. If — a vast hypothosis — all goes swimmingly at the Athens summit in December, and we reach agreement on 'get- ting our money back' and on long-term `Don't shoot till you see their acupuncture points'. reforms to the financing of the Communi- ty, then the atmosphere might be more pro- pitious for British participation in the grid. But unless and until that uncertainty is resolved, it is most unlikely that the Prime Minister will be impressed by the advice of the former Governors and the former Per- manent Secretary.

There remains one further argument in favour of our joining. The Lords Select Committee argued that in practice the per- formance of the exchange rate has been gaining in significance relative to the per- formance of the money aggregates in the eyes of British policy-makers: and this is demonstrably true. If, as seems more than likely, the banks have cut their base rates by another half-point by the time these words appear, this will have had a good deal more to do with what the authorities want to see happening to the exchange rate than with what has actually been happening to the money supply. For while it is true that the Government broker has been very succesful in mopping up excess liquidity with gilt sales in recent weeks, the target aggregates are still beyond the top end of the range set by Sir Geoffrey Howe in March; and bank lending to the private sector and house prices continue to surge ahead.

Nor, in the light of American experience, can a very convincing case be made of the need for cheaper money to keep up the momentum of recovery. Admittedly we are not enabled to offset interest payments against our personal tax liabilities like the Americans; still, any corporate treasurer who is paying 12 per cent after tax on bor- rowed money, or anything like it, needs a new accountant. No, the call for lower in- terest rates is really a call for a lower ex- change rate, particularly vis-a-vis the Ger- mans and the Japanese. And it is difficult to avoid the conclusion that the hesitancy of the Bank and Treasury to respond last week had more to do with fears of over- reaction in the exchange markets than with doubts about the signals from the monetary barometers.

Now if in fact the authorities are silently but steadily switching to exchange rate targetry, then we might as well come clean and join the grid. Going it alone has little to commend it. The possible conflicts between the desire to control inflation and the desire to achieve and hold a chosen relationship with the deutschemark would be no easier to resolve; we should only forego such addi- tional public commitment as would come from ERM participation, and any political brownie points that might be going for us in the Community.

In other words if in fact, and in spite of some appearances, Nigel Lawson still in- tends to make the money aggregates his yardstick in the fight against inflation, the report from the Lords Committee advances no persuasive new arguments for linkage with the grid. But if that elusive concept 'a competitive exchange rate' is to be our goal, then as soon as we reckon we have reached it we might as well sign on. Once the Athens hurdle has been cleared, that is.