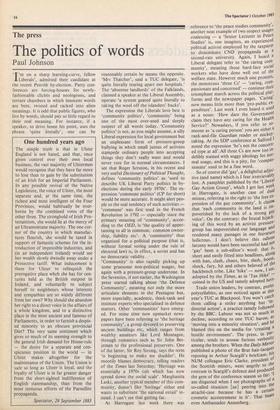 The simple truth is that in Ulster England is not hated, and that, once given control over their own local business, the vast majority of Ulstermen would recognise that they have far more to lose than to gain by the substitution of an Irish for an Imperial Parliament.

In any possible revival of the Native Legislature, the voice of Ulster, the most separate and, at the same time, the richest and most intelligent of the Four

Provinces, would habitually be over- borne by the combined votes of the

other three. The stronghold of Irish Pro- testantism, she would lie at the mercy of an Ultramontane majority. The one cor- ner of the country in which manufac- tures flourish, she would be taxed in support of fantastic schemes for the in- troduction of impossible industries, and (in an independent Ireland) would see her wealth slowly dwindle away under a Protective tariff. What inducement is there for Ulster to relinquish the prerogative place whch she has for cen- turies held as the British outpost in Ireland, and voluntarily to subject herself to neighbours whose interests and sympathies are so widely different from her own? Why should she abandon her right to a direct voice in the affairs of a whole kingdom, and to a distinctive

place in the most ancient and famous of Parliaments, in order to furnish a despis- ed minority to an obscure provincial Diet? The very same sentiment which gives so much of its seeming strength to the general Irish demand for Home-rule — the desire for a separate and con- spicuous position in the world — in Ulster makes altogether for the maintenance of the Union. The Union is safe so long as Ulster is loyal, and the loyalty of Ulster is in far greater danger from the short-sighted indifference of English statemanship, than from the most stenuous efforts of the Parnellite propaganda.