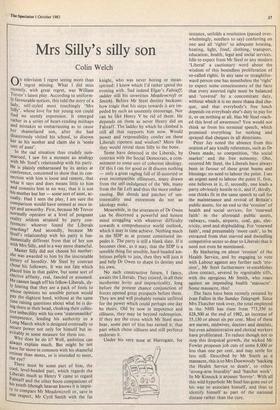 On television I regret seeing more than I regret missing. What I did miss recently, with great regret, was William Trevor's latest play. According to uniform- ly favourable notices, this told the story of a lady, self-styled most touchingly 'Mrs Silly', whose love for her young son could find no seemly expression. It emerged rather in a series of heart-rending mishaps and mistakes so embarrassing as to cause her shamefaced son, after she had disastrously visited his school, to disown her as his mother and claim she is 'some sort of aunt'.

In the sad situation thus crudely sum- marised, I saw for a moment an analogy with Mr Steel's relationship with his party. He is plainly embarrassed by its antics at conference, concerned to show that its con- nection with him is loose and remote, that what it says and does means little to him and commits him in no way, that it is not his mother but her — some sort of aunt, ac- tually. Had I seen the play, I am sure the comparison would have seemed at once in- ept and unworthy. First, because Mr Trevor normally operates at a level of poignant reality seldom attained by party con- ferences: whoever found the Liberals touching? And secondly, because Mr Steel's relationship with his party is fun- damentally different from that of her son with Mrs Silly, and in a way more shameful.

Master Silly did not choose his mother: she was awarded to him by the inscrutable lottery of heredity. Mr Steel by contrast chose his followers. It was not fate which Placed him in that galere, but some sort of elective affinity, real, fancied or assumed. ' He cannot laugh off his fellow-Liberals, sly- ly hinting that they are a pack of fools to whose opinions no sensible person would Pay the slightest heed, without at the same time raising questions about what he is do- ing there at their head, cloaking their collec- tive imbecililty with his own 'statesmanlike' competence, lending his authority to a Long March which is designed eventually to secure power not only for himself but in- evitably in some measure for them too.

Why does he do it? Well, ambition can always explain much. But might he not have far more in common with his shameful retinue than meets, or is intended to meet, the eye?

There must be some part of him, the cool, level-headed part, which regards the Liberals much as Henry V came to regard Falstaff and the other boon companions of his youth (though heavan knows it is impie- ty to compare Mr Meadowcroft or, save in one respect, Mr Cyril Smith with the fat

knight, who was never boring or mean- spirited: I know which I'd rather spend the evening with. Sad indeed Elgar's Falstaff; sadder still his unwritten Meadowcroft or Smith). Before Mr Steel destiny beckons: how tragic that his steps towards it are im- peded by such an unseemly entourage. Nor can he like Henry V be rid of them. He depends on them as never Henry did on Falstaff. The ladder by which he climbed is still all that supports him now. Would power and responsibility confer on these Liberals ripeness and wisdom? More like they would reveal them Silly to the bone.

Some have detected in the Liberals, by contrast with the Social Democrats, a com- mitment to some sort of coherent ideology. Of this I can for good or ill discern nothing — only a great ragbag full of ill-assorted or even incompatible sillinesses, many drawn from the self-indulgence of the '60s, many from the far Left and thus the more embar- rassing. But shreds and patches of sen- timentality and extremism do not an ideology make.

Meanwhile, in the utterances of Dr Owen can be discerned a powerful and honest mind struggling with whatever difficulty towards a comprehensive world outlook, which it may in time achieve. Nothing much in the SDP as at present constituted im- pedes it. The party is still a blank slate. If it becomes clear, as it may, that the SDP is a sensible thing for sensible, hard-headed am- bitious people to join, then they will join it and help Dr Owen to shape its destiny and his own.

No such constructive future, I fancy, awaits the Liberals. They existed, in all their incoherent levity and impracticality, long before the present chance conjunction of forces opened great prospects before them. They are and will probably remain unfitted for the power which could perhaps one day be theirs. Old by now in impotence and silliness, they may be beyond redemption. If they are the cross which Mr Steel must bear, some part of him has earned it; that part which chose silliness and still perforce endorses it.

Under his very nose at Harrogate, for instance, unfolds a resolution (passed over- whelmingly, needless to say) conferring on one and all 'rights' to adequate housing, heating, light, food, clothing, transport, education, health, legal and social services. Idle to expect from Mr Steel or any modern 'Liberal' a cautionary word about the wisdom of this boundless proliferation of so-called rights. In any sane or straightfor- ward person one has nonetheless the 'right' to expect some consciousness of the facts that every asserted right must be balanced and 'covered' by a concomitant duty, without which it is no more thana dud che- que, and that everybody's free lunch depends on everybody else's duty to pay for it, or on nothing at all. Has Mr Steel reach- ed this level of awareness? You would not think so from his terminal speech, which promised everything for nothing and sprayed dud cheques in all directions.

Peter Jay noted the absence from this oration of any kindly references, such as Dr Owen made, to competition, 'the social market' and the free economy. Oho, retorted Mr Steel, the Liberals have always been in favour of these great boons and blessings: no need to labour the point. I see an urgent need to labour the point if, first, one believes in it, if, secondly, one leads a party obviously hostile to it, and if, thirdly, one thinks fit in the same speech to call for the maintenance and revival of Britain's public assets, for an end to the 'erosion' of health and social services, for 'renewed faith' in the aforesaid public assets, railways, roads, airports, coal, gas, elec- tricity, steel and shipbuilding. For 'renewed faith', read presumably 'more cash', to be extracted from that starved and dwindling competitive sector so dear to Liberals that it need not even be mentioned.

By blathering on about 'erosion' of the Health Service, and by engaging to vote with Labour against any further such 'ero- sion', Mr Steel furthermore re-establishes close contact, severed by regrettable tiffs, with the egregious Mr Smith, who roars against an impending health 'massacre'. Some massacre, this!

The facts have been recently restated by Ivan Fallon in the Sunday Telegraph. Since Mrs Thatcher took over, the total employed in the NHS has risen from 773,350 to 828,500 at the end of 1982, an increase of 55,150 or about six per cent. Most of these are nurses, midwives, doctors and dentists, but even administrative and clerical workers have proliferated. To reduce though not to stop this dropsical growth, the wicked Mr Fowler proposes job cuts of some 8,000 or less than one per cent, and may settle for less still. Described by Mr Smith as a massacre, this is to Mrs Dunwoody 'hacking the Health Service to death', to others 'strong-arm brutality' and 'hatchet work'. In Mr Kinnock it arouses 'horror'. With all this wild hyperbole Mr Steel has gone out of his way to associate himself, and thus to identify himself as part of the national disease rather than the cure.