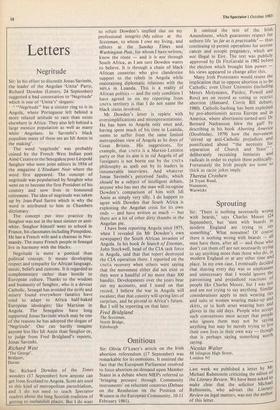 Sir: In his effort to discredit Jonas Savimbi, the leader of the Angolan 'Unita' Party, Richard Dowden (Letters, 24 September) suggested a bad connotation to 'Negritude' which is one of 'Unita's' slogans:

"Negritude" has a sinister ring to it in Angola, where Portuguese left behind a more relaxed attitude to race than exists elsewhere in Africa. They also left behind a large mestico population as well as many white Angolans. In Savimbi's black populism many of these see an Idi Amin in the making'.

The word 'negritude' was probably coined by the French West Indian poet Aime Cesaire or the Senegalese poet Leopold Senghor who were joint editors in.1934 of the magazine L'Etudiant Noir where the word first appeared. The concept of negritude was popularised by Senghor who went on to become the first President of his country and now lives in honoured retirement. The idea of negritude was taken up by Jean-Paul Sartre which is why the word is attributed to him in Chambers dictionary.

The concept put into practice by Senghor was not in the least sinister or anti- white. Senghor himself went to school in France, his classmates including Pompidou. He has a French wife and a chateau in Nor- mandy. The many French people in Senegal live in harmony with the blacks.

Negritude is more a poetical than political concept. It means developing respect and sympathy for African language, music, beliefs and customs. It is regarded as complementary rather than hostile to European culture. Thanks to the wisdom and humanity of Senghor, who is a devout Catholic, Senegal has avoided the strife and misery found everywhere fanatics have tried to adapt to Africa half-baked European ideologies; like Marxism in Angola. The Senegalese have long supported Jonas Savimbi which may be one of the reasons he has adopted the slogan of 'Negritude'. One can hardly imagine anyone less like Idi Amin than Senghor or, to judge from Fred Bridgland's reports, Jonas Savimbi.