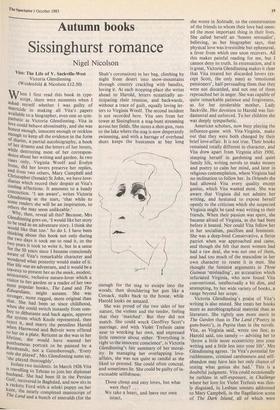 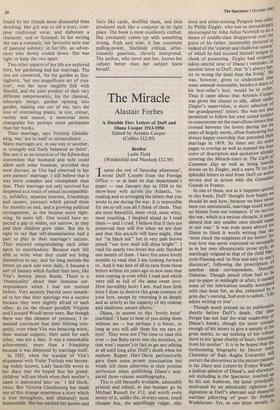 Vita: The Life of V. Sackville-West Victoria Glendinning (Weidenfeld & Nicolson £12.50) When I first read this book in type- script, there were moments when I asked myself whether I was guilty of matricide in making all Vita's papers available to a biographer, even one so sym- pathetic as Victoria Glendinning. Vita in love could behave abominably, and she was honest enough, innocent enough or reckless enough to keep all the evidence in the form of diaries, a partial autobiography, a book of her dreams and the letters of her lovers, while destroying most of her correspon- dence about her writing and garden. In two cases only, Virginia Woolf and Evelyn Irons, did her lovers preserve her replies, and from two others, Mary Campbell and Christopher (female) St John, we have love- diaries which record their despair at Vita's Cooling affections. It amounts to a heady concoction. 'I am aware', writes Victoria Glendinning at the start, 'that while to some readers she will be an inspiration, to others she may seem unlikeable.' Why, then, reveal all this? Because, Mrs Glendinning goes on, 'I would like her story to be read as an adventure story. I think she would like that too.' So do 1. I have been thinking about this book not only during the two days it took me to read it, or the two years it took to write it, but in a sense for the 50 years since I became consciously aware of Vita's remarkable character and wondered what posterity would make of it. Her life was an adventure, and it would be a travesty to present her as the meek, modest, aristocratic, reclusive nature-lover which a visitor to her garden or a reader of her two most popular books, The Land and The Edwardian, might assume. She was stronger, more rugged, more original than that. She had been so since childhood, when she could switch instantly from tom- boy to debutante and back again, approve the system which Knole represented, then reject it, and marry the penniless Harold when Harewood and Belvoir were offered to her on a plate. Reticent as she was in her lifetime, she would have wanted her posthumous portrait to be painted by a Rembrandt, not a Gainsborough. 'Every `role she played', Mrs Glendinning sums up, she played thoroughly'.

Isolate two incidents. In March 1926 Vita is travelling to Tehran to join her diplomat husband. She had been ill in the Persian Gulf, recovered in Baghdad, and now sits in a rackety Ford with a seluki puppy on her knee, the nearly completed manuscript of The Land and a bunch of emeralds (for the Shah's coronation) in her bag, climbing by night from desert into snow-mountains through country crackling With bandits, loving it. At each stopping-place she writes ahead to Harold, letters ecstatically an- ticipating their reunion, and backwards, without a trace of guilt, equally loving let- ters to Virginia Woolf. The second incident is not recorded here. Vita sees from her tower at Sissinghurst a stag-hunt streaming across her fields. She siezes a shot-gun, runs to the lake where the stag is now desperately swimming, and with a barrage of overhead shots keeps the huntsmen at bay long enough for the stag to escape into the woods, then shouldering her gun like a Cossack, stalks back to the house, while Harold looks on amazed.

She was proud of the two sides of her nature, the violent and the tender, feeling that they 'matched'. But they did not match. She could wreck Geoffrey Scott's marriage, and with Violet Trefusis came near to wrecking her own, and expressed little remorse about either. 'Everything is right to the innocent conscience', is Victoria Glendinning's fair summary of her moral- ity. In managing her overlapping love- affairs, she was not quite as candid as she liked to pretend. She could often conceal, and sometimes lie. She could be guilty of in- excusable selfishness: Those cheap and easy loves, but what were they? ...

We take a heart, and leave our own intact, she wrote in Solitude, to the consternation of the friends to whom their love had seem- ed the most important thing in their lives. She called herself an 'honest sensualist', believing, as her biographer says, that physical love was irresistible but ephemeral, a fever from which one soon recovers. All this makes painful reading for me, but I cannot deny its truth. In extenuation, and it is great, Victoria Glendinning makes it clear that Vita treated her discarded lovers (ex- cept Scott, the only man) as 'emotional pensioners', half-persuading them that they were not discarded, and not one of them reproached her in anger. She was capable of quite remarkable patience and forgiveness, as for her intolerable mother, Lady Sackville. Her devotion to Harold was fun- damental and unforced. To her children she was deeply sympathetic.

American scholars, now busy playing the influence-game with Vita-Virginia, make out that they were both changed by their brief love-affair. It is not true. Their books remained totally different in character, and Vita drew apart from Virginia after 1930, steeping herself in gardening and quiet family life, writing novels to make money and poetry to calm her mind, and later in religious contemplation, where Virginia had no inclination to follow her. In Orlando she had allowed Vita every quality except genius, which Vita wanted most. She was aware that Virginia did not admire her writing, and hesitated to expose herself openly to the criticism which she suspected Virginia might be (and was) writing to their friends. When their passion was spent, she became afraid of Virginia, as she had been before it heated. Nor could Vita follow her in her socialism, pacifism and feminism. She was a deep-bred Conservative, a fierce patriot when war approached and came, and though she felt that most women had had a raw deal, she was not one of them, and had too much of the masculine in her own character to resent it in men. She thought the feminist arguments in Three Guineas 'misleading', an accusation which infuriated Virginia, who now found Vita conventional, intellectually a bit dim, and attempting, by her wide variety of books, a range beyond her scope.

Victoria Glendinning's praise of Vita's writing is also muted. She treats her books more as autobiographical material than as literature. She rightly sees more merit in The Garden than in The Land (Poetry in gum-boots'), in Pepita than in the novels. Vita, as Virginia said, wrote too fast; as Harold said, too tamely — advising her to `throw a little more eccentricity into your writing and a little less into your life'. Mrs Glendinning agrees. 'In Vita's potential for ruthlessness, criminal carelessness and self- abandon may have lain her only chance of testing what genius she had.' This is a doubtful judgment. Vita could occasionally be ruthless in self-exposure, in Challenge where her love for Violet Trefusis was thin- ly disguised, in. Lesbian sonnets addressed to Mary Campbell, in the flagellation scene of The Dark Island, all of which were found by her friends more distasteful than shocking. Her gift was to tell a story, com- pose traditional verse, and elaborate a character, real or fictional. In her writing she was a romantic, her favourite note one of pastoral sobriety; in her life, an adven- turer who slowly cooled down. She was right to keep the two apart.

Two other aspects of her life are explored here, her gardening and her marriage. The two are connected, for the garden as Siss- inghurst, 'her one magnificent art of crea- tion', was her most tangible link with Harold, and the joint product of their very different temperaments, his the classical, telescopic design, garden opening into garden, making one out of ten, hers the love of contrasting plants, in size, colour, variety and season, a memorial more changeable but perhaps more permanent than her books.

Their marriage, says Victoria Glendin- ning, was 'not in itself so extraordinary ... Many marriages are, in one way or another, as strangely and finely balanced as theirs'. She sees it as an extension of the Edwardian convention that husband and wife could allow each other freedom, provided they were discreet, as Vita had observed in her own parents' marriage. I still believe that it was more complex and triumphant than that. Their marriage not only survived but deepened as a result of sexual incompatibili- ty, infidelity, separate interests, friendships and careers, journeys which parted them for months on end, and a growing political estrangement, as she became more right- wing, he more left. One would have ex- pected a gap to widen, not narrow, as they and their children grew older. But she is right to say that self-dramatisation had a part to play in their marriage's success. They enjoyed congratulating each other upon its unorthodoxy. Because each felt able to write what they could not bring themselves to say, and for long periods the letters on each side were daily, it became a sort of fantasy which fuelled their love, like Vita's fantasy about Knole. There is a 'theatricality' about their immense cor- respondence which I had not noticed before. Very astutely Harold once remark- ed to her that their marriage was a success because they were slightly afraid of each other, as (in the closest parallel) Virginia and Leonard Woolf never were. But though there was this element of pretence, I re- mained convinced that their lifelong sym- pathy, even when Vita was behaving worst, their mutual support, their need for each other, was not a fake. It was a remarkable achievement, more than a friendship because it was deepened by marriage itself.

In 1921, when the scandal of Vita's elopement with Violet Trefusis was becom- ing widely known, Lady Sackville wrote in her diary that she hoped that her grand- children 'will not blush when their mother's name is mentioned later on.' I did blush, twice. But Victoria Glendinning has made out of this strange experience a story which is true throughout, and ultimately most honourable. She has stacked her quotes and facts like cards, shuffled them, and then produced each like a conjuror in its right place. The book is most excellently crafted. She constantly comes up with something strong, fresh and wise. It has consistent pulling-power, fearlessly critical, affec- tionately generous, cleverly interpreted. The author, who never met her, knows her subject better than her subject knew herself.