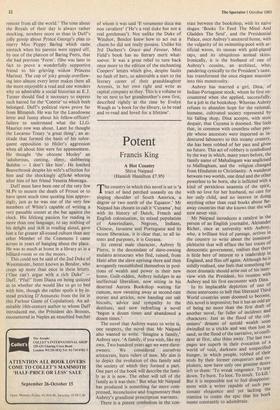 sloping shoulder of South America, a degree or two north of the Equator.' Mr Naipaul has chosen to call it `Cuyama', but with its history of Dutch, French and English colonisation, its mixed population of Amerindians, Negroes, Indians, Chinese, Javanese and Portuguese and its recent liberation, it is clear that, to all in- tents and purposes, it is Guyana.

Its central male character, Aubrey St Pierre, is the descendant of slave-owning mulatto aristocrats who fled, ruined, from Haiti after the slave uprising there and then arrogantly reestablished themselves in posi- tions of wealth and power in their new home. Guilt-ridden, Aubrey indulges in an ineffectual liberalism, now sitting in his deserted Aurora Bookshop waiting for custom, now sweating away at second-rate stories and articles, now handing out salt biscuits, advice and sympathy to the destitute, and now redrafting a novel `begun a dozen times and abandoned a dozen times.'

The novel that Aubrey wants to write is, one suspects, the novel that Mr Naipaul also wanted to write. 'Imagine a family,' Aubrey says. 'A family, if you wish, like my own. Two hundred years ago we were slave- owners. We considered ourselves aristocrats, born rulers of men. My aim is to depict the evolution of this family and the society of which they formed a part. One part of the book will describe the fami- ly as it is now. The other will tell of the family as it was then.' But what Mr Naipaul has produced is something far more com- pressed, inconclusive and fragmentary than Aubrey's grandiose prescription warrants.

There is a potent symbolism in the con- trast between the bookshop, with its naive slogan 'Books To Feed The Mind And Gladden The Soul', and the Presidential Palace, once Aubrey's ancestral home, with the vulgarity of its swimming-pool with ar- tificial waves, its saunas with gold-plated taps, and its ubiquitous animal skins. Ironically, it is the husband of one of Aubrey's cousins, an architect, who, pandering cynically to the President's taste, has transformed the once elegant mansion into this monstrosity.

Aubrey has married a girl, Dina, of Indian-Portuguese stock, whom he first en- countered when she applied, successfully, for a job in the bookshop. Whereas Aubrey refuses to abandon hope for the rational, humane, cultivated society representd by his failing shop, Dina accepts, with stoic despair, that Cuyama is doomed. She feels that, in common with countless other peo- ple whose ancestors were imported as in- dentured labourers to this steamy country, she has been robbed of her past and given no future. This act of robbery is symbolised by the way in which, many years before, the family name of Mahalingam was anglicised to Mallingham, and the religion changed from Hinduism to Christianity. A wanderer between two worlds, one dead and the other powerless to be born, she is inflicted with a kind of pernicious anaemia of the spirit, with no love for her husband, no care for her only child, and no interest in doing anything other than read books about far- away countries that she knows that she will now never visit.

Mr Naipaul introduces a catalyst in the person of an English journalist, Alexander Richer, once at university with Aubrey, who, a brilliant bird of passage, arrives in the country to write about the imminent plebiscite that will efface the last traces of democratic government, realises that there is little here of interest to a readership in England, and flies off again. Although he ts solidly realised, one feels that something far more dramatic should arise out of his inter- view with the President, his reunion with Aubrey and his first encounter with Dina. In its implacable depiction of one of those anterooms to hell that liberated Third World countries seem doomed to become, this novel is impressive; but it has an odd air of being no more than the first draft of another novel, far fuller of incidents and characters. Just as the flood of the col- onisers' dreams of untold wealth soon dwindled to a trickle and was then lost in sand, so the flood of the narrative, so confi- dent at first, also thins away. The last two pages are superb in their evocation of a world of void, darkness and unspecified hunger, in which people, robbed of their souls by their former conquerors and ex- ploiters, now have only one genuine desire left to them: 'To wreak vengeance. To tear down. To burn. To loot. To insult. To kill. But it is impossible not to feel disappoint- ment with a writer capable of such pas- sionate eloquence and yet lacking the stamina to create the epic that his book seems constantly to adumbrate.