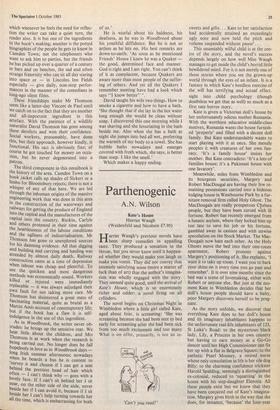 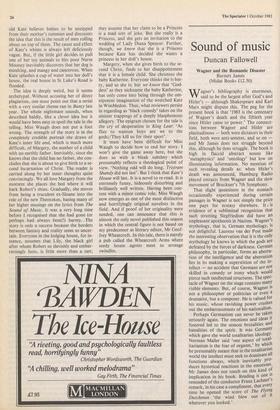 Harriet Waugh's previous novels have .1 I been sharp comedies in appalling taste. They produced a sensation in the throat, but you never knew until it happen- ed whether they would make you laugh or make you vomit. They did not convey that intensely satisfying sense (more a matter of luck than of art) that the author's imagina- tion was wholly engaged with the story. They seemed quite good, until the arrival of Kate's House, which is so enormously richer and odder: a novel firing on all cylinders.

The novel begins on Christmas Night in Wimbledon where a little girl called Kate, aged about four, is screaming: 'She was screaming because she had been sent to bed early for screaming after she had been sick from too much excitement and too many What is on offer, primarily, is not an in- `Can't you read!'

sweets and gifts... Kate to her satisfaction had accidentally attained an exceedingly ugly note and now held the pitch and volume suspended without pause' ...

This unamiably wilful child is at the cen- tre of the story, and the novel's success depends largely on how well Miss Waugh manages to get inside the child's horrid little bewildered mind. For it is not merely one of those stories where you see the grown-up world through the eyes of an infant. It is a fantasy in which Kate's heedless exercise of the will has terrifying and actual effect. sight into child psychology (though doubtless we get that as well) so much as a first rate horror story.

Kate is given a Victorian doll's house by her unfortunately odious mother Rumania. With the worthiest educative middle-class motives, Rumania wants the house furnish- ed 'properly' and filled with a decent doll family. But Kate understandably wants to start playing with it at once. She messily peoples it with creatures of her own fan- tasy. 'It's a family house' insists her mother. But Kate contradicts: 'It's a lots of families house; it's a Pakistani house with one lavatory'.

Meanwhile, miles from Wimbledon and its bourgeois securities, Margery and Robert MacDougal are having their few re- maining possessions carried into a hideous lodging house in West bourne Park by a fur- niture removal firm called Holy Ghost. The MacDougals are really prosperous Chelsea people, but they have been cursed with ill fortune. Robert has recently emerged from a lunatic asylum, where they locked him up too late to save his job or his fortune, gambled away in casinos and with unwise speculation on the Stock Market. The Mac- Dougals now hate each other. As the Holy Ghosts move the bed into their one-room apartment, Robert protests against Margery's positioning of it. She explains, 'I want it to take up room. I want you to bark your shins on it every time you go past and remember'. It is over nine months since the bed was a scene of lovemaking, either with Robert or anyone else. But just at the mo- ment Kate in Wimbledon decides that her doll's house people should have a baby, poor Margery discovers herself to be preg- nant.

As the story unfolds, we discover that everything Kate does to her doll's house and its imaginary inhabitants happens to the unfortunate real-life inhabitants of 123, St Luke's Road: to the mysterious black lady, Lily, a Princess in her own country but having to earn money as a Go-Go dancer until her High Commissioner can fix her up with a flat in Belgrave Square; to the pathetic Pearl Mooney, a retired nurse whose only consolation in life is her vile dog Billy; to the charming confidence trickster Harold Spalding, seemingly a distinguished ex-colonial, reduced to 'squatting' in the house with his step-daughter Elenora. All these people exist but we know that they have been conjured out of Kate's imagina- tion. Margery gives birth in the way that she does, for instance, 'because' the four-year old Kate believes babies to be unzipped from their mother's tummies and discounts the idea that this is the result of men rolling about on top of them. The cause and effect of Kate's whims is always left deliciously vague. But, if the little girl decides to pull one of her toy animals to bits poor Nurse Mooney inevitably discovers that her dog is moulting, and mangy and cancerous. When Kate splashes a cup of water into her doll's house, the real house in St Luke's Road is flooded.

The idea is deeply weird, but it seems archetypal. Without accusing her of direct plagiarism, one must point out that a serial with a very similar theme ran in Bunty last year. The whole nightmare sounds, when described baldly, like a clever idea but it would have been easy to spoil the tale in the telling. Miss Waugh does not put a foot wrong. The strength of the story is in the completely credible portrait she draws of Kate's inner life and, which is much more difficult, of Margery, the mother of a child with no earthly father. Inevitably, since she knows that the child has no father, she con- cludes that she is about to give birth to a se- cond Incarnation of Christ. The reader is carried along by her inner thoughts quite convincingly. We all love Margery from the moment she places the bed where it will bark Robert's shins. Gradually, she moves from being a truculent ex-Sloane into the role of the new Theotokos, basing many of her higher musings on the lyrics from The Sound of Music. It was a very long time before I recognised that she had gone (or perhaps had always been?) barmy. The story is only a success because the borders between fantasy and reality seem so uncer- tain. Everyone in the lodging house, for in- stance, assumes that Lily, the black girl after whom Robert so slavishly and embar- rassingly lusts, is little more than a tart; they assume that her claim to be a Princess is a mad sort of joke. But she really is a Princess, and she gets an invitation to the wedding of Lady Diana Spencer. Further, though, we know that she is a Princess because Kate has decided she wants a princess in her doll's house.

Margery, when she gives birth to the se- cond Christ, finds to her disappointment that it is a female child. She christens the baby Katherine. Everyone thinks she is bat- ty, and so she is; but we know that 'God- dess' as they nickname the baby Katherine, has only come into being through the om- nipotent imagination of the wretched Kate in Wimbledon. Thus, what reviewers persist in regarding as 'black comedy' takes on the sinister trappings of a deeply blasphemous allegory. The epigram chosen for the tale is the cry of desperation in King Lear: 'As flies to wanton boys are we to the gods;/They kill us for their sport'.

It must have been difficult for Miss Waugh to decide how to end her story. I won't give the game away here, but she does so with a bleak subtlety which presumably reflects a theological point of view. 'Nothing odd will do long. Tristram Shandy did not last'. But I think that Kate's House will last. It is a novel to re-read. It is extremely funny, hideously disturbing and brilliantly well written. Having been con- tent with a minor comic role, Miss Waugh now emerges as one of the most distinctive and horrifyingly original novelists in the field. And if proof of her originality were needed, one can announce that this is almost the only novel published this season in which the central figure is not based on my predecessor as literary editor, Mr Geof- frey Wheatcroft. In this tale, there is merely a pub called the Wheatcroft Arms where seedy house agents meet to arrange swindles.