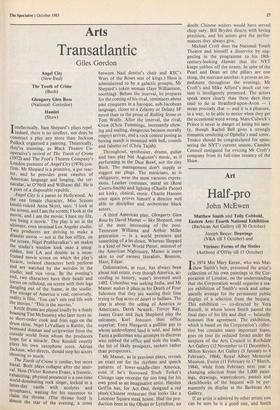 Intellectually, Sam Shepard's plays repel. I Indeed, there is no intellect, nor does he construct a play any more than Jackson , Pollock organised a painting. Theatrically, they're stunning, as Black Theatre Co- operative's revival of The Tooth of Crime (1972) and The Fool's Theatre Company's London premiere of Angel City (1976) con- firm. Mr Shepard is a primitive, a gut reac- tor, and he provides great swashes of American language and longing, the ver- nacular, as O'Neill and Williams did. He is a poet of a disposable republic. Angel City is a paean to Hollywood. As the one female character, Miss Scoons (multi-voiced Anna Skye), says: 'I look at the screen, and I am the screen; I look at the movie, and I am the movie; I hate my life, not being a movie.' The play is set in the ultimate, even terminal Los Angeles studio. Two producers are striving to make a disaster movie — not at the box office, on the screen. Nigel Prabhavalkar's set makes the studio's window look onto a smog- ridden, lost LA and double as a neon- framed movie screen on which the play's bizarre, isolated characters both perform and are watched by the weirdos in the studio; and vice versa. By the evening's end, two characters have their heads and torsos on celluloid, on screen with their legs dangling out of the frame, in the studio. The mirage of America is real; conversely, reality is film. 'You can't mix real life with the movies.' This is the movies.'

Kettle drums are played loudly by a thinly beaming Tim Mclnnerny who later turns in- to short-order cook and fries eggs on the drum skins. Nigel LeVaillant is Rabbit, the bemused shaman and scriptwriter from the outside world from whom the producers hope for a miracle. Don Rendell sweetly plays his own saxophone score. Adrian Jackson, who directs, should stop his actors shouting so much.

The Tooth of Crime is similar, but more banal. Both plays collapse after the inter- val. Hoss (Victor Romero Evans, a frenetic, exhausting, physical presence) is a one-time world-dominating rock singer, locked in a latter-day castle with acolytes and sycophants, waiting for his successor to claim the throne. (The throne itself is almost the star of the evening, a cross between Nazi dentist's chair and RSC's Wars of the Roses seat of kings.) Hoss is administered to by a galactic groupie, Mr Shepard's token woman (Jaye Williamson, soothing). Before the interval, he prepares for the coming of his rival, reminisces about past conquests in a baroque, sub-Jacobean language, closer to a Zelazny or Delany SF novel than to the prose of Rolling Stone or Tom Wolfe. After the interval, the rival, Crow (Chris Tummings, incessantly chew- ing and smiling, dangerous because morally empty) arrives, and a rock contest posing as boxing match is mounted with bell, rounds and falsetto ref (Chris Tajah).

A third American play, Glengarry Glen Ross by David Mamet — like Shepard, one of the most interesting of the post- Tennessee Williams and Arthur Miller generation — is a world premiere and something of a let-down, Whereas Shepard is a kind of New World Pinter, minstrel of the American Nightmare, Mamet is more akin to our earnest literalists, Brenton, Hare, Edgar.

Colonisation, at root, has always been about real estate, even though America, ac- cording to history, wasn't invented until 1492, Columbus was seeking India, and Mr Mamet makes it plain in his Death of Four Salesmen that they are wasting their time trying to flog acres of desert to Indians. The play is about the selling of America to Americans. Derek Newark, Trevor Ray, James Grant and Jack Shepherd play the salesmen; Karl Johnson their office superior; Tony Haygarth a gullible guy to whom undeveloped land is sold, and John Tams a policeman who attempts to discover who robbed the office and stole the leads, the list of likely prospects, suckers rather than prospectors.

Mr Mamet, as in previous plays, reveals an exact ear for the rhythms and speech patterns of lower-middle-class America, even if he's borrowed Studs Terkel's Chicago tape recorder for too long for his own good as an imaginative artist. Hayden Griffin has, for Act One, designed a red plush Chinese restaurant that looks like a Leicester Square steak house. Had the pro- duction been in the Olivier or Lyttelton, no

doubt Chinese waiters would have served chop suey. Bill Bryden directs with loving precision, and his actors give the perfor- mances they always give.

Michael Croft does the National Youth Theatre and himself a disservice by sug- gesting in the programme to his 19th- century-looking Hamlet that the NYT keeps yobbos off the streets. In spite of the Pearl and Dean set (the pillars are one thing, the staircase another: it proves an im- pediment throughout the evening), Mr Croft's and Mike Afford's much cut ver- sion is intelligently presented. The actors speak more clearly than these days they tend to do at Stratford-upon-Avon — I mean precisely that — and it is a pleasure, in a way, to be able to notice when they get the occasional word wrong. Marc Culwick's Prince is never in danger of losing his sani- ty, though Rachel Bell gives a strongly romantic rendering of Ophelia's mad scene. Texaco should be congratulated for spon- soring the NYT's current season, Camden Council castigated for evicting Mr Croft's company from its full-time tenancy of the Shaw.