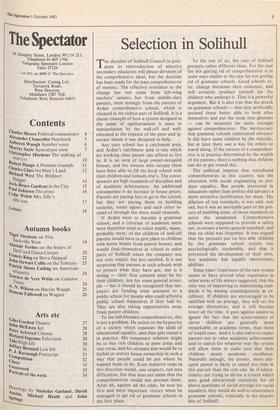 The decision of Solihull Council to post- pone its reintroduction of selective secondary education will please devotees of the comprehensive ideal; but the decision has been made for the least comprehensivist of reasons. The effective resistance to the change has not come from left-wing teachers' unions, but from middle-class parents, most strongly from the parents of Arden comprehensive school, which is situated in the richest part of Solihull. It is a classic example of how a system designed in the name of egalitarianism is open to manipulation by the well-off and well- educated at the expense of the poor and ig- norant whom it was designed to help.

Any state school has a catchment area, and Arden's catchment area is one which no working class parent can afford to live in. It is an area of large owner-occupied houses, and the owners who occupy them have been able to fill the local school with their children and nobody else's. The conse- quences are high standards of discipline and of academic achievement. An additional consequence is an increase in house prices. Parents are paying fees to go to the school, but they are paying them to building societies, estate agents and each other in- stead of through the more usual channels.

If Arden were to become a grammar school, and a criterion of academic merit were therefore used to select pupils, many, probably most, of the children of well-off parents would have to give place to children with better brains from poorer homes, and would find, themselves at school in other parts of Solihull where the company was not only stupid, but less rarefied. It is not surprising that parents at such schools wish to protect what they have got, nor is it wrong — their first concern must be for their children, not for some general princi- ple — but it should be recognised that tax- payers are funding what amounts to a public school for people who could afford a public school themselves if they had to. They are also.. taking opportunities away from poorer children.

To the full-blooded comprehensivist, this is not a problem. He points to the hypocrisy of a society which espouses the ideal of educational equality, and then gets round it in practice. His temporary solution might be to bus rich children to poor areas and vice versa, and his ultimate aim would be to forbid or restrict house ownership in such a way that people could be put where he wanted them to be. Even tentative steps in this direction would, one suspects, run into difficulties, but that does not mean that the comprehensivist would not attempt them, After all, against all the odds, he won his first and most important victory when he managed to get rid of grammar schools in the first place.

To the rest of us, the case of Solihull .prompts rather different ideas. For the case for not getting rid of comprehensives is in some ways similar to the case for not getting rid of grammar schools. Good schools ex- ist: change threatens their existence, and will certainly produce turmoil for the children who undergo it. That is a powerful argument. But it is also true that the attack on grammar schools — that they artificially assisted those better able to look after themselves and put the weak into ghettoes — can be mounted far more strongly against comprehensives. The meritocracy that grammar schools represented obvious- ly did leave some children by the wayside, but at least there was a way for others to travel along. If the success of a comprehen- sive is in practice determined by the wealth of the parents, there is nothing that children can do to get round this.

The political impetus that introduced comprehensives in this country was the obsession with social engineering to pro- duce equality. But people interested in education rather than politics did advance a more attractive justification for them. The dilution of top standards, it was said, was sad, but it was an inevitable part of the pro- cess of enabling some of those standards to assist the untalented. Comprehensive schools were supposed to provide a safety net, to ensure a better general standard, and that no child was forgotten. It was argued that the pressure put on less able children by the grammar school system was psychologically intolerable, and that it prevented the development of their own, less academic but equally meritorious, abilities.

Some years' experience of the new.system seems to have proved what experience in other areas of life always suggested, that the only way of improving or maintaining stan- dards is by aiming unambiguously at ex- cellence, If children are encouraged to be satisfied with an average, they will set the average themselves, and it will become lower all the time. It goes against nature to ignore the fact that the achievements of clever children are generally more remarkable, in academic terms, than those of stupid ones. And it is also naive to expect parents not to value academic achievement and to search for whatever way the system will allow them to make sure that their children attain academic excellence. Naturally enough, the poorer, more put- upon parent is likely to spend less time in this pursuit than the rich one. So if educa- tionists are trying to devise a system which puts good educational standards for all above questions of social prestige (or social equality), they would do well to reintroduce grammar schools, especially in the smarter bits of Solihull.