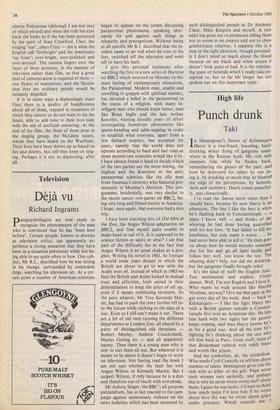 Parapsychologists are now ready to recognise the phenomenon of the man who is convinced that he has 'been here before'. Certain people, known to doctors as television critics, can apparently ex- perience a strong sensation that they have been in a situation previously while not be- ing able to say quite when or how. One sub- ject, Mr R.I., described how he was sitting in his lounge, surrounded by somnolent dogs, watching his television set. At a cer- tain point a number of American scientists

began to appear on the screen discussing paranormal phenomena, speaking alter- nately for and against such things as telepathy and precognition. Without being at all specific Mr R.I. described that the in- cident came to an end when he rose to his feet, switched off the television and went off to have his bath.

I give this personal testimony after watching the first in a new series of Horizon on BBC2 which returned on Monday to this most boring of contemporary obsessions, the Paranormal. Modern man, unable and unwilling to grapple with spiritual matters, has elevated a belief in the paranormal to the status of a religion, with many in- telligent men who should know better, men like Brian Inglis and the late Arthur Koestler, wasting literally years of effort investigating humdrum phenomena like spoon-bending and table-tapping in order to establish what everyone, apart from a few diehard sceptics, has accepted for years, namely that the world does not operate according to hard and fast rules as some second-rate scientists would like it to. I have always found it hard to decide which of the two parties are the more boring, the Inglises and the Koestlers or the anti- paranormal scientists like the silly man from Swansea University who featured pro- minently in Monday's Horizon. This pro- gramme, incidentally, was very similar to the recent cancer two-parter on BBC2, be- ing very long and filmed mostly in America. I hope, once again, that everyone had a nice trip.

I have been watching bits of Old Men at the Zoo, the Angus Wilson adaptation on BBC2, and find myself quite unable to make head or tail of it. Is it supposed to be science fiction or satire or what? I see that part of the difficulty lies in the fact that Angus Wilson is no great shakes as a pro- phet. Writing his novel in 1961, he foresaw a world some years distant in which the British are about to go to war with the Arabs over oil. Instead of which in 1983 we find the British and Arabs locked in mutual trust and affection, both united in their determination to keep the price of oil up, even if it means continuing recession. So the poor adapter, Mr Troy Kennedy Mar- tin, has had to push the story further off in- to the future while sticking to the idea of a war. Even so I still can't make it out. There are a lot of old men running the different departments at London Zoo, all played by a party of distinguished old thespians Robert Morley, Andrew Cruickshank, Marius Goring etc — and all apparently barmy. Then there is a young man who is sent to sort them all out. But whatever it is meant to be about it doesn't begin to work on television. Not having read the book I am not sure whether the fault lies with Angus Wilson or Kennedy Martin. But I suspect Wilson, if only because he is a don and therefore out of touch with everybody.

Mr Aubrey Singer, the BBC's all-purpose panjandrum, has at last reacted to the cam- paign against unnecessary violence on the news bulletins which has been mounted by such distinguished people as Dr Anthony Clare, Miles Kington and myself. A new edict has gone out to producers telling them not to zoom in on corpses and not to show griefstricken relatives. I suppose this is a step in the right direction, though personal- ly I don't mind so much about the blood because on my black and white screen it doesn't look quite so bad. It is the continu- ing spate of funerals which I really take ex- ception to, but so far Mr Singer has not spoken out on this important topic.