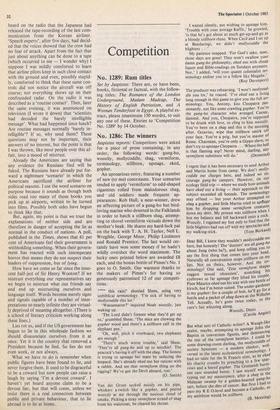 An uproarious entry, featuring a number of new (to me) contestants. Your scenarios tended to apply 'vermiform' to odd-shaped cigarettes rolled from malodorous shag, and old soldiers made frequent ap- pearances. Rob Hull, a near-winner, drew an affecting picture of a gung-ho but bird- loving marine who deserted in the Falklands in order to hatch a stillborn shag, attemp- ting to shovel vermiform victuals down the mother's beak. He shares my hard-luck pat on the back with T. A. H. Taylor, Nell L. Wregible, George Moor, Philip Lissimore and Ronald Prentice. The last would cer- tainly have won some money if he hadn't wildly overshot the word maximum. The lucky ones printed below are awarded £8 each, and the bonus bottle of Pimm's No. I goes to 0. Smith. Our warmest thanks to the makers of Pimm's for having so generously patronised 12 of our competi- tions.

""" this rain!' shouted Shem, using very unbiblical terminology. 'I'm sick of having to mollycoddle this lot.'

The Lord didn't foresee what they'd get up to,' grumbled Shem. 'The mice are chewing the gopher wood and there's a stillborn calf in the elephant pen.'

'There's much worse trouble,' said Shem. `They're all gung-ho and up to mischief. The peacock's having it off with the shag. The lioness is trying to upstage her mate by seducing the leopard. She's already eked out her rations with a rabbit. And see that vermiform thing on the rigging? We've got the Devil aboard, too.'

Van der Groot sucked noisily on his pipe, whiskers a-twitch like a gopher, and peered woozily at me through the noxious cloud of smoke. Picking a stray vermiform strand of shag from his waistcoat, he cleared his throat. I waited silently, not wishing to upstage him. 'Trouble with your average Kaffir,' he growled, 'is that he's got about as much get-up-and-go as a bloody stillborn rhino. When Cecil and 1 set up at Bandaringi, we didn't mollycoddle the blighters ...'

My patience snapped. 'For God's sake, man, those days are gone! They won't swallow your damn gung-ho philosophy, eked out with cheap liquor and Bible-readings on Sundays anymore. Nor,' I added, 'will your quaint colonialist ter- minology endear you to a fellow like Mugabe.' (Roy Davenport) The producer was rehearsing. `I won't mollycod- dle you lot,' he roared. 'I've eked out a living long enough in this game to give you the full ter- minology. You, Antony, kiss Cleopatra pas- sionately, not like some crawling gopher. You're the gung-ho character who avenged Caesar, dammit. And you, Cleopatra, you're supposed to be drunk with love, so cling to him woozily. You've been on a shag and this is the morning after. Octavius, wipe that stillborn smirk off your face. You're a prig, but you're master of Rome. Charmian, you're only a Gippo slave, so don't try to upstage Cleopatra ... Where the hell is that flaming asp? Never mind, darling, any vermiform substitute will do.' I (Desmond) regret that it has been necessary to send Arthur and Martin home from camp. We don't molly- coddle our charges here, and indeed we en- courage gung-ho campers. However, on our ecology field trip — where we study how animals have eked out a living — their approach to the subject exceeded all bounds. The terminology may offend — but your Arthur attempted to shag a gopher, and little Martin tried to upstage him by dropping some vermiform creatures down my shirt. My protest was stillborn when I lost my balance and fell backward onto a rock. Woozily, I regained my feet only to find that the little blighters had run off with my spectacles and my walking-stick. (Tom Burkard) Dear Bill, I knew they wouldn't mollycoddle me here, but honestly! The 'doctors' are all gung-ho about Jung (who he?), and keep telling you to say the first thing that comes into your head. Naturally all conversation stops stillborn on my lips. Not on theirs, however. And the ter- minology! One said, 'Zese vermiform shapes zuggest zexual obzession', stretching his eyebrows so far upstage they lifted his toupee. Poor Maurice eked out his stay with one bottle of kirsch, but I'm better suited. The under-gardener is my gopher: for a couple of bob, he'll go for a bottle and a packet of shag down at the Wilhelm so the Tell. Actually, he's gone twice today,

Woozily, Denis (Carole Angier/ But what sort of Catholic writer? A Waugh-like zealot, maybe, attempting to upstage John the Baptist in conversion figures, and denouncing the rest of the vermiform heretics. I could be some drawing-room darling, the mollycoddle of society hostesses — a modern thinker, well- versed in the latest ecclesiastical terminology. I had no taste for the St Francis stint, as he eked his charity crumbs by preaching to a few spar rows and a bored gopher. The Greeneish burnt- out case sounded better. I saw myself woozily - typing out my masterpiece, after a shag in the Malayan swamp by a golden-hearted gung-ho tart, before she dies of cancer. But first I had to pass my R E 0-level and become a Catholic, or my ambition would be stillborn. (B. Mooring)