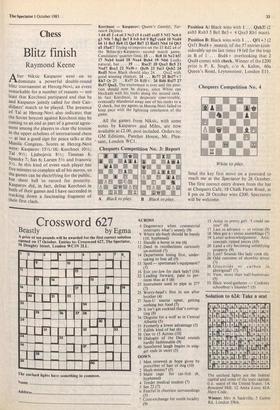 After Niksic Kasparov went on to dominate a powerful double-round blitz tournament at Herceg-Novi, an event remarkable for a number of reasons — not least that Korchnoi partipated and that he and Kasparov jointly called for their Can- didates' match to be played. The presence of Tal at Herceg-Novi also indicates that the Soviet boycott against Korchnoi may be coming to an end as part of a general agree- ment among the players to clear the tension In the upper echelons of international chess — at last a good sign for peace talks at the Manila Congress. Scores at Herceg-Novi were: Kasparov 131/2/16; Korchnoi 101/2; Tal 91/2; Ljubojevic 81/2; Timman 8; Spassky 7; Sax 6; Larsen 51/2 and Ivanovic 31/2. In this kind of event each player has five minutes to complete all of his moves, so the games can be electrifying for the public, but sheer hell to record for posterity. Kasparov did, in fact, defeat Korchnoi in both of their games and I have succeeded in tracking down a fascinating fragment of their first clash.

Kh7 Or 25 Rxf7 26 Rd8 + . 26 Rd6 Rxf7 27 Rxf7 Qxe2. The excitement is over and the posi- tion should now be drawn, since White can blockade with his rooks along the second rank. In fact Korchnoi, in desperate time-trouble, eventually blundered away one of his rooks to a Q check, but my agents in Herceg-Novi failed to keep pace with the lightning conclusion of the game.

All the games from Niksic, with some notes by Kasparov and Miles, are now available at £2.00, post included. Orders to: GM Editions, Panther House, Mt. Plea- sant, London WC1.

Chequers Competition No. 4 While to play.

Send the key first move on a postcard to reach me at the Spectator by 28 October. The first correct entry drawn from the hat at Chequers Caf, 18 Chalk Farm Road, at 8 pm on 28 October wins £200. Spectators will be welcome.