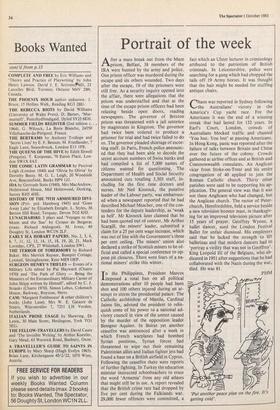 After a mass break out from the Maze prison, Belfast, 38 members of the IRA were hunted by the army and police. One prison officer was murdered during the escape and six others wounded. Two days after the escape, 19 of the prisoners were still free. As a security inquiry opened into the affair, there were allegations that the prison was understaffed and that at the time of the escape prison officers had been relaxing beside open doors, reading newspapers. The governor of Brixton prison was threatened with a jail sentence by magistrates in Kingston. The governor had twice been ordered to produce a prisoner for trial and had twice failed to do so. The governor pleaded shortage of escor- ting staff. In Paris, French police announc- ed that they had been able to decode the secret account numbers of Swiss banks and had compiled a list of 5,000 names of citizens wanted for questioning. The Department of Health and Social Security announced cuts totalling 3,503 staff, in- cluding for the first time doctors and nurses. Mr Neil Kinnock, the putative leader of the Labour party, was embarrass- ed when a newspaper reported that he had described Michael Meacher, one of the con- tenders for the deputy leadership, as 'weak as hell'. Mr Kinnock later claimed that he had been quoted out of context. Mr Arthur Scargill, the miners' leader, submitted a claim for a 25 per cent wage increase, which was out of line with the Government's three per cent ceiling. The miners' union also declared a strike of Scottish miners to be of- ficial and called a special conference to op- pose pit closures. There were fears of a na- tional miners' strike this winter.

Tn the Philippines, President Marcos limposed a total ban on all political demonstrations after 10 people had been shot and 100 others injured during an at- tempt to storm the presidential palace. The Catholic archbishop of Manila, Cardinal Jaime Sin, advised the president to relin- quish some of his power to a national ad- visory council in view of the unrest caused by the murder of the opposition leader Benigno Aquino. In Beirut yet another ceasefire was announced after a week in which French warplanes had bombed Syrian positions, Syrian forces had threatened to wipe out their remaining Palestinian allies and Italian fighter jets had found a base on a British airfield in Cyprus. Following the ceasefire there were reports of further fighting. In Turkey the education minister instructed schoolteachers to erase the word 'Armenia' from any old atlases that might still be in use. A report revealed that the British crime rate had dropped by five per cent during the Falklands war. 29,000 fewer offences were committed, a fact which an Ulster lecturer in criminology attibuted to the patriotism of British criminals. In Leicestershire, police were searching for a gang which had chopped the tails off 19 Army horses. It was thought that the hair might be needed for stuffing antique chairs.

Chaos was reported in Sydney following the Australians' victory in the America's Cup yacht race. For the Americans it was the end of a winning streak that had lasted for 132 years. In Earl's Court, London, crowds of Australians blocked traffic and chanted `You lost. You lost' at passing Americans. In Hong Kong, panic was reported after the failure of talks between Britain and China over the future of the colony. Crowds gathered at airline offices and at British and Commonwealth consulates. An Anglican vicar from Stoke-on-Trent and his entire congregation of 40 applied to join the Roman Catholic church. Thirty other parishes were said to be supporting his ap- plication. The general view was that it was not these Anglicans who had changed, but the Anglican church. The rector of Peter- church, Herefordshire, held a service beside a new television booster mast, in thanksgiv- ing for an improved television picture after 15 years of prayer. Geoffrey Wynne, a ballet dancer, sued the London Festival Ballet for unfair dismissal. His employers said that he lacked the strength to lift ballerinas and that modern dancers had to 'portray a virility that was not in Geoffrey'. King Leopold III of the Belgians, who ab- dicated in 1951 after suggestions that he had collaborated with the Nazis during the war, died. He was 81.

`Put another peace plan on the fire. It's getting cold'.