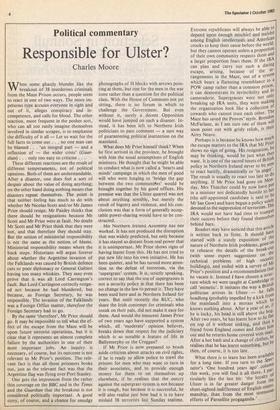 When some ghastly blunder like the breakout of 38 murderous criminals from the Maze Prison occurs, people seem to react in one of two ways. The more im- petuous type accuses everyone in sight and out of it, alleges conspiracy and in- competence, and calls for blood. The other reaction, more frequent in the posher sort, who can all too easily imagine themselves involved in similar scrapes, is to emphasise the difficulty of it all — Let us wait for the full facts to come out . . . no one man can be blamed . . 'an integral part — and a reflection of — the wider crisis' (Guar- dian) . only too easy to criticise .

These different reactions are the result of different temperaments, not of political opinions. Both of them are understandable. After a disaster, one does feel a sort of despair about the value of doing anything; on the other hand doing nothing means that disasters repeat themselves. The point is that neither feeling has much to do with whether Mr Nicolas Scott and/or Mr James Prior should resign. Mr Paisley thinks that there should be resignations because Mr Scott and Mr Prior were at fault. No doubt Mr Scott and Mr Prior think that they were not, and that therefore they should stay. But the notion of ministerial responsibility is not the same as the notion of blame. Ministerial responsibility means where the buck stops. Historians will argue forever about whether the Argentine invasion of the Falklands was caused by British defence cuts or poor diplomacy or General Galtieri having too many whiskies. They may even prove that it was all Lord Carrington's fault. But Lord Carrington correctly resign- ed not because he had blundered, but because, as Foreign Secretary, he was responsible. The invasion of the Falklands was a Foreign Office matter, therefore the Foreign Secretary had to go.

By the same 'therefore', Mr Prior should go. It may be impossible to tell what the ef- fect of the escape from the Maze will be upon future terrorist operations, but it is clear that it represents an almost complete failure by the authorities in one of their most important jobs. An inquiry is necessary, of course, but its outcome is not relevant to Mr Prior's position. The rele- vant fact is that all those prisoners broke out, just as the relevant fact was that the Argentine flag was flying over Port Stanley.

One gets the impression from the rather thin coverage on the BBC and in the Times and the Guardian that the breakout is not considered politically important. A good story, of course, and a chance for smudgy

photographs of H blocks with arrows poin- ting at them, but one for the men in the war zone rather than a question for the political class. With the House of Commons not yet sitting, there is no forum in which to challenge the Government. But even without it, surely a decent Opposition would have jumped on such a disaster. In- stead, it has been left to Northern Irish politicians to pass comment — a sure way of guaranteeing political inattention on the mainland.

What does Mr Prior himself think? When he first arrived in the province, he brought with him the usual assumptions of English ministers. He thought that he might be able to conduct what is now called a 'hearts and minds' campaign in which the men of good will who were longing to 'bridge the gap between the two communities' would be brought together by his good offices. His premise was that the Ulster quarrel was not about anything sensible, but merely the result of bigotry and violence, and his con- clusion was that a form of generally accep- table power-sharing would have to be con- structed.

His Northern Ireland Assembly nas nor worked. It has not produced the disruption that was widely predicted, but only because it has stayed so distant from real power that it is unimportant. Mr Prior shows signs of having learnt from this. He has not tried to put new life into his own initiative. He has been quieter, and he has turned more atten- tion to the defeat of terrorism, via the 'supergrass' system. It is, strictly speaking, correct to say that the use of supergrasses is not a security policy in that there has been no change in the law to permit it. They have been used here and in Northern Ireland for years. But until recently the RUC, who share the Irish contempt for criminals who sneak on their pals, did not make it easy for them. And would the innocent James Prior of two years ago have supported a system which, all 'moderate' opinion believes, breaks down that respect for the judiciary which is so notable a feature of life in Ballymurphy or the Creggan?

If Mr Prior is now prepared to brush aside criticism about attacks on civil rights, if he is ready to allow police to trawl the prisons for men who may want to turn in their associates, and to provide enough money for them to set themselves up elsewhere, if he realises that the outcry against the supergrass system is not because it is rough, but because it is successful, he will also realise just how bad it is to have mislaid 38 terrorists last Sunday teatime. Extreme republicans will always be able to depend upon enough mischief and naivete among English intellectuals and American crooks to keep their cause before the world; but they cannot operate unless a proportion of their own community respects them and a larger proportion fears them. If the 1RA can plan and carry out such a daring escape, arising, because of the ar- rangements in the Maze, out of a system which bears a flattering resemblance to a

POW camp rather than a common prison,

it can demonstrate its invincibility and its cameraderie. Supergrasses were not only breaking up IRA units, they were making the organisation look like a collection of

cowards who cannot trust each other. The Maze has saved the Provos' myth. Brendon McFarlane, as I am sure one of them will soon point out with grisly relish, is their

Perhaps is is because he knows how much the escape matters to the IRA that Mr Prior shows no sign of going. His resignation, he may be thinking, would be just what they want. It is one of the sacred tenets of British policy in Northern Ireland never to be seen to react hastily, dramatically or 'in anger'• The result is usually to react too late to do anything. If Mr Prior had gone on Mon- day, Mrs Thatcher could by now have Put in a minister not dedicatedly hostile to her (the self-appointed candidate is said to be Mr Ian Gow) and have begun a policy solely devoted to the suppression of terrorism. The IRA would not have had time to trumpet their success before they found themselves behind bars. Readers may have noticed that this article is written back to front. It should have started with a stately exposition of the nature of Northern Irish problems, gone on to rehearse the details of the break-out (with some expert suggestions On the technical problems of high security buildings), and ended with a survey of Mr Prior's position and a recommendation that he vacate it. Instead I have chosen a struc- ture which we were taught at Cambridge to call 'mimetic'. It imitates the way a Britt!;/ politician arrives in Ulster — he fat's headlong (probably impelled by a kick from the mainland) into a morass which he knows nothing about. After a year of so, if he is lucky, his head is still above the bag: After two years, he has learnt how to lie flat on top of it without sinking, and then a friend from England comes and fishes him out and he returns home covered with Mad' After a hot bath and a change of clothes, he realises that he has learnt something, but by then, of course, it is too late. What there is to learn has been available for a long time. If you turn to the Spec- tutor's 'One hundred years ago' column this week, you will find it all there. I Par: ticularly like the last bit: 'the loyalty .0" Ulster is in far greater danger from the short-sighted indifference of English states_ maushiP, than from the most strenuous efforts of Parnellite progaganda.'