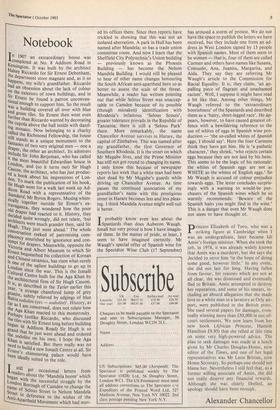 In 1907 an extraordinary house was completed at No. 8 Addison Road in Kensington. It was built by the architect

the department store magnate and, as it so happens, my wife's grandfather. Riccardo had an obsession about the lack of colour 0.n the exteriors of town buildings, and in Sir Ernest he found a patron unconven- tional enough to support him. So the result Was a building covered all over with blue and green tiles. Sir Ernest then went even further than Riccardo wanted by decorating the cupola above the hall inside with dazz1- mg mosaics. Now belonging to a charity called the Richmond Fellowship, the house still stands as a unique monument to the fantasies of two very original men — one a

d. the is e other an architect. Its admirers

include Sir John Betjeman, who has called It the most beautiful Edwardian house in London, and (so it turns out) Sir Hugh Casson, the architect, who has just produc- ed a book about his impressions of Lon- don. To mark the publication of his book, Str unugh went for a walk last week up Ad- dison with a representative of the Standard, Mr Byron Rogers. Musing whim- s,lcallY together outside Sir Ernest's ex- travaganza, they wondered how the poor old draper had reacted to it. History, they decided quite wrongly, did not relate, tut architects were much grander then, said Sir Hugh' They just went ahead.' The whole conversation reeked of patronising corn- Placeney nourished by ignorance and eon- tempt for drapers. Meanwhile, opposite the Victoria and Albert Museum to which Sir Ernest bequeathed his collection of Korean and Chinese ceramics, has risen what surely is one of the ugliest buildings to go up in London since the war. This is the Ismaili Cultural Centre built for the Aga Khan by the architectural firm of Sir Hugh Casson. i It is, as described in the Taller earlier this Year, 'a strange chamfered lump of grey granite, subtly relieved by edgings of blue Bahia sodolite (yes — sodolite)' . History, as the as I am concerned, does not relate how „Ile Aga Khan reacted to this monstrosity. Perhaps (unlike Riccardo, who discussed the tiles with Sir Ernest long before building Bandin Addison Road) Sir Hugh is so that he just went ahead and ordered the socialite on his own. I hope the Aga Khan is satisfied. But there really was no need to build a new Ismaili Centre at all. Sir Ernest's shimmering palace would have been ideally suited to the role.

ed its offices there, Since then reports have trickled in showing that this was not an isolated aberration. A park in Hull has been named after Mandela; so has a trade union committee room. And now I learn that the Sheffield City Polytechnic's Union building — previously known as the Phoenix Building — has become the Nelson Mandela Building. I would still be pleased to hear of other name changes honouring the South African anti-apartheid hero so as better to assess the scale of the threat. Meanwhile, a reader has written pointing out that while Selous Street was unaccep- table to Camden because of its possible (though mistaken) identification with Rhodesia's infamous `Selous Scouts', greater tolerance prevails in the Republic of Tanzania; there is still a `Selous Park' there. More remarkably, the name Chancellor Avenue survives in Harare, the capital of Zimbabwe. This was named after my grandfather, the first Governor of Southern Rhodesia. It is the street on which Mr Mugabe lives, and the Prime MiniSter has still not got round to changing its name. I only know this because of newspaper reports last week that a white man had been shot dead by Mr Mugabe's guards while driving up Chancellor Avenue. As time passes the continued association of my grandfather's name with this prestigious street in Harare becomes less and less pleas- ing. I think Mandela Avenue might well suit it better.

Iprobably know even less about the Spaniards than does Auberon Waugh. Small but very proud is how I have imagin- ed them. In the matter of pride, at least, I seem to have imagined correctly. Mr Waugh's special offer of Spanish wine for the Spectator Wine Club (17 September) has aroused a storm of protest. We do not have the space to publish the letters we have received, but they include one from an ad- dress in West London signed by 13 people with Spanish names. Most of them seem to be women — that is, four of them are called Carmen and others have names like Susana, Consuelo, Ana, Juanita, Margarita, and Aida. They say they are referring Mr Waugh's article to the Commission for Racial Equality. It is, they claim, 'an ap- palling piece of flagrant and unashamed racism'. Well, I suppose it might have read a bit like that. Among other things, Mr Waugh referred to the 'extraordinary boorishness' of the Spaniards and described them as a 'hairy, short-legged race'. He ap- pears, however, to have caused greatest of- fence with a bewildering reference to the use of whites of eggs in Spanish wine pro- duction — 'the so-called whites of Spanish eggs, I should say'. Here the four Carmens think they have got him. He is 'a pathetic character,' they shriek, 'who rejects certain eggs because they are not laid by his hens. This seems to be the logic of his rationale: the whites of Spanish eggs are not as WHITE as the whites of English eggs.' So Mr Waugh is accused of colour prejudice towards eggs. The letter concludes surpris- ingly with a warning to would-be pur- chasers of the Spanish wines which he so warmly recommends: 'Beware of the Spanish hairs you might find in the wine.' This is a danger that even Mr Waugh does not seem to have thought of.

rincess Elizabeth of Toro, who was a 1. striking figure at Cambridge when I was an undergraduate, later became Idi Amin's foreign minister. When she took the job, in 1974, it was already widely known that Amin was a murderer, but she says she Jecided to serve him 'in the hope of doing some good, however little.' In any event, she did not last for long. Having fallen from favour, for reasons which are not at all clear, she was dismissed and eventually fled to Britain. Amin attempted to destroy her reputation, and some of his smears, in- cluding an absurd allegation that she made love to a white man in a lavatory at Orly air- port, were published in the British press. She sued several papers for damages, even- tually winning more than £50,000 in out-of- court settlements. We now learn from her new book (African Princess, Hamish Hamilton £9.95) that she relied at this time on some very high-powered advice. The plan to seek damages was made at a lunch given by Mr Charles Douglas-Home, now editor of the Times, and one of her legal representatives was Mr Leon Brittan, now Home Secretary. So perhaps one should not blame her. Nevertheless 1 still feel that, as a former willing associate of Amin, she did not really deserve any financial rewards. Although she was clearly libelled, an apology should have been enough.