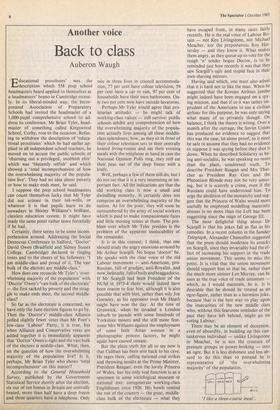 prostitutes' was the description which 558 prep school headmasters heard applied to themselves at a headmasters' beano in Cambridge recent- ly. In its liberal-minded way, the Incor- porated Association of Preparatory Schools had invited the headmaster of a 1,000-pupil comprehensive school to ad- dress its conference. Mr Brian Tyler, head- master of something called Kingswood School, Corby, rose to the occasion. Refus- ing to withdraw the description of 'educa- tional prostitutes' which he had earlier ap- plied to all independent school teachers, he moved on to accuse the public schools of `churning out a privileged, snobbish elite' which was 'blatantly selfish' and which showed a 'total incomprehension of how the overwhelming majority of the popula- tion live'. They had no idea about poverty or how to make ends meet, he said.

I suppose the prep school headmasters can count themselves lucky that Mr Tyler did not urinate in their ink-wells, or whatever it is that pupils learn to do nowadays in Shirley Williams's brilliant, classless education system. It might have made the same point rather more forcefully if he had.

Certainly, there seems to be some incom- prehension around. Addressing the Social Democrat Conference in Salford, 'Doctor' David Owen (Bradfield and Sidney Sussex College, Cambridge) declared in ringing tones and to the cheers of his followers: 'I am middle-class and proud of it. The vast bulk of the electors are middle-class.'

How does one reconcile Mr Tyler's 'over- whelming majority of the population' with 'Doctor' Owen's 'vast bulk of the electorate' — the first racked by poverty and the strug- gle to make ends meet, the second middle- class?

So far as the electorate is concerned, we have only the June election figures to go by. Then the 'Doctor's' middle-class Alliance polled slightly fewer votes than Mr Foot's low-class 'Labour' Party, it is true, but when Alliance and Conservative votes are added together it is immediately apparent that 'Doctor' Owen is right and the vast bulk of the electors is middle-class. What, then, on the question of how the overwhelming majority of the population live? Is it, perhaps, Mr Brian Tyler who shows 'total incomprehension' on this matter?

According to the General Household Survey, published by the Government Statistical Service shortly after the election, six out of ten homes in Britain are centrally heated, more than half have a deep freeze and three quarters have a telephone. Only one in three lives in council accommoda- tion, 77 per cent have colour television, 59 per cent have a car or van, 97 per cent of households have their own bathrooms. On- ly two per cent now have outside lavatories.

Perhaps Mr Tyler would agree that pro- letarian attitudes — he might talk of working-class values — still survive: public schools inhibit any comprehension of how the overwhelming majority of the popula- tion actually lives among all these middle- class splendours; how, as they sit in front of their colour television sets in their centrally heated living-rooms and eat their evening meals with the telephone at hand in case the National Opinion Polls ring, they sill/ eat their peas out of the deep freeze with a knife.

Well, perhaps a few of them still do, but do not see that it is a very interesting or im- portant fact. All the indications are that the old working class is now a small and dwindling minority. It certainty does not comprise an overwhelming majority of the nation. As for the poor, they will soon be outnumbered by the army of social workers which is paid to make compassionate faces and little mooing noises at them. The pro- blem over which Mr Tyler presides is the problem of the apparent ineducability of the remainder.

It is in this context, I think, that one should study the angry emotions aroused by Mr Arthur Scargill. No bogus 'doctor' he. He speaks with the clear voice of the old Labour movement — anti-American, pro- Russian, full of grudges, anti-Royalist, and now, belatedly, full of bully and braggadocio. If Mr Scargill had been President of the NUM in 1973-4 there would indeed have been reason to fear him, although it is also possible that with him, rather than wily Joe Gormley, as his opponent even Mr Heath might have won the day. At the time of Grunwick, when he invaded a London suburb to parade with some hundreds of Yorkshire miners and the still more fear- some Mrs Williams against the employment of some little Asian women in a photographic process factory, he might again have caused unease.

But the plain truth for all to see now is that Caliban has been sent back to his cave. He rages there, calling national coal strikes and throwing insults at the Prime Minister, President Reagan, even the lovely Princess of Wales, but his only real function is as a specimen in some sociological museum or national zoo: unregenerate working-class Englishman circa 1920. His howls remind the rest of the country — the great, middle- class bulk of the electorate — what they

have escaped from, in many cases fairly recently. He is the real voice of Labour Bri- tain — not Ken Livingstone, nor Michael Meacher, nor the preposterous Roy Hat- tersley — and they know it. What makes them angry, as they queue up to vote for the tough 'n' tender bogus Doctor, is to be reminded just how recently it was that they saw Scargill's ugly and stupid face in their own shaving mirrors.

Having said which, one must also admit that it is hard not to like the man. When he suggested that the Korean Airlines jumbo might indeed have been engaged on a spy- ing mission, and that if so it was rather im- prudent of the Americans to use a civilian airliner for this purpose, he was only saying what many of us privately though. On balance, I think the theory is wrong. Over a month after the outrage, the Soviet Union has produced no evidence to suggest that this was the case, let alone proof, so it must be safe to assume that they had no evidence to suppose it was spying before they shot it down. When he described Solidarity as be- ing anti-socialist, he was speaking no more than the plain, unadorned truth. To describe President Reagan and Mrs That- cher as President Ray Gun and the Plutonium Blonde may not be very amus- ing, but it is scarcely a crime, even if the Russians could have understood him. To urge the abolition of the monarchy and sug- gest that the Princess of Wales would more usefully be employed modelling maternity dresses is no more than the Left has been suggesting since the reign of George III.

The most delightful thing about Dr Scargill is that his jokes fall as flat as his remedies. In a recent column in the Sunday Telegraph, Alexander Chancellor suggested that the press should moderate its attacks on Scargill, since they invariably had the ef- fect of increasing his support in the trade union movement. This seems to miss the point. It is vital that the union movement should support him so that he, rather than the much more sinister Len Murray, can be seen as the true voice of trade unionism which, as I would maintain, he is. It is desirable that he should be treated as an ogre-figure, rather than as a harmless joke, because that is the best way to play upon the insecurities of the new middle class who, without this fearsome reminder of the past they have left behind, might go on voting Labour.

There may be an element of deception, even of absurdity, in building up this can- tankerous individual — unlike Livingstone or Meacher, he is not the creature of pressure groups or power-broking — into an ogre. But it is less dishonest and less ab- surd to do this than to pretend he is representative of 'the overwhelming majority' of the population.