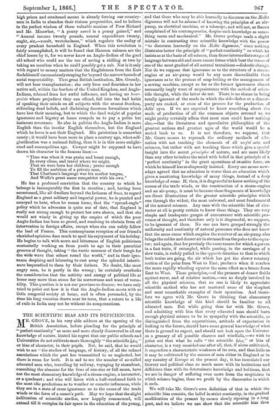 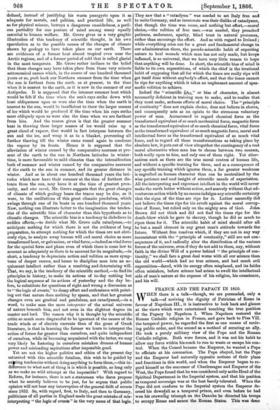 THE SCIENTIFIC BIAS AND ITS DEFICIENCIES. R. GRO VE, in

We will:take Mr. Grove's own definition of that in which the scientific bias consists, the belief in strict continuity, in the gradual modification of the present by causes slowly ripening in a long past, and we believe we can show that the scientific bias thus defined, instead of justifying his warm panegyric upon it as adequate for morals, and politics, and practical life, as well as for physical science, betrays a dangerous onesidedness, a peril- ous partiality for one posture of mind among many equally essential to human welfare. Mr. Grove gives us a very graphic illustration of this tendency of scientific thought, in his own speculation as to the possible causes of the changes of climate shown by geology to have taken place on our earth. There are evidences of a former heat almost tropical even near the Arctic regions, and of a former period of cold that is called glacial in the most temperate. Mr. Grove rather inclines to the belief that theae changes may have taken place from those very minute astronomical causes which, in the course of one hundred thousand years or so, push back our Northern summer from the time when the sun is farthest from the earth, as at present, to the time when it is nearest to the earth, as it is now in the summer of our Antipodes. It is supposed that the intenser summer heat which would be felt if the time when the sun's rays strike down with least obliqueness upon us were also the time when the earth is nearest to the sun, would be insufficient to thaw the larger masses of ice which would be produced if the time when his rays strike most obliquely upon us were also the time when we are farthest from him. And the reason given is that the greater summer heat in thawing these larger masses of ice would raise up a great cloud of vapour, that would in fact interpose between the sun and the ice, and wrap it as in a blanket, preventing all further thawing till the winter came round again to condense the vapour by its frosts. Hence it is supposed that the alleviation of winter caused by the comparative nearness at pre- sent of the earth to the sun in Northern latitudes in winter- time, is more favourable to mild climates than the intensification both of summer and winter caused by the comparative nearness Df the earth to the sun in summer, and its greater distance in winter. And as in about one hundred thousand years the lati- tudes which now have their summer at the time of farthest dis- tance from the sun, may have it at the time of greatest prox- imity, and vice versa, Mr. Grove suggests that the great changes of climate of which geology bears the traces may be due, as it were, to the oscillations of this great climatic pendulum, which swings through one of its beats in one hundred thousand years. Now, nothing can illustrate better to the imagination the tenden- cies of the scientific bias of character than this hypothesis as to climatic changes. The scientific bias is a tendency to disbelieve in sudden effects,—to deride what Mr. Grove calls cataclysms,—to anticipate nothing for which there is not the evidence of long preparation, to attempt nothing for which the times are not obvi- ously ripe, to analyze away human will and moral choice as mere transformed heat, or galvanism, or vital force,—indeed as vital force for the special form and phase even of which there is some law to account as adequately as there is to account for its magnitude,—in short, a tendency to depreciate action and volition as mere symp- toms of deeper causes, and hence to discipline man into an ac- quiescent intellect rather than a resolving and determining will. That, we say, is the tendency of the scientific method,—to find its principles in history, to make its actions of to-day nothing but the logical sequence of its actions of yesterday and the day be- fore, to substitute for questions of right and wrong a discussion as to" the logic of events," to damp effort and enthusiasm with point- ing out that nature does nothing by spasm, and that her greatest changes even are gradual and pendulous, not cataclysmal,—in a word, to make man the mere interpreter of the actual universe of nature beneath him, and not even in the slightest degree its

master and lord. The reason why it is thought by the scientific critic so much more disgraceful to be ignorant of the causes of the trade winds or of electric currents than of the gems of Greek literature, is that in learning the former we learn to interpret the action of forces far greater than ourselves, and quite independent of ourselves, while in becoming acquainted with the latter, we may very likely be fostering in ourselves mistaken dreams of human power and misleading aspirations after impossible good.

Yet are not the higher politics and ethics of the present day saturated with this scientific fatalism, this wish to be guided by exiting tendencies without doing anything to form them,—this in- difference to what sort of thing it is which is possible, so long only as we make no wild attempt at the impossible? With regard to Reform, for instance, there is not a statesman who dares propose what he secretly believes to be just, for he argues that public opinion will not bear any interruption of the general drift of events since 1882. So, with regard, first, to Italy, and then to Germany, politicians of all parties in England made the great mistake of mis- interpreting " the logic of events " in the very name of that logic.

They saw that a " cataclysm " was needed to set Italy free and to unite Germany, and so inveterate was their dislike of cataclysms, that though the time was come, and nothing but effort,—moral -ehoice,--the volition of free men.—was needed, they preached patience, endurance, apathy, blind trust in natural processes, rather than encourage the effort. And so with regard to Ireland ; while everything cries out for a great and fundamental change in our administration there, the pseudo-scientific habit of expecting nature to heal wounds which man has not only made, but keep& inflamed, is so universal, that we have very little reason to hope that anything will be done. In short, the scientific bias of mind is liable to its own superstitions, of which the chief is the irrational habit of supposing that all for which the times are really ripe will get itself done without anybody's effort, and that the times cannot be ripe for anything which it takes an unpleasant amount of spas- modic volition to achieve.

patience and cool insight of scientific moods of expectation. All the interpreting and expectant intellect in the world will never make the earth better without action, and scarcely without that ad- venturous action which by no means indulges any scientific certainty that the signs of the time are ripe for it. Luther assuredly did not believe the times ripe for his revolt against the moral corrup- tion of Rome, but relied only on the mighty arm of God. John. Brown did not think and did not find the times ripe for the death-blow which he gave to slavery, though he did so much to. ripen them for it. The scientific habit of mind should after all be but a small element in any great man's attitude towards the future. Without free resolves which, if they are not in any way inconsistent with the " principle of continuity," still are not con- sequences of it, and radically alter the distribution of the various. forces of the universe, even if they do not add to them, nay, without• faith in the divine Will of a power behind " the principle of con- tinuity," we shall fare a great deal worse with all our science than the old world—which had no true science, and had much evil superstition—fared, with its energy often misplaced, and its faiths. often mistaken, before science had arisen to swell the intellectual side of man's nature at the expense of his religion, his conscience, and his will.