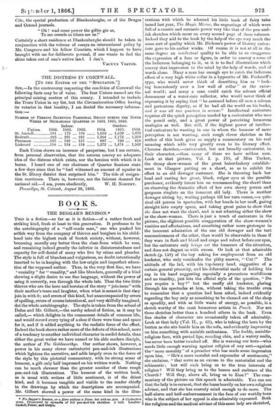 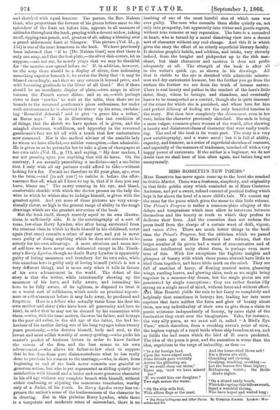 • greatest spirit. Aud yet none of these pictures are very excep- tionally clever, so high is the general range of ability in the rough -drawings which are the greatest attraction of the book.

But the book itself, though scarcely equal to its own illustra- tions, is sufficiently able. It is the autobiography of a sort of tame, low-class Barry Lyndon, who after being extricated from the criminal class in which he finds himself in his childhood, never .again (but once) commits a crime of any sort, and yet is never once guilty of doing anything which he does not conceive to be strictly for his own advantage. A more atrocious and mean sort of self-love we have never seen delineated except in Mr. Thack- eray's Barry Lyndon, though no doubt Barry Lyndon is apparently guilty of loving meanness and treachery for its own sake, while this nameless hero is guilty only of loving himself (which is not a very different thing), and is mean only when it tells in favour of his own advancement in the world. The defect of the story is that the writer, while intentionally showing up the meanness of his hero, and fully aware, and intending his hero to be fully aware, of its ugliness, is disposed to treat it as a venial sort of selfishness, which needs no practical repent- ance or self-abasement before it may fade away, be pardoned and forgotten. Here is a fellow who actually turns from his door his own mother and sister (who have been all generosity and love to him), in order that he may not be shamed by his connection with them,—who, with the same motive, disowns his father, and betrays to the poor old sailor, in the old age of the latter, the bad be- haviour of his mother during one of his long voyages taken twenty Tears previously,—who devotes himself, body and soul, to the lowest and most selfish worship of money-getting,—who picks his master's pocket of business letters in order to know further the secrets of the firm and the best means to his own advancement,—who allows his father-in-law elect to suppose that he has done from pure disinterestedness what he has really done to purchase his consent to the marriage,—who, in short, from beginning to end of the book never commits one grateful or generous action, but who is yet represented as sliding quietly into satisfaction with himself and a better and more generous character in his old age without any complete breach with himself, without .either confessing or abjuring the monstrous treacheries, worthy only of a Judas, of his youth. In Barry Lyndon every line ex- presses the author's sense of the loathsomeness of the character he is drawing. But in this plebeian Barry Lyndon, while there is a temperate and moderate sense of misconduct, there is no loathing of one of the most hateful sins of which man was ever guilty. The man who commits them slides quietly on, not only into prosperity, but apparently into virtue and gentle regrets, without true remorse or any reparation. The hero is a scoundrel at heart, who is turned by a moral dissolving view into a decent sort of character without any real change. And this it is which gives the story the effect of an utterly superficial literary faculty. It sketches people's habits, and oddities, and tricks, very cleverly indeed, from the burglar and pickpocket up to the rich mer- chant, but their characters and motives it does not probe adequately at all. The strength of the book is after all in the writer's quick eye, as shown in his drawings. All that is visible to the eye is sketched with admirable minute- ness and dry caricaturist humour, but the further you go from the surface the further we are from the truth of human nature. There is real beauty and pathos in the conduct of the hero's little sister, Sissy, whom he betrays, and abandons, and eventually leaves to be transported as a convict, though she is quite innocent of the crime for which she is punished, and whose lave for him and perfect delicacy of feeling are the only beautiful touches in the story. But then how completely the denouement, even in her case, belies the character previously sketched. She ends in being a mere vulgar, common-place woman of the world, after showing a beauty and disinterestedness of character that were really touch- ing. The end of the book is its worst part. The story is a very poor autobiography, and a worse novel ; but it is full of ability, capacity, and humour, as a series of superficial sketches of manners, and especially of the manners of tradesmen, touched off with a very happy power of caricature. If the author is a beginner, we do not doubt that we shall hear of him often again, and before long not anonymously.