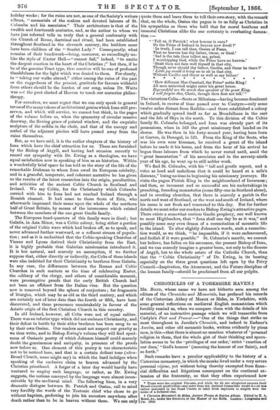 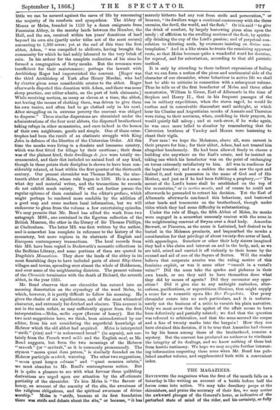 CHRONICLES OF A YORKSHIRE HAVEN.t

Ma. Boxn, whose name we have not hitherto seen among the editors of the Chronicles and Memorials, has prefaced his records of the Cistercian Abbey of Meaux or Melsa, in Yorkshire, with some general reflections on mediaeval English monasticism which forcibly remind us, when we compare them with the details of his material, of an instructive passage which we will transcribe from Carlyle's Past and Present:—" One of the things that strike us most throughout in Jocelin's Chronicle, and indeed in Eadmer's Anselm, and other old monastic books, written evidently by pious men, is this—that there is almost no mention whatever of personal religion in them, that the whole gist of their thinking and specu- lation seems to be the privileges of our order,' strict exaction of our dues,' God's honour' (meaning the honour of our Saint), and so forth."

Such remarks have a peculiar applicability to the history of a Cistercian monastery, in which the monks lived under a very severe personal regime, yet without being thereby exempted from finan- cial difficulties and litigations consequent on the continual ex- tension of the fraternity, so that they often experienced how

• These were the original Fenian*, and while we do not altogether censure their Broad-Church proclivities—any more than the Judicial Committee would do—it was rather untoward in the Head Centre to label Irish aspirants to empire with the name of a defeated clan.

Chroniea Monasterii de Melee, Auctore 17totna de Burton Abbate. Edited by E. A. Bond, do., under the direction of the Master of the Bolls. London: Longmansand Co. 1860. little we can be secured against the cares of life by renouncing the majority of its comforts and sympathies. The Abbey of Meaux or Melsa, founded in 1150 by a dozen emigrants from Fountains Abbey, in the marshy lands between the Humber, the Hull, and the sea, received within ten years' donations of land beyond its own site (partly under titles not of the most secure) amounting to 1,300 acres ; yet at the end of this time the first abbot, Adam, " was compelled to abdicate, having brought the community for which he had nobly laboured to the very brink of rain. In his ardour for the complete realization of his aims he formed a congregation of forty monks. But the revenues were insufficient for their maintenance ; perhaps the lawsuit with Archbishop Roger had impoverished the convent. [Roger was the third Archbishop of York after Henry Murdac, who had by charter given some considerable estates to the abbot. Roger afterwards disputed this donation with Adam, and there was some sharp practice, our editor admits, on the part of both claimants.] While receiving novices, as many as eleven at a time, the abbot, not having the means of clothing them, was driven to give them his own tunics, and often had to go clothed only in his cowl. After struggling on in extreme poverty the convent was obliged to disperse." Three similar dispersions are chronicled under the administrations of the four next abbots, the dispersed brotherhood taking refuge in other monasteries, and once indeed in the homes of their own neighbours, gentle and simple. One of these catas- trophes had been the result of an obstinate struggle with King John in defence of the liberties of the Cistercian Order. All this time the monks were living in a desolate and lonesome country, which was first fitted for tillage by their exeitions ; their dress was of the plainest kind, their dwellings de jure were totally un- ornamented, and their diet included no animal food of any kind, though in these points their discipline is shown to have been con- siderably relaxed, at least within the first quarter of the thirteenth century. Our present chronicler was Thomas Burton, the nine- teenth abbot of Melsa, whose rule began in 1396. He is a some- what dry and material writer, and the transactions he records do not exhibit much variety. We will not further pursue the regular epitome of them contained in the editor's preface, which might perhaps be rendered more readable by the addition of a good map and some modern local information, but we will endeavour to glean from the volume a few entertaining episodes. We may premise that Mr. Bond has edited the work from two autograph MSS., one contained in the Egerton collection of the British Museum, the other in the library of Sir Thomas Phillips, at Cheltenham. The latter MS. was first written by the author, and is somewhat less complete in reference to the history of the monastery, but more copious in its abstracts of English and European contemporary transactions. The local records from this MS. have been copied in Dodsworth's monastic collections in the Bodleian Library, and some portions of them are quoted in Dugdale's Monasticon. They show the lands of the abbey in its most flourishing days to have included parts of about fifty-three villages and towns, spreading over almost the whole of Holderness, and over some of the neighbouring districts. The present volume of the Chronicle terminates with the death of Richard, the seventh abbot, in the year 1235.

Mr. Bond observes that our chronicler has entered into an amusing dissertation on the etymology of the word Melsa, in which, however, it is partly difficult to follow his meaning. He gives the choice of six significations, each of the most whimsical character, and extremely far-fetched and obscure. This account is not in the main unfair, as may sufficiently appear from the first interpretation—Melsa, mellis sapor (flavour of honey). But the two next suggestions have, we think, been misunderstood by our editor, from his not considering the superficial knowledge of Hebrew which the old abbot had acquired. Melsa is interpreted " strife " (rixa) and "in unleavened bread" (in azymis), not cer- tainly from the French word melje and the English meal, as Mr. Bond suggests, but from the two meanings of the Hebrew " massah " (or " mattsah," as it is commonly pronounced). The etymon " messa quasi dans potum," is similarly founded on the Hebrew participle mashteh, watering. The other two suggestions, " messa quasi hospss salvans " and " quasi mensura sa/utis," we must abandon to Mr. Bond's contemptuous notice. But it is quite a pleasure to sea with what fervour these quibbling derivations are urged upon our attention by the affectionate partiality of the chronicler. To him Melsa is "the flavour of honey, on account of the amenity of the site, the sweetness of the religious obligations, and the spiritual sweetness of divine worship." Melsa is "strife, because at its first foundation there was strife and debate about the site," or because, " it has

scarcely hitherto had any rest from strife and persecution," or because, " its dwellers wage a continual controversy with the three enemies, the devil, the world, and the flesh." Or itis said " to give the drink of comfort, by largely bestowing pious alms upon the needy ; of affliction to the swelling motions of the flesh, by spiritu- ally drinking the cup of the Lord's passion; and of perpetual con- solation to thirsting souls, by evermore insisting on divine con- templation." And in a like strain he treats the remaining apparent roots, so that Melsa becomes quite a wonderful word for doctrine, for reproof, and for exhortation, according to that old patristic method.

It is only by attending to these indirect expressions of feeling that we can form a notion of the pious and sentimental side of the character of our chronicler, whose behaviour in active life we shall best be able to criticize in connection with a subsequent volume. Thus he tells us of the first benefactor of Melsa and three other monasteries, William le Groos, Earl of Albemarle in the time of Stephen and Henry II., that in his frequent passages of the sea in military expeditions, when the storm raged, he would lie restless and in conceivable discomfort until midnight, at which hour his Cluniac and Augustinian monks of Aumale and Thornton were rising to their nocturne, when, confiding in their prayers, he would quietly fall asleep ; and at cock-crow, if he woke again, he was once more lulled to slumber by remembering that the Cistercian brethren of Vaudey and Meaux were hastening to chant their vigils.

Poor man ! we hope the Melsmans, above all, were earnest in their prayers for him ; for their abbot, Adam, had not treated him altogether handsomely. He had been allowed freely to choose a building site anywhere on the Earl's estate, and he insisted on taking one which his benefactor was on the point of exchanging on terms extremely satisfactory to him. All was in readiness for the legal transfer ; and on a sudden the monk saw the spot and desired it, and took possession in the name of God and of His Mother, and just as if he had been fulfilling a prophecy,—" The mount of the Lord's house shall be established on the top of the mountains," or in vertice montis, and of course he could not afterwards be persuaded to retract his decision. Yet the Earl of Albemarle afterwards condoned this behaviour, and bestowed other lands and tenements on the brotherhood, though under titles which they had some difficulty in substantiating.

Under the rule of Hugo, the fifth Abbot of Melsa, its monks were engaged in a somewhat unseemly contest with the nuns in the neighbouring convent of Swyne over a dead body. Amandus Stewart, or Pincerna, as the name is Latinized, had desired to be buried in the Melsasan precincts, and bequeathed the monks a consideration for that privilege of about twenty-five acres of land, with appendages. Somehow or other their holy sisters imagined they had a like claim and interest on and in the body, and, as we are told, seized and carried it off violently to their house by the counsel and aid of one of the Sayers of Sutton. Will the reader believe that corporate avarice was the ruling motive of this feminine exploit, or was it some other " tumult in a vestal's veins?" Did the nuns take the spades and pickaxes in their own hands, or are they said to have themselves done what they did by means of agents? Did they encounter any oppo- sition ? Did it give rise to any midnight ambushes, alter- cations, pacifications, or superstitious illusions, that might supply a scene for a romantic opera. like Der Freyschiitz. Our prosy chronicler enters into no such particulars, and it is unfortu- nately not the business of a critic to varnish his plain narrative. Only we must avow that the upshot of the affair seems to have been defectively and partially related ; we find that the question was referred to arbitration, and that the nuns secured the corpse and a fine of twenty marks into the bargain How they can have obtained this decision, if it be true that Amandus had chosen to lay his bones among those of the brotherhood, remains a mystery. But the convent has produced no authoress to vindicate the integrity of its dealings, and we know nothing of these but from hostile testimony. We hope we may acquire further interest- ing information respecting these nuns when Mr. Bond has pub- lished another volume, and supplemented both with a convenient index.