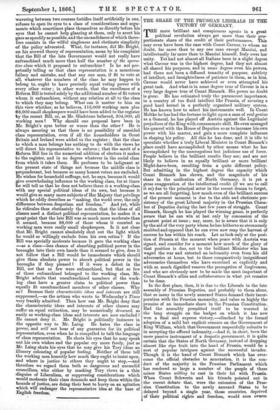 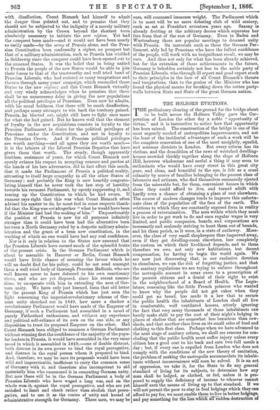 Page 5, 1 September 1866 — THE SHARE OF THE PRUSSIAN LIBERALS IN THE VICTORY OF
Close

THE SHARE OF THE PRUSSIAN LIBERALS IN THE VICTORY OF

THE more brilliant and conspicuous agents in a great political revolution always get more than their pro- portionate share of the credit of their performances. This may even have been the case with Count Cavour, to whom no doubt, far more than to any one man except Mazzini, and intellectually far more than to Mazzini himself, Italy owes her unity. Yet had not almost all Italians been in a slight degree what Cavour was in the highest degree, had they not almost all shared his purposes, and in some degree even his powers, had there not been a diffused tenacity of purpose, subtlety of intellect, and farsightedness of patience in them, as in him, Cavour would never have achieved or even attempted his great task. And what is in some degree true of Cavour is in a very large degree true of Count Bismark. His power no doubt is great. He has estimated truly the paramount importance, in a country of too fluid intellect like Prussia, of securing a good hard kernel in a perfectly organized military system. He has known how to select his instruments well. In Count Moltke he has had the fortune to light upon a man of real genius as a General, he has played off Austria against the Legitimist prejudices of the King with consummate skill. He even managed his quarrel with the House of Deputies so as to increase his own power with his master, and gain a more complete influence in shaping his policy. All this he has done, and it is idle to speculate whether a truly Liberal Minister in Count Bismark's place could have accomplished by other means what he has 'accomplished by the unscrupulous but judicious use of force. People believe in the brilliant results they see; and are not likely to believe in an equally brilliant or more brilliant Might-have-been, resulting from a quite different policy. But admitting in the highest degree the capacity which Count Bismark has shown, and the magnitude of his share in the unification of North Germany, it is yet a gross exaggeration of the intellectual credit (if we are to call it so) due to the principal actor in the recent drama to forget, as we are all forgetting, how much even of the brilliant success of the present moment is due to the able and obstinate per- sistency of the great Liberal majority in the Prussian Cham- ber of Deputies during the last few years of struggle. Count Bismark, though he has played the winning game, is perfectly aware that he can win at last only by concession of the greatest point at issue ; nay, more, he is aware that it is only by the aid of the very party whom he has hitherto so strenuously snubbed and opposed that he can even now reap the harvest of success he has within his reach. Let us look only at the posi- tion of Prussia at the moment when peace with Austria was signed, and consider for a moment how much of the glory of that position is due, not to the brilliant Minister who has waged the war and extorted an indemnity even from his old adversaries at home, but to those comparatively insignificant adversaries themselves who have exercised so explicitly and with so much dignified reserve the prerogative of forgiveness, and who are obviously now to be made the most important of Count Bismark's allies and collaborateurs in what yet remains to be done.

In the first place, then, it is due to the Liberals in the late assembly of Prussian Deputies, and probably to them alone, that so many in the newly annexed States demand their incor- poration with the Prussian monarchy, and value so highly the promise of an immediate share in the Prussian Constitution. Had the assembly permitted itself to be worsted in the long struggle on the budget on which it has now won a final and express victory,—clinched by the formal adoption of a mild but explicit censure on the Government of King William, which that Government respectfully submits to in accepting the offered indemnity,—had it, in short, been the mere passive instrument of a despotic government, it is quite certain that the States of North Germany, instead of dropping almost like ripe fruit into the hand of Prussia, would be a nest of popular intrigues against the successful invader. Though it is the hand of Count Bismark which has over- come the official obstacles to annexation, it is the con- duct of the majority in the Prussian Parliament which has rendered so large a number of the people of these minor States willing to cast in their lot with Prussia. When Count Schwerin and his friends pointed out in the recent debate that, were the extension of the Prus- sian Constitution to the newly annexed States to be delayed beyond a single year, those countries, deprived of their political rights and freedom, would soon swarm