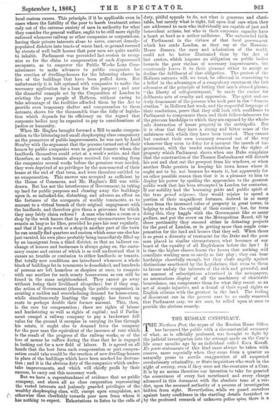 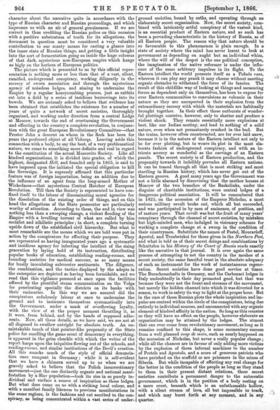 Page 7, 1 September 1866 — THE RUSSIAN CONSPIRACY. T HE IVOrthern Post, the organ of the
Close

THE RUSSIAN CONSPIRACY. T HE IVOrthern Post, the organ of the

Russian Home Office, has favoured the public with a circumstantial summary of what, as is officially professed, was brought to light by the judicial investigation into the attempt made on the Czar's life some months ago by an individual called Kara Kosoff. Ex parte statements of this kind must always be taken with reserve, more especially when they come from a quarter so naturally prone to servile exaggeration of all suspected revolutionary criminality, or State inquisitors who work in the night of secrecy, even if they were not the creatures of a Czar; It is by no means therefore our intention to take for granted the correctness of every fact mentioned and every charge advanced in this document with the absolute tone of a ver- dict, upon the assumed authority of a process of investigation hidden from sight. Nevertheless, while we guard ourselves against hasty confidence in the startling details furnished us by the professed research of unknown police spies, there is a

character about the narrative quite in accordance with the type of Russian character and Russian proceedings, and which impresses us with an air of general genuineness. If we are correct in thus crediting the Russian police on this occasion with a positive substratum of truth for its allegations, the document in question must be considered a very valuable contribution to our scanty means for casting a glance into the inner state of Russian things, and getting a little insight into the sort of fermentation going on inside the huge colossus of that dark, mysterious non-European empire which hangs so bigly on the horizon of European politics.