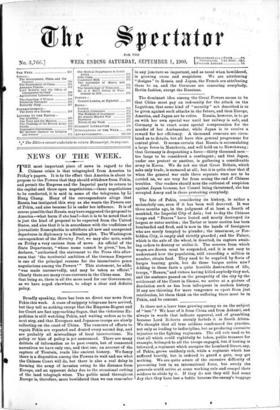 Page 1, 1 September 1900 — Broadly speaking, there has been no direct war news from
Close

Broadly speaking, there has been no direct war news from

Pekin this week. A mass of snippety telegrams have arrived, but they tell us nothing except that the Empress-Regent and her Court are fast approaching Segan, that the victorious Ex- pedition is still watching Pekin, and waiting orders as to its next step, and that European and Japanese troops are slowly collecting on the coast of China. The rumours of efforts to regain Pekin are repeated and denied every second day, and are probably all misreadings of local insurrections. No policy or hint of policy is yet announced. There are many driblets of information as to past events, but of connected narratives we have only one, and that one, an account of the capture of Tientsin, reads like ancient history. We fancy there is a disposition among the Powers to wait and see what the Chinese Court will do, but there is also a real delay in forming the army of invasion owing to the distance from Europe, and an apparent delay due to the occasional cutting of the land telegraph wires. The public mind throughout Europe is, therefore, more bewildered than we can remember in any juncture so important, and as usual when bewildered, is growing cross and suspicious. We are attributing "designs" to Russia and Japan, the French are attributing them to us, and the Germans are censuring everybody, Berlin fashion, except the Russians.