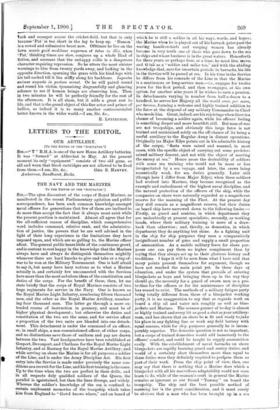 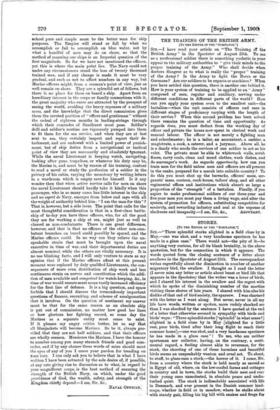 THE NAVY AND THE MARINER

To THE EDITOR OP TIM "SPECTATOR."]

school pure and simple must be the better man for ship purposes. The Empire will stand or fall by what we accomplish or fail to accomplish on blue water, not by what a handful of men may do on shore, so that the method of manning our ships is an Imperial question of the first magnitude. So far we have not mentioned the officers, yet this is where the main point lies. The Navy could not under any circumstances stand the loss of twenty thousand trained men, and if any change is made it must be very gradual, and such as not to affect numbers in any way, but Marine officers might, from a seaman's point of view, just as well remain on shore. They are a splendid set of fellows, but there is no place for them on board a ship. Apart from an hereditary interest in the corps or family connections with it, the great majority who enter are attracted by the prospect of seeing the world, avoiding the heavy expenses of a military mess, and the knowledge that the direct commission gives them the coveted position of "officer and gentleman" without the ordeal of eighteen months in leading-strings through which their comrades of Sandhurst must pass. Soldier's drill and soldier's routine are vigorously pumped into them to fit them for the sea service, and when they are at last sent to sea, they certainly inspect and report their de- tachment, and are endowed with a limited power of punish- ment, but of ship duties from a navigational or tactical point of view they are necessarily and absolutely ignorant. While the naval Lieutenant is keeping watch, navigating, looking after guns, torpedoes, or whatever his duty may be, the Marine is, and must be by reason of his training, content to read a novel or study the profession of a soldier in the privacy of his cabin, varying the monotony by writing letters in a wardroom which is empty save for himself. Is it any wonder then that when active service calls for men on shore the naval Lieutenant should hardly take it kindly when this passenger, who in so many cases has little interest in the ship and no esprit de Navy, emerges from below and says with all the weight of authority behind him : "I am the man for this" ? That is, however, but a side issue. The point that calls for the most thoughtful consideration is that in a first-class battle- ship of to-day you have three officers, who, for all the good they are for working a ship at sea, might just as well be classed as non-combatants. There is one great difference, however, and that is that no officers of the other non-com- batant branches on board could possibly be spared, and the Marine officers could. In no way can they relieve the un- speakable strain that must be brought upon the naval executive in time of war, and their departmental duties are almost nominal, while the others are vitally necessary. It is no use blinking facts. and I will only venture to state as my opinion that if the Marine officers afloat at this present moment were replaced by duly qualified Lieutenants, the con- sequences of more even distribution of ship work and less continuous strain on nerves and constitution which the addi- tion of men available and competent for watch-keeping, &c., in time of war would ensure must mean vastly increased efficiency for the first line of defence. It is a big question, and space forbids that I should discuss the tremendously important questions of finance, recruiting, and scheme of amalgamation that it involves. On the question of sentiment my answer must be that for the same reason as an obsolete ship is put out of commission, no matter how good her lines or how glorious her fighting record, so some day the Marines as a separate entity must cease to exist. If it pleases my angry critics better, let us say that all bluejackets will become Marines. So be it, always pro- vided that they are not half soldiers, and that their officers are wholly seamen. Messieurs the Marines, I have the honour to number among you many staunch friends and good com- rades, and if by any chance these words of mine should meet the eyes of any of you I crave your pardon for treading on your toes. I can only ask you to believe that in what I have written I have been actuated by the sole desire of, if possible, at any rate giving rise to discussion as to what, in regard to your magnificent corps, is the best method of ensuring the strength of the British Navy, on which, under the good providence of God, the wealth, safety, and strength of the Kingdom chiefly depend.—I am, Sir, &a.,