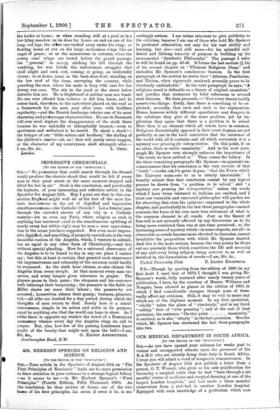 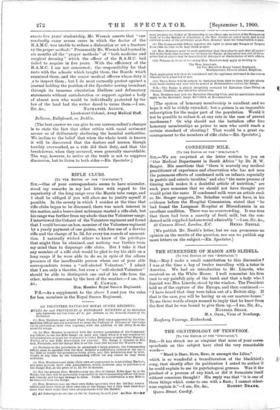 Page 15, 1 September 1900 — OUR MEDICAL DEPARTMENT IN SOUTH AFRICA. [To THE EDITOR OP
Close

OUR MEDICAL DEPARTMENT IN SOUTH AFRICA. [To THE EDITOR OP

THE "SPECTATOE:1 Sm—As you have opened your columns for weeks past to violent and unsupported attacks upon the personnel of the R.A.M.C. who are silently doing their duty in South Africa, I treat you will admit a word of temperate remonstrance. In the Spectator of August 25th you publish a letter from a person, G. T. Wrench, who gives as his sole qualification for becoming a surgical critic that he had "been through a six months' course of medicine and surgical dressing at one of the largest London hospitals," and had made a three months' observation from a sick-bed in another London hospital. Equipped with such knowledge of a profession which now exacts five years' studentship, Mr. Wrench asserts that "one constantly came across cases in which the doctor of the R.A.M.C. was unable to reduce a dislocation or set a fracture by the proper methods." Presumably Mr. Wrench had learned in six months all the "proper methods" of "both medicine and surgical dressing" which the officer of the R.A.M.C. had failed to acquire in five years. With the. efficiency of the R.A.M.C. I am not concerned ; the 'responsibility for that rests with the schools which taught them, the Boards which examined them, and the senior medical officers whose duty it to inspect them ; but I do most earnestly protest against a Journal holding the position of the Spectator sowing broadcast through its immense circulation libellous and defamatory statements without corroboration or support against a body of absent men who would be individually protected by the law of the land had the writer dared to name them.—I am,

[The best answer we can give to our correspondent's charges is to state the fact that other critics with equal acrimony accuse us of deliberately sheltering the hospital authorities. We incline to the belief that when the whole truth is known it will be discovered that the doctors and nurses, though terribly overworked, as a rule did their duty, and that the breakdowns, when they occurred, were generally unavoidable. The way, however, to arrive at the truth is not to suppress discussion, but to listen to both sides.—ED. Spectator.]