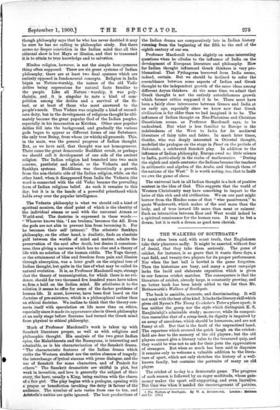 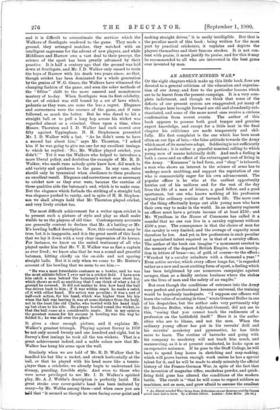 THE WALKERS OF SOUTHGATE.*

Iv has often been said, with scant truth, that Englishmen take their pleasures sadly: - It might be asserted, without fear of denial, that they take them seriously. The game of cricket, for instance, is so grave that it wants three days, a vast field, and twenty-two players for its proper performance. Nor when the last ball is bowled is the game forgotten. Then the historians are busy, and many a great campaign lacks the lucid and elaborate exposition which is given to our famous cricket matches. The consequence is that the literature of cricket, already large, is constantly growing, and no better book has been lately added to the list than Mr. Betteswoith's WaMere of Southgate.

The book is amiable, accurate, and discriminating. It will not rank with the best of its kind. It la,cks the literary skill which gives old Nyren's The Young CI ieketer's Tutor a place apart; it has neither the grasp nor the style which distinguish K. S. Ranjitsinhji's admirable study; moreover, while its composi- tion resembles that of a scrap-book, its dignity is impaired by an array of anecdotes, which should be humorous, and are not funny at all. But that is the fault of the unpractised hand. The repartees which aroused the quick laugh on the cricket- field are dear to the memory of the old players ; but the old players cannot give a literary value to the treasured quip, and they would be wise not to ask for their jests the appreciation of strangers. But when so much has been said in dispraise it remains only to welcome a valuable addition to the litera- ture of sport, which not only sketches the history of a well- known family, but contains the portraits of many an old, player.

The cricket of to-day is a democratic game. The progress of each season is followed by an eager multitude, whose gate- money makes the sport self-supporting, and even lucrative. But trine vras when it needed the encouragement of patio:Ms,

and it is difficult to overestimate the services which the Walkers of Southgate rendered to the game. They made a ground, they arranged matches, they watched with an intelligent eagerness for the advent of new players, and while Middlesex and Harrow owe a vast deal to their precept, the science of the sport has been greatly advanced by their practice. It is half a century ago that the ground was laid down at Southgate, and Mr. I. D. Walker only ceased to train the boys of Harrow with his death two years since; so that, though cricket has been dominated for a whole generation by the genius of W. G. Grace, the Walkers have witnessed the changing fashion of the game, and seen the sober methods of the " fifties " shift to the more assured and monotonous mastery of to-day. When Southgate won its first celebrity, the art of cricket was still bound by a set of laws which, pedantic as they were, are none the less a regret. Elegance and correctness were the essence of the game, and if runs followed, so much the better. But he who dared to hit a straight ball or to pull a long hop across his wicket was regarded almost as a criminal. Once upon a time, when Messrs. Thornton and I. D. Walker had each scored over fifty against lippingham, H. H. Stephenson presented Mr. I. D. Walker with a bat. "As he didn't seem to have a second bat about him," says Mr. Thornton, "I asked him if he was going to give me one for my excellent innings, to which he replied : 'No; Mr. Walker played cricket, you didn't." Yet it was the Walkers who helped to introduce a more liberal policy, and doubtless the example of Mr. R. D. Walker, who made runs nobody quite knew how, did much to add variety and quickness to the game. In any case, rules ahould only be tyrannical when obedience to them produces an excellent result. Elegance and correctness are as necessary to cricket now as they ever were, because the exercise of these qualities aids the batsman's end, which is to make runs. But the elegance which forbade the striking of a straight ball was elegance pushed to vanity, and in spite of H. H. Stephen- son we shall always hold that Mr. Thornton played cricket, and very lively cricket too.

The most difficult achievement for a writer upon cricket is to present such a picture of style and play as shall make visible to us the players of old time. Contemporary accounts are generally content to declare that Mr. A's batting or Mr.

B's bowling baffled description. Now, this confession may be true, but it is inapposite, and it is the great merit of this book that we lay it down with a very clear impression of its heroes. For instance, we know on the united testimony of all who played under him that Mr. V. E. Walker was as fine a captain as ever lived ; we know also that he was a sound and graceful batsman, hitting chiefly on the on-side and not sparing straight balls. But it is only when we come to Mr. Rutter's account of his bowling that we seem to see him :—

" He was a most formidable customer as a bowler, and he was the most athletic fellow I ever saw in a cricket field. I have seen him catch a man behind the batsman's wicket near short leg, which shows as well as anything that I can think of what a lot of ground he covered. It did not matter to him how hard the ball was driven back to him ; if It was within reach he made a catch of it with either hand. His action was peculiar; it was a sort of half-cock action, for his hand, which was higher than his hip when the ball was leaving it, was at some distance from the body, not in the least like old Clarke, who bowled with his hand high up but close to his side. He always bowled round the wicket, so that the ball came at a considerable angle. But in my opinion the greatest reason for his success in bowling was the way he fielded it ; he was all over the place."

It gives a clear enough picture, and it explains Mr. Walker's greatest triumph. Playing against Surrey in 1859 he not only scored twenty and one hundred and eight, but in surrey's first innings he took all the ten wickets. That is a great achievement indeed, and a noble solace now that Mr. Walker has hung his arms upon the wall.

Similarly when we are told of Mr. R. D. Walker that he handled his bat like a racket, and struck horizontally at the ball, or that he played with his head more like a tennis- player than a cricketer, we already begin to understand his clumsy, puzzling, forcible style. And even to those who

were never privileged to see Mr. I. D. Walker's spirited play, Mr. A. J. Webbe's description is perfectly lucid. His great stroke over cover-point's head has been imitated by many—by Mr. Webbe among them—and when once you are tuld that "it seemed as though he were facing cover-point and

making straight drives," it is easily intelligible. But that is the peculiar merit of this book : being written for the most part by practical cricketers, it explains and depicts the players themselves and their famous strokes. It is not con- tent with praise, it must justify its praise, and for this it may be recommended to all who are interested in the best game ever invented by man.