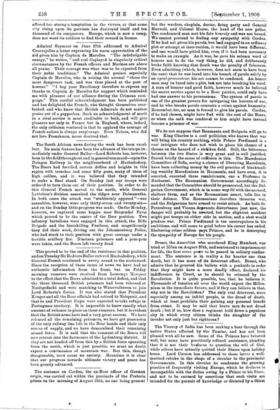 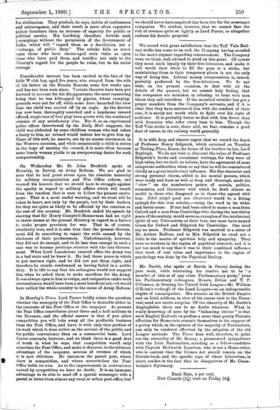 Page 2, 1 September 1900 — The Viceroy of India has been making a tour through
Close

The Viceroy of India has been making a tour through

the native States affected by the Famine, and has not been pleased with all he saw. Some of the Princes have behaved well, but some have practically refused assistance, pleading that it is not their business to question the will of God, while others have actually quitted their States upon holiday tours. Lord Curzon has addressed to these latter a well- merited rebuke in the shape of a circular to the provincial Governments. In this circular he condemns the growing practice of frequently visiting Europe, which he declares is incompatible with the duties owing by a Prince to his State, and not to be excused by assertions that such visits are intended for the pursuit of knowledge or dictated by a thirst for civilisation. They produce, he says, habits of restlessness and extravagance, and their result is more often expensive palace furniture than an increase of capacity for public or political service. His Lordship therefore forbids such journeyings without the permission of the Government of India, which will "regard them as a dereliction, not a discharge, of public duty." The rebuke falls as much upon those who have encouraged such visits as upon t hose who have paid them, and testifies not only to the Viceroy's regard for the people he rules, but to his social courage.