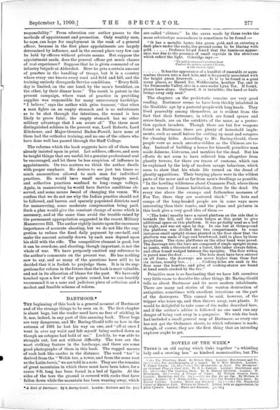 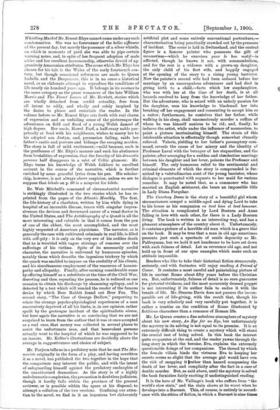 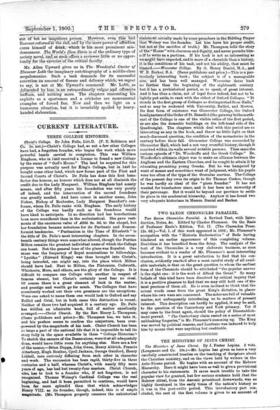 Whistling Maid of Mr. Ernest Rhys cannot come under any such condemnation. She was no forerunner of the belles siffieuses of the present day, but merely the possessor of a silver whistle, on which in moments of peril she was able to pipe certain warning notes, and, in spite of her frequent adoption of male attire and her excellent horsemanship, otherwise devoid of ag- gressively Amazonian attributes. The scene which Mr. Rhys has chosen for his tale is the Wales of the early fourteenth cen- tury, but though occasional references are made to Queen Isabella, and the Despensers, this is in no sense a historical novel, or an elaborate attempt to reproduce the conditions of life nearly six hundred yeara ago. It belongs in its essence to the same category as the prose romances of the late William Morris and The Forest Lovers of Mr. Hewlett, stories which are wholly detached from sordid actuality, free from all intent to edify, and wholly and solely inspired by the desire to please and entertain the reader. In the volume before us Mr. Ernest Rhys sets forth with real charm of expression and an unfailing sense of the picturesque the adventures on field and flood of a young Welsh damsel of high degree. Her uncle, Howel Fart, a half-crazy noble per- petually at feud with his neighbours, wishes to many her to his adopted son Jestyn, and, persuasion failing, raids her father's castle and pursues and kidnaps the escaping maiden. The story is full of mild excitement—mild because, such is the gentleness of Mr. Rhys's manner and such his abstinence from brutalities of expression, that the ferocity of his dramatis perscmw half disappears in a mist of Celtic glamour. Mr.

Rhys turns his knowledge of Welsh folklore to excellent account in the course of the narrative, which is further enriched by some graceful lyrics from his pen. His scholar- ship, however, is not always above suspicion, unless we are to suppose that bibule on p. 60 is a misprint for bibite.

Dr. Weir Mitchell's command of circumstantial narrative is strikingly illustrated in the two stories which he has re- printed from the pages of the Atlantic Monthly. The first, the life-history of a charlatan, written by him while dying in hospital of an incurable disease, traces with singular impres- siveness the devious and downward career of a venal doctor in the United States, and The Autobiography of a Quack is all the more interesting and valuable in that it comes from the pen of one of the ablest, the most accomplished, and the most highly respected of American physicians. The narrator, as is generally the case with cultivated criminals in real life, is filled with self-pity : it is only on the very eve of his sudden death that he is troubled with vague stirrings of remorse over the sufferings of his victims. Spite of its necessarily sordid character, the narrative is enlivened by humorous episodes, notably those which describe the ingenious trickery by which the quack was enabled to impose on the credulity of his clients, and his simultaneous employment of the resources of homceo- pathy and allopathy. Finally, after earning considerable sums by offering himself as a substitute at the time of the Civil War, deserting and then repeating the process, he is reduced on one occasion to obtain his discharge by shamming epilepsy, and is detected by a test which will remind the reader of the famous device by which Brer Rabbit found out Brer Fox. The second story, "The Case of George Dedlow," purporting to relate the strange psycho-physiological experiences of a man successively deprived of all his limbs, is, in our opinion, rather spoilt by the grotesque incident of the spiritualistic séance, but here again the narrative is so convincing that we are not surprised to learn from the author that it was at once accepted as a real case, that money was collected in several places to assist the unfortunate man, and that benevolent persons actually went to the hospital of which he was supposed to be an inmate. Mr. Keller's illustrations are decidedly above the average in suggestiveness and choice of subject.

Mr. Farjeon tells us in a prefatory note that he cast The Mes- merists originally in the form of a play, and having rewritten it as a novel, has published the two together in the hope that the comparison may interest the public, and with the intent of safeguarding himself against the predatory onslaughts of the unauthorised dramatiser. As the story is of a highly melodramatic complexion, the precaution is doubtless judicious, though it hardly falls within the province of the present reviewer, or is possible within the space at his disposal, to attempt a collation of the two versions. Confining our atten- tion to the novel. we find in it an ingenious but elaborately

artificial plot and some entirely conventional portraiture,— characterisation being practically crowded out by the pressure - of incident. The scene is laid in Switzerland, and the central' figure is a famous painter who possesses the gift of mesmerism—which he exercises pour is bon motif—is afflicted, though he knows it not, with somnambulism, and for the rest is a widower with a grown-up daughter, the only child of his first wife, and happily engaged at the opening of the story to a rising young barrister. Now the painter's second wife had been seduced before her marriage by an unscrupulous adventurer and had died in giving birth to a child,—facts which her stepdaughter, who was with her at the time of her death, is at all hazards resolved to keep from the knowledge of her father. But the adventurer, who is seized with an unholy passion for the daughter, uses his knowledge to blackmail her into breaking off her engagement and consenting to accept him as a suitor; furthermore, he contrives that her father, while walking in his sleep, shall unconsciously murder a ruffian of whom he was himself anxious to be rid; and, finally, he induces the artist, while under the influence of mesmerism, to paint a picture incriminating himself. The strain of this intolerable situation is effectually though somewhat clumsily relieved. Valerie, yielding to her father's peremptory com- mand, reveals the cause of her misery and the identity of Professor Laval with the betrayer of her stepmother, and the painter, after arranging for a sudden and clandestine marriage between his daughter and her lover, poisons the Professor and himself. The only humorous relief to the sentimental and criminal elements of which the story is compounded is fur- nished by a valetudinarian aunt of the young barrister, whose dialogue is punctuated with requests to her maid for various remedies. It may be noted that, as a commoner who has married an English aristocrat, she beam an impossible title in Lady Diana Farquhar.

The Courtesy Dame is the story of a beautiful girl whom circumstances compel a middle-aged and dying Lord to take to his house as his companion en tout bien et tout luraneter. The situation is complicated by Lord Bostem and Anne falling in love with each other, for there is a Lady Bostern living. The book is written in an interesting way, and has a pleasant atmosphere of the country about it. Unfortunately, it contains a picture of a horrible old man which is a grave blot on the book. It may be true that a man in old age sometimes presents just such a spectacle of senile depravity as Mr. Palfreyman, but we hold it not handsome to be here set down with such fulness of detail. Let us reverence old age, and not hold up in front of our eyes examples which make such an attitude impossible.

Readers who like to take their historical fiction strenuously, seriously, and with footnotes will enjoy reading A Friend of Ca3sar. It contains a most careful and painstaking picture of life in ancient Rome about fifty years before the Christian era. But, unfortunately, fulness of detail is no sure guarantee for pictorial vividness, and the most accurately dressed puppet is not interesting if its author fails to endue it with the breath of life. Mr. Stearns Davis does not possess the incom- parable art of life-giving, with the result that, though his book is very scholarly and very carefully put together, it is rather a treatise on the condition of Rome illustrated by fictitious characters than a romance of Roman life.

Mr. Le Queux creates a fine nebulous atmosphere of mystery about his new story, An Eye for an Eye, but unfortunately the mystery in its solving is not equal to its promise. It is an extremely difficult thing to create a mystery which will stand the crucial test of being solved. In this book the interest quite evaporates at the end, and the reader yawns through the long story in which the heroine, Eva, explains the extremely questionable doings of her companions. The thread by which. the female villain binds the virtuous Eva to keeping her secrets seems so slight that the average girl would have run the risk of snapping it 'rather than hazard compassing the death of her lover, and complicity after the fact in a case of double murder. But, as said above, until the mystery is solved the book furnishes fairly exciting if undistinguished reading.

It is the hero of Mr. Vallings's book who suffers from "the world's slow stain," and the stain shows at its worst when he develops into a Baronet This, of course, is entirely in accord- ance with the ethics of fiction, in which a Baronet is nine times

out of ten an iniquitous pei:son. HoWeyer, even this bad Baronet reformgat the az, .anny tlie-nierepOiver of affeetion cures himself of drink,- which- its -his- most prominent mis: demeanour. The World's Slow ?Stain is of the ordinary type of society novel, D.33,:a.ap such offersa reviewer little or no oppor- tunity for the exercise of the critical faculty. . . Mr. Allen *Upward gives us in The Wonderful Oilier of Ebenezer Lobb the imaginary autobiography of a middle-class megalomaniac. Such a task demands for its successful execution in amount'of finesse and delicacy which,' We regret to say-, is not at Mr. Upward's command: Mr: Lobb, as delineated by him is an extraordinarily -Vulgar and offensive buffoon, recounting his exploits as a sportsman and a cricketer are monumental examples of forced fun. Now and then we light on a humorous situation, but it is invariably spoiled by 1heavy- handed elaboration.