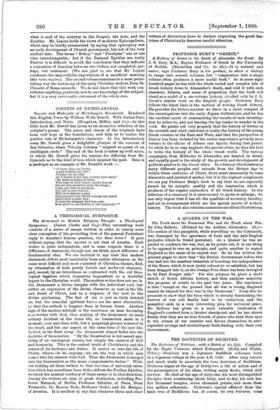 The Atonement in Modern Religious Thought : a Theological Symposium. (James Clarke and Co,)—This interesting work consists of a series of essays written in order to convey some clear conception of the prevailing view of the general Protestant reply to Anselm's famous question, Cur Deus home ? It goes without saying that the answer is not that of Anselm. Each writer is quite independent, and in some respects there is a difference of statement, though not, we think, much difference of fundamental idea. We are inclined to say that this modern statement differs most essentially from earlier utterances on the same most difficult and most contested of Christian themes, first, by elimination of both purely Jewish and mediteval elements, and, second, by an inwardness as contrasted with the old theo- logical legalism which Augustine bequeathed as a doubtful legacy to the Christian world. The modern writer does not see in the Atonement a divine bargain with the individual soul, but ' rather, an expression of the divine character as seen in the life and death of Christ, and as a response of the soul to the divine quickening. The fact of sin is just as truly insisted on, but the remedial spiritual forces are far more discernible, so that the outlook is happier than in former times. Another sign of the modern attitude is the insistence on man becoming a co-worker with God, thus making of the Atonement no mere solitary incident in the inner life, no transaction made in a moment, over and done with, but a perpetual process renewed in the heart, and but one aspect at the same time of the new life. Indeed, in the final essay, the Atonement almost fades into the doctrine of Incarnation. "By the Incarnation is not meant any- thing of an ontological nature, but simply the oneness of God and humanity. This is the central truth of Christianity and the source of its doctrines and duties. It carries us into the life of Christ, where—in its ongoing—we see the way in which man comes into his oneness with God. Thus the Atonement is merged into the Incarnation as the more comprehensive factor." With- out holding all these writers to that doctrine of universal salva- tion which has sometimes been deduced from the Pauline Epistles, we think the general tendency of these essays is in that direction. Among the writers are men of great distinction, including Pro- fessor Harnack, of Berlin, Professor Sabatier, of Paris, Dean Fremantle, Dr. Marcus Dods, Professor Gadd, and Dr. Munger, of America. It is needless to say that whatever these and other writers of distinction have to declare respecting the great doc- trines of Christianity deserves careful attention.