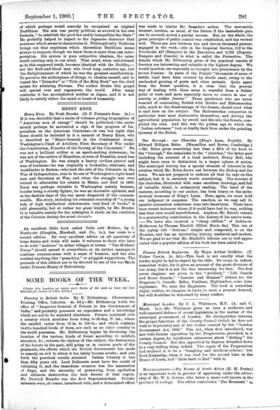 [Under this heading we notice such Books of the week as have not been reserved for review in other forms.]

Forestry in British India. By B.' Ribbentrop. (Government Printing Office, Calcutta. 4s. 6d.)—Mr. Ribbentrop holds the office of "Inspector-General of Forests to the Government of India," and probably possesses an experience and a knowledge which are not to be matched elsewhere. Forests scattered over a country which stretches from 8 deg. to 35 deg. N. lat., where the rainfall varies from 15 in. to 100 in., and which contains twelve hundred kinds of trees, are such as no other country in the world possesses. Mr. Ribbentrop begins by discussing the location of the various kinds of forest according to rainfall, elevation, &c., reviews the history of the subject, the destruction of the forests in the past, still going on in various parts of the peninsula, the efforts which the British Government has made to remedy an evil to which it has lately become awake ; and sets forth the practical results attained. Indian forestry is less than fifty years old. Lord Dalhousie must have the credit of initiating it, and the immediate occasion was the annexation of Pegu, and the necessity of preserving from spoliation and ultimate destruction the teak forests of that region. Mr. Dietrich Brandis was the first Superintendent. Private interests were, of course, interfered with, and a determined effort was made to hinder Mr. Brandis's action. The mercantile interest, careless, as usual, of the future if the immediate gain can be secured, scored a partial success. But on the whole, the great principle of public control was established, and has worked well. There are now between ten and eleven thousand persons engaged in the work,-200 in the Imperial Service, 112 in the Provincial, 437 (Rangers) in the Executive, and 9,759 (Deputy- Rangers and Guards) in what is called the Protective. The details which Mr. Ribbentrop gives of the practical results of forestry are interesting and valuable in the highest degree. We would mention one especially as brought into prominence by the recent Famine. In parts of the Punjab "thousands of acres of fertile land have been covered by sterile sand, owing to the unchecked grazing of goats and other animals. Quite apart from the forest question, it is clear that the present way of dealing with these areas is wasteful from a fodder point of view, and more especially leaves no reserve in case of scarcity or fodder famine." Those gentlemen who are never wearied of contrasting British with Hindoo and Mahommedan rule, much to the disadvantage of the former, should read what is said here on the subject. The Mahommedan conquerors in particular were most destructive themselves, and driving the agricultural population by sword and fire into the forests, com- pleted the ruin. And this was the golden age to which the "Indian reformers" look so fondly back from under the grinding tyranny of the Briton.