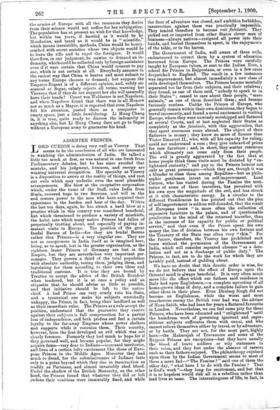 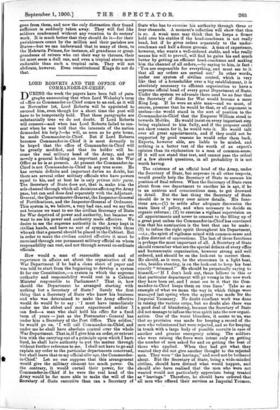 IORD CURZON is doing very well as Viceroy. That seems to be the conclusion of all who are interested in watching the administration of India. He talked a little too much at first, as was natural in one fresh from Parliamentary debates, but he has since avoided that mistake, and his judgment, firmness, and energy are winning universal recognition. His specialty as Viceroy is a disposition to arrive at the reality of things, and root out evils which may underlie even the most plausible arrangements. His blow at the co-optative corporation which, under the name of the Staff, rules India from Simla, restored hope to two Services, and will in the end restore power to the men who have acquired their experience in the burden and heat of the day. Within the last ten days, again, he has struck a hard blow at a practice which in this country was considered beneficial, but which threatened to produce a variety of mischiefs, the habit into which many native Princes had fallen of perpetually trotting about, and especially of paying in- cessant visits to Europe. The position of the great feudal Barons of India—for they are feudal Barons rather that Princes—is a very singular one. They are not so conspicuous in India itself as is imagined here, being, so to speak, lost in the greater organisation, as the eighteen lesser Princes of Germany are lost in the Empire, but they are nevertheless very important per- sonages. They govern a third of the total population with absolute authority, taxing them, judging them, and legislating for them according to their own ideas and traditional customs. It is true they are bound by Treaties to accept the advice of the British Resident when tendered, but it is at once a policy and an etiquette that he should advise as little as possible, and that initiative should be left to the native chief. A bad Prince can very nearly ruin his State, and a tyrannical one make his subjects wretchedly unhappy, the Prince, in fact, being their landlord as well as their immediate ruler. The Princes as a rule accept the position, understand that the guarantee they receive against their subjects is full compensation for a partial loss of independence, and both profess and feel a certain loyalty to the far-away Empress whose power shelters and supports while it restrains them. Their security, however, from the first developed an evil which was not clearly foreseen. Formerly they had much to hope for if they governed well, and became popular, for they might acquire fame—very dear to Indians—increased territories, and lives of a certain lofty excitement like those of Euro- pean Princes in the Middle Ages. Moreover they had much to dread, for the submissiveness of Indians lasts only to a point beyond which they rise in insurrection as readily as Parisians, and almost invariably shed blood. Under the shadow of the British Monarchy, on the other hand, the Princes found that whatever they did or left an done their bositions were immutably fixed, and while the door of adventure was closed, and ambition forbidden, insurrection against them was practically impossible. They tended therefore to become rais faineants. They picked out or imported from other States clever men of business—always natives—resigned all power into their hands, and buried themselves in sport, in the enjoyments of the table, or in the harem.

The Government of India, well aware of these evils, endeavoured to correct them by a system of education borrowed from Europe. The Princes were carefully taught by European tutors, or sent to the Indian Eton, a school for Princes in Rajpootana, or even in a few cases despatched to England. The result in a few instances was improvement, but almost immediately a new class of evils developed themselves. The Princes became mentally separated too far from their subjects, and their relatives; they found, as one of them said, "nobody to speak to in their States " ; ceased to care about their people, "mere animals," as one of them described them ; and became furiously restless. Unlike the Princes of Europe, who generally remain within their own dominions, they began to travel incessantly, and found a novel excitement in visiting Europe, where they were unwisely worshipped and flattered at several Courts, and at last neglected their States as completely as the faineants, with this aggravation, that they spent enormous sums abroad. The object of their flatterers is money ; they know no more of finance than Victor Emanuel IL, who, with all his capacity for ruling, could not understand a sum ; they give unheard-of prices for rare furniture ; and, in short, they scatter resources which ultimately can come only from their people. The evil is greatly aggravated by the fact that at home people think these visits must be dictated by "en- lightened curiosity," and pay to the Princes honour not only as great personages—which they are, though it was a blunder to class them among Royalties—but as philo- sophic gentlemen intent on self-improvement. Lord Curzon, who has visited during the Famine the terri- tories of some of these travellers, has perceived with his own eyes the magnitude of the evil, and has struck at it with characteristic energy. In a circular to the different Presidencies he has pointed out that the plea of self-improvement is seldom well-founded, that the result of European tours "is more often the collection of expensive furniture in the palace, and of questionable proclivities in the mind of the returned traveller, than in the increase of his capacity for public or political service," and that even if the Prince spent his own money the line of division between his own fortune and the Treasury of the State was often very "thin." For the future therefore, the Viceroy has prohibited such tours without the permission of the Government of India, which will consider repeated absence "as a dere- liction and not as a discharge of public duty." The Princes, in fact, are to do the work for which they are lavishly paid, instead of gadding about.

We have no doubt that this drastic order is wise, for we do not believe that the effect of Europe upon the Oriental mind is always beneficial. It is very often much more like the effect which our fathers said residence in Italy had upon Englishmen,—a complete uprooting of all home-grown ideas of duty, and a complete failure to gain other ideas in their place. Even Dhuleep Singh did not become an Englishman, while the worst and most treacherous enemy the British ever had was the adviser of Nana Sahib, who had been for years a flattered favourite in London. Nevertheless, we can feel some pity for these Princes, who have been educated and "enlightened" until the humdrum work of governing ignorant and super- stitious subjects suffocates them with ennui, and who cannot relieve themselves either by travel, or by adventure, or by battle. They are not, for the most part, highly born—the Maharajah of Travancore and some of the Rajpoot Princes are exceptions—but they have usually the blood of brave soldiers or wily statesmen ia their veins, and they fret under the absence of careers such as their fathers enjoyed. The philanthropy enjoined upon them by the Indian Government seems to most of them a mere fad—" The Famine ?" said one of them the other day, "what have I to do with the Famine ? That is God's work "—they long for excitement, and but that it is so hopeless would risk all in a rebellion rather than. lead lives so tame. The interestingness of life, in fact, is. gone from them, and now the only distraction they found. sufficient is suddenly taken away. They will feel like soldiers condemned without any vocation to do rectors' work. It is much better that they should. do it—for their parishioners count by the million and their parishes are States—but we can understand that to many of them, to the Mahratta Princes, for instance, all grandsons or great- grandsons of reivers who cut their way to thrones, their lot must seem a dull one, and even a tropical storm more endurable than such a tropical calm. They will not abdicate, however. Even constitutional Kings do not do that.