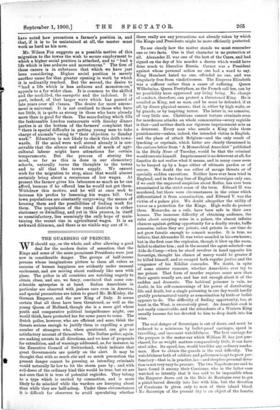 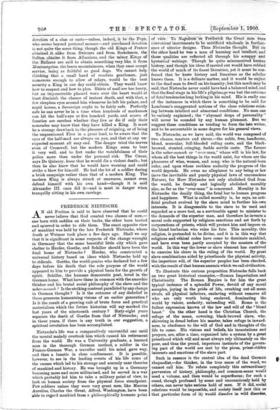 THE GUARDING OF PRINCES.

WE should say, on the whole, and after allowing a good deal for the modern desire of sensation, that the Kings and some of the more prominent Presidents were just now in considerable danger. The groups of half-insane persons whose imaginations picture to them all rulers as enemies of human happiness are evidently under unusual excitement, and are moving about restlessly like men with plans. The police in all countries are watching eagerly to obtain dues, and are, we fancy, convinced that some con- siderable enterprise is at hand. Italian Anarchists in particular are observed with jealous care even in America, and special precautions are taken to guard Mr. McKinley, the German Emperor, and the new King of Italy. It seems certain that all three have been threatened, as well as the young Queen of Holland, though she is a mere girl whose youth and comparative political insignificance might, one would think, have protected her for some years to come. The Dutch police, however, who are efficient and sane, think the threats serious enough to justify them in expelling a great number of strangers who, when questioned, can give no satisfactory account of themselves. The Italian police, again, are making arrests in all directions, and we hear of proposals for extradition, and of warnings addressed, as, for instance, to the Executive Council of Switzerland, which indicate that great Governments are quietly on the alert. It may be thought that with so much stir and so much precaution the present danger cannot be pressing, as intending criminals would naturally lie low to let the storm pass by ; and with evil-doers of the ordinary kind this would be true, but we are not sure that it is true of potential regicides. They belong to a type which is excited by commotion, and is more likely to do mischief while the warders are hurrying about than while they are half-asleep. Under these circumstances it is difficult for observers to avoid speculating whether there really are any precautions not already taken by which the Kings and Presidents might be more efficiently protected.

To see clearly how the matter stands we must remember one or two facts. One is that character is no protection at all. Alexander IL was one of the best of the Czars, and had signed on the day of his murder a decree which would have done much to liberalise Russia. Carnot was a President against whose personal action no one had a word to say. King Humbert hated no one, offended no one, and was singularly free from vindictiveness. The Empress Elizabeth was a sufferer rather than a cause of suffering. Queen Willielmina, Queen Prettyface, as the French call her, can by no possibility have oppressed any living being. No change of conduct, therefore, can protect a threatened King. He is assailed as King, not as man, and he must be defended, if at all, by direct physical means; that is, either by high walls, or by guards, or by inspiring terror. The latter is, we conceive, of very little use. Christians cannot torture criminals even for murderous attacks on whole communities—every regicide is that—and neither death nor rigorous imprisonment acts as a deterrent. Every man who assails a King risks those punishments—unless, indeed, the intended victim is English, and the place of attack Belgium—and the only result of lynching or reprisals, which latter are clearly threatened in the curious letter from "A Monarchical Anarchist" published in the Daily News of Tuesday, would be that the criminal would execute himself. Imprisonment is no deterrent at all, for fanatics do not realise what it means, and in many cases seem to be buoyed up by a hope either of ultimate pardon or of rescue. We doubt the use either of savage threats or of specially sudden executions. Neither have ever been tried in England, and in the long line of English Sovereigns only one, if we omit the unproved suspicion about Rufus, has ever been assassinated in the strict sense of the term. Edward II. was murdered, but there were circumstances in the crime which differentiated it from assassination, and Edward V. was the victim of a palace plot. We doubt altogether the utility of terror as a protection for the Kings. High walls do protect them. Monarchs, as a rule, have been safe in their own houses. The immense difficulty of obtaining audience, the rules about carrying arms in a palace, the almost infinite chances against getting opportunity for a deadly stroke, baffle assassins, unless they are priests, and priests in our time do not grow fanatic enough to commit murder. It is true, we believe, that Alexander II. was twice assailed in his own house; but in the first case the explosion, though it blew up the room, failed to shatter him ; and in the second the agent selected—an Aide-de-Camp—when he stood revolver in hand opposite his Sovereign, thought his chance of mercy would be greater if he killed himself, and so escaped both regular justice and the vengeance of his Nihilist comrades. We doubt, in spite of some sinister rumours, whether Anarchists ever try to use poison. That form of murder requires saner men than their agents usually are, and has not enough about it of the sudden and dramatic. The habitual poisoner is vain, no doubt, in his self-communings of his power of distributing life and death, but a single poisoning in our day would hardly gratify preternatural vanity as assassination by knife or bullet appears to do. The difficulty of finding opportunity, too, at least in the West, is excessively great. An Anarchist cook is not easily conceivable, and the attendants of a Western King usually become far too devoted to him to drop death into his wine.

The real danger of Sovereigns is out of doors, and must be reduced to a minimum by bullet-proof carriages, speed in travelling, and incessant watchfulness. The hest carriage for the purpose is the motor-car which William II. has just pur- chased, for as weight matters comparatively little, it can have steel sides. Its speed, too, would bewilder any ordinary marks- man. How to obtain the guards is the real difficulty. The watchfulness both of soldiers and policemen is apt to grow per- functory—that is, in practice, lax—and sleepless personal devo- tion is not very easy to procure. The two Napoleons are said to have found it among their Corsicans, who in the latter case watched so intently that it was said to be impossible when the Emperor drove out in the Bois de Boulogne ever to get a pistol-barrel directly into line with him, but the devotion of Coraicans Is given only to men of their island blood. No Sovereign of the present day is an object of the fanatic

devotion of a clan or caste—unless, indeed, it be the Pope, who seems beyond personal menace—and purchased devotion is not quite the same thing, though the old Kings of France obtained it alike from Switzers and from Scotchmen, the Sultan. ehtains it from Albanians, and the minor. Kings of the 13_alkans are said to obtain something very, like, it from Montenegrins, the brave mountaineers, when they once accept service, being as faithful as good dogs. We cannot help thinking that a small band of resolute gentlemen, just numerous enough to allow of relays, would be the best security a King in our day could obtain. They would know how to suspect and how to plan. Shirts of mail are too heavy, but an impenetrable placard worn over the heart would at least diminish the chance of instant death, and with that, a few sleepless eyes around him whenever he left his palace, and rapid horses, a Sovereign ought to be fairly safe. Perfectly safe he can never be in a time when hundreds of marksmen can hit the bull's-eye at five hundred yards, and scores of fanatics are careless whether they live or die if only their comrades may know that they have killed a King. It must be a strange drawback to the pleasure of reigning, or of being the unquestioned First in a great land, to be aware that the eyes of the half-mad are always on you, and that at any us- expected moment all may end. The danger tried the nerves even of Cromwell, but the modern Kings seem to bear it very well, and to fret under the watchfulness of their police more than under the personal risk. The Cmsar, says De Quincey, knew that he would die a violent death ; but then he also knew that he would have warning and could strike a blow for himself. He had the lot of a soldier during a brisk campaign rather than that of a modern King. The modern King is always struck at unawares, cannot even defend himself with his own hand—though it is said Alexander III. once did it—and is most in danger when tranquilly sitting in his own carriage.