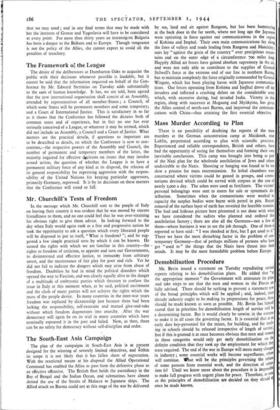 Mass Murder According to Plan

There is no possibility of doubting the reports of the mass murders at the German concentration camp at Maidanek, near Lublin, perpetrated according to plan with scientific precision. Experienced and reliable correspondents, British and others, have had the opportunity of seeing for themselves and forming their own inevitable conclusions. This camp was brought into being as part of the Nazi plan for the wholesale annihilation of Jews and others undesirable to the Nazis. Shooting or hanging was found to be too slow a process for mass extermination. So lethal chambers were constructed where victims could be gassed in groups, and crema- toriums devised which could be served with corpses at the rate of nearly 2,000 a day. The ashes were used as fertilizers. The victims' personal belongings were sent to stores for sale or systematic dis- tribution. Sometimes when the crematoriums were worked to capacity the surplus bodies were burnt with petrol in pits. Recent removal of the surface layer of earth has revealed the horrible remains. The foul and hideous picture here presented is not done with when we have considered the sadists who planned and ordered this annihilation factory ; there are also all the Germans—not a few of them—whose business it was to see the job through. One of them is reported to have said: " I was shocked at first, but I got used to it." There we have the most disturbing factor in the problem of con- temporary Germany—that of perhaps millions of persons who have got " used to " the things that the Nazis have thrust into their minds. It may be the most formidable problem before Europe.