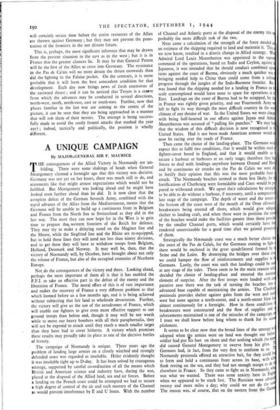 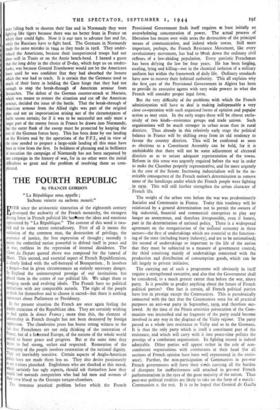 THE consequences of the Allied Victory in Normandy are un- folding. There were some shakings of heads when General Montgomery claimed a fortnight ago that this victory was decisive. Germany was not yet on her knees, there was much still to do, and statements like that might arouse expectations which would not be fulfilled. But Montgomery was looking ahead and he might have looked even further ahead than he did. It is now clear that the complete defeat of the German Seventh Army, combined with the rapid advance of the Allies from the Mediterranean, means that the Germans will be unable to build up a continuous front in Belgium and France from the North Sea to Switzerland as they did in the last war. The most they can now hope for in the West is to gain time to prepare thee, western frontiers of the Reich for defence. They may try to make a delaying stand on the Maginot line and the Meuse, while the Siegfried line and the Rhine are re-equipped, but to hold these lines they will need not less than ninety divisions, and to get these they will have to withdraw troops from Belgium, Holland, Denmark and Norway. It may well be, then, that the victory of Normandy will, by October, have brought about not only the release of France, but also of the occupied countries of Northern Europe.

Nor do the consequences of the victory end there. Looking ahead, perhaps the most important of them all is that it has enabled the F.F.I. to take an effective part in the defeat of the enemy and the liberation of France. The moral effect of this is of vast importance and makes the recovery of France a very different problem to that which loomed before us a few months ago, and it is being achieved without subjecting that fair land to wholesale devastation. Further, the victory will give us the use of the aerodromes of France, which will enable our fighters to give even more effective support to our ground troops than before and, though it may well be not worth while to move our heavy bombers with all their paraphernalia, they will not be exposed to attack until they reach a much smaller target than they have had to cover hitherto. A victory which promises these results may proudly take its place as one of the decisive battles of history.

The campaign of Normandy is unique. Three years ago the problem of landing large armies on a closely watched and strongly defended coast was regarded as insoluble. Hitler evidently thought it was insoluble right up to D-day. It has been solved by courageous strategy, supported by careful co-ordination of all the means which British and American science and industry have, during the war, placed at the disposal of the Allied land, sea and air forces. Before a landing on the French coast could be attempted we had to secure a high degree of control of the air and such mastery of the Channel as would prevent interference by E and U boats. With the number of Channel and Atlantic ports at the disposal of the enemy this probably the more difficult task of the two.

Next came a calculation of the strength of the force needed an estimate of the shipping required to land and maintain it. This we now know, resulted in a drastic change in Allied strategy. WI Admiral Lord Louis Mountbatten was appointed to the sups command of the operations, based on India and Ceylon, against Japanese, it was intended that he should conduct combined ope tions against the coast of Burma, obviously a much quicker way bringing needed help to China than could come from a toilso progress through the jungles of the Indo-Burmese frontier. But was found that the shipping needed for a landing in France on scale contemplated would leave none to spare for operations in t, East. Landings on the coast of Burma had to be scrapped, for in France was rightly given priority, and our Fourteenth Army a left to fight its way through the most difficult country in the wo climate of any theatre of war. In the United States we were charg with being half-hearted in our efforts against Japan and Admi Mountbatten was accused of " pulling his punches." We may ho that the wisdom of this difficult decision is now recognised in United States. Had it not been made American armour would n now be racing over the roads of France.

Then came the choice of the landing-place. The Germans we expect this to fulfil two conditions, that it would be within reach fighter-cover based in England, and that it would enable us secure a harbour or harbours at an early stage; therefore they ke forces to deal with landings anywhere between Ostend and Ha and by continuous air attacks on the Pas de Calais we were ab to fortify their opinion that this was the most probable front attack. The Normandy beaches seemed to them less likely, for fortifications of Cherbourg were formidable and Caen would be pt pared to withstand attack. We upset their calculations by arrang to be able to do without a harbour, if necessary, until a comparative late stage of the campaign. The depth of water and the nature the bottom off the coast west of the mouth of the Orne allowed breakwaters being erected off shore, which would give adequa shelter to landing craft, and when these were in position the cote of the beaches would make the facilities greater than those provid by the smaller Channel ports, which would certainly have I rendered unserviceable for a good time after we gained possess of them.

Strategically the Normandy coast was a much better choice th the coast of the Pas de Calais, for the Germans coming to fight there would be enclosed in the great quadrilateral formed by Seine and the Loire. By destroying the bridges over these fll we could hamper the flow of reinforcements and supplies to Germans. Lastly, the coast was such that landings could be ma at any stage of the tides. These seem to be the main reasons w-,: decided the choice of landing-place and ensured the necess element of surprise. After the first troops were landed with co parative ease there was the task of turning the beaches into advanced base capable of maintaining the armies. The Cherbe peninsula provides shelter against gales from the west and sou west but none against a north-easter, and a north-easter blew h almost continuously for a fortnight. How in these conditions breakwaters were constructed and the flow of supplies and inforcements maintained is one of the miracles of the campaign, I trust we shall know before long whom to thank for its arc plishment.

It seems to be clear now that the broad lines of the strategy to adopted when tbe armies were on land was thought out before soldier had put fiis foot on shore and that nothing which the en did caused General Montgomery to swerve from his plan. Germans had, in fact, from the very first to conform to us. Normandy peninsula offered an attractive bait, for they could to form and hold a continuous front across its base, with el flank resting on the sea, and they had not enough troops to do elsewhere in France. So they came to fight us in Normandy, was what we wanted. There was some anxiety here in Engl when we appeared to be stuck fast. The Russians were ady twenty and more miles a day; why could we not do the The reason' was, of course, that on the eastern front the G were falling back to shorten their line and in Normandy they were fighting like tigers because there was no better front in France on which they could fight. Now it is our turn to advance fast and far, while the Russians have to fight hard. The Germans in Normandy made the same mistake in 1944 as they made in 1918. They under- valued the Americans, because their inexperienced troops had not done well in Tunis or on the Anzio beach-head. I hazard a guess that the long delay in the choice of D-day, which kept us on tender- hooks, was because General Eisenhower would not let the Americans loose until he was confident That they had absorbed the lessons which the war had to teach. It is certain that the Germans used so much of their force in holding the Caen hinge that they had not enough to stop the break-through of American armour from Avranches. The defeat of the German counter-attack at Mortain, which was meant to restore the situation and cut off the American armour, decided the issue of• the battle. That the break-through of American armour from the Allied right was part of the original plan and not an improvisation arising out of the circumstances of battle seems certain; for if it was to be successful not only must a larger part of the enemy forces in France be drawn into Normandy, but the outer flank of the sweep must be protected by keeping the rest of the German forces busy. This has been done by our landing on the Riviera and by the operations of the F.F.I., and in view of the time needed to prepare a large-scale landing all this must have been in view from the first. In boldness of planning and in brilliance of execution the campaign of Normandy has not been surpassed by any campaign in the history of war, for in no other were the initial difficulties so great and the problem of resolving them so com- plicated.