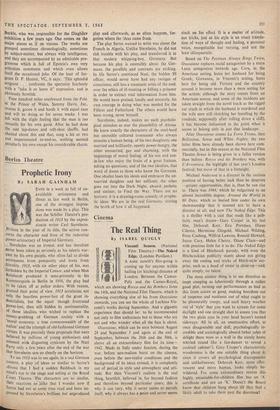 Visconti Season. (National Film Theatre.)—The Naked Edge. (London Pavilion.) A RARE month's film-going is coming up for anyone within hailing (or hitching) distance of London. Between the Cameo- Poly and the Cameo-Royal, which are showing Rocco and his Brothers from the 14th, and the National Film Theatre, which is showing everything else of his from Ossessione onwards, you can see the whole of Luchino Vis- conti's works during September. And a gigantic experience that should be: to be recommended not only to film enthusiasts but to those who are not and who wonder what all the fuss is about.

Ossessione, which can be seen between August 29 and September 3 and again at the end of September, between the 26th and the 30th, is above all an extraordinary film for its time- 1942. Made in Italy under fascism, during the war, before neo-realism burst on the cinema, even before the neo-realist conditions and the background of its ideas existed, it is completely out of period in style and atmosphere and atti- tude. But then Visconti's realism is the real thing, heartfelt, believed in, far beyond fashion and therefore beyond particular years; this is why it can vary, why it never seems to parody itself, why it always has a point and never seems stuck on for effect. It is a matter of attitude, not tricks, just as his style is an exact transla- tion of ways of thought and feeling, a personal voice, recognisable but varying, and not the least idiosyncratic.

Based on The Postman Always Rings Twice, Ossessione replaces racial antagonism by a more Latin antagonism towards age. Cora, in the American setting, bates her husband for being Greek; Giovanna, in Visconti's setting, hates hers for being old. Ferrara and the country around it become more than a mere setting for the action; although the story comes from an American source, and some of the incidents are taken straight from the novel (such as the rigged car crash in which the husband is murdered and the wife seen still clutching her handbag by the roadside, supposedly after rolling down a cliff), it has become italianised to the point when it seems to belong only in just that landscape.

After Ossessione comes La Terra Trema, then Bellissima, Senso and White Nights; the two latter films have already been shown here com- mercially, but in this season at the National Film Theatre Senso is being given in a fuller version than before. Rocco and his Brothers was, with L'Avventura, the highlight of last year's London festival; but more of that in a fortnight.

Michael Anderson is a director in the curious position of having better luck than he deserves —greater opportunities, that is, than he can rise to. There was 1984, which he vulgarised to an almost incredible degree; Around the World in 80 Days, which so buried him under its own showmanship that it seemed not to have a director at all; and now The Naked Edge. This is a thriller with a cast that reads like a pub- licity man's dream—Gary Cooper in his last film, Deborah Kerr, Eric Portman, Diane Cilento, Hermione Gingold, Michael Wilding, Peter Cushing, Wilfrid Lawson, Ronald Howard, Joyce Cary, Helen Cherry, Diane Clare—and with precious little for it to do. The Naked Edge is a kind of Hitchcock parody, with even the Hitchcockian publicity stunts about not giving away the ending and tricks of Hitch-style sur- prise, such as a bead of sweat in close-up—and, quite simply, no talent.

The most sinister thing is to see direction as inept creeping as laboriously through a rather good plot, turning out performances as bad as this from actors as good, making boredom out of suspense and nastiness out of what ought to be pleasurably creepy, and such heavy weather out of `style' that you want to scream for some daylight and one straight shot to assure you that the two plain eyes in your head haven't turned sideways. All in all, an unattractive effort, at once disagreeable aIJd dull, psychologically in- credible and sociologically absurd (what yelps of delight there were as a wall in the stately home whirled round like 'a fan-dancer to reveal a cocktail cabinet!). Gary Cooper's characteristic woodenness is the one suitable thing about it, since it covers all psychological discrepancies and unlikelinesses; Deborah Kerr, more effer- vescent and more human, looks simply be- wildered. For some extraordinary reason this highly unsuitable-for-children film has an 'A' certificate and not an 'X.' Doesn't the Board know that children hang about till they find a likely adult to take them past the doorman?