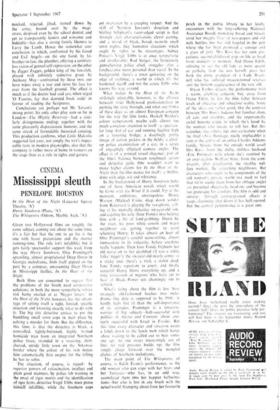 Hurry Sundown (Plaza, 'A') The Whisperers (Odeon, Marble Arch, 'AS) Given two Hollywood films on roughly the same subject, coming out about the same time, it's a fair bet that the one to go for is the one with lesser pretensions and the shorter running-time. The rule isn't infallible; but it gets fairly spectacular support this week from the way Hurry Sundown, Otto Preminger's sprawling, almost proprietorial Deep Down in Georgia melodrama, finds itself pipped on the post by a compact, unassuming Deep Down in Mississippi thriller, In the Heat of the Night.

Both films are concerned to suggest that the problems of the South need cooperative solutions; in both the more sympathetic whites risk being snarled at as `Nigger lovers.' In the Heat of the Night, however, has the advan- tage of setting itself a tight, limited, specific situation and knowing exactly what to do with it. The big city detective arrives to put the bumbling small town cops in their place by solving a Murder for them. But the difference, this time, is that the detective is black, a controlled, tightly-buttoned, highly trained homicide man from an integrated Northern police force, stranded in a sweating, shirt- sleeved, untidy little town on the Arkansas border where the colour of his skin makes him automatically first suspect for the killing he has to solve.

The situation, of course, is rigged : by superior powers of ratiocination, intellect and plain good manners, by police lab training in the onset of rigor mortis and the identification of rite ferns, detective Virgil Tibbs must prove himself infallible, while the Southern cops

are o‘ ertaken by a creeping respect. And the skill of Norman Jewison's direction and Stirling Silliphant's razor-edged script is that through alert characterisation, clever casting, and a mood of bleak, bored, neon-lit small town nights, they humanise situations which ought by rights to be stereotypes. Sidney Poitier's Virgil Tibbs is at once sympathetic and insufferable: Rod Steiger, the ferociously gum-chewing police chief, struggles after a forebearance more personal than racial. In the background, there's a town quivering on the edge of violence; a world in which it the hardened sheriff and not the astute Tibbs who knows his way around.

What makes In the Heat of the Night strikingly enjoyable, however, is the alliance between strict Hollywood professionalism in pushing the story through, and what one thinks of these days as an almost European concern for the way the film looks. Haskell Wexler's colour camerawork maybe calls almost too much conscious attention to itself—a spectacu- lar long shot of car and running fugitive high on a towering bridge; a dazzlingly pretty image of cotton pickers in the fields; a close- up police examination of a car, in a series of engagingly elliptical camera angles. The effect is of a pointed visual elegance: part of the film's balance between roughneck action and detective guile. One wouldn't want to make higher claims for In the Heat of flu Night than the film makes for itself: a thriller, done with edge, wit and relevance.

In the background of Hurry Sundown lurks one of those American novels which would be Gone with the Wind if it could. Up at the mansion, ambitious, unscrupulous Henry Warren (Michael Caine, deep down yonder from Battersea) is playing the saxaphone, yell- ing at his mentally defective six-year-old son, and cajoling his wife (Jane Fonda) into helping him with a bit of land-grabbing. Down by the river, his poor white cousin and negro neighbour are getting together to resist scheming Henry. It takes almost an hour of Otto Preminger's careful scene-setting. almost immaculate in its vulgarity, before anything really happens. Then Jane Fonda frightens her old nurse on to her deathbed ('I was a white folks' nigger'); the six-year-old nearly comes 10 a sticky end; there's a trial, a stolen deed, Jane Fonda repentant in court; and finally vengeful Henry blows everything up. and a long procession of negroes who have yet to hear of Black Power sets chantingly out to rebuild.

What's tiring about the film is less these strangely old-fashioned lurches into melo- drama (the date is supposed to be 19-16: it hardly feels like it) than the self-importance of its attitudes. Preminger is a tenacious worrier of big subjects—half-successful with politics in Advise and Consent; about one- tenth successful with Israel in Exodus. But this time every character and situation wears a label, down to the lynch mob which hangs about waiting to be called out to beat some- one up: no one strays interestingly out of line: no real pressure builds up; the film simply chugs forward over the mangled clicMs of Southern melodrama.

The main point of The Whisperers. of course. is Edith Evans's performance. as the old woman who can cope with her fears and her fantasies—who has, in an odd way, assimilated them into her happier hallucina- tions—but who is lost in any brush with the actual world. Stumping about from her favourite perch in the public library to her lordly encounters with the long-suffering National Assistance Board. munching bread and treacle amid her magpie litter of newspapers and old milk bottles, lost but still hopeful in the pub where she has been promised a sausage and a glass of port. Mrs Ross has her own pre- carious. second-childhood grip on life as lived from moment to moment. And Dame Edith, refusing to see the old lady as more quaint or pathetic than she sees herself, gives her both the dotty grandeur of a Lady Brack- nell who has suffered unaccustomed reverses and the forlorn acquiescence of the very old.

Bryan Forbes directs the performance with a warm, attenti%e concern; but, away from Dame Edith, he lets the film falter between levels of objecti‘e and subjective reality. Some of the ideas are rather good, like the contrast between Mrs Ross's hideous but familiar slum, all cats and dustbins, and the impersonally awful housing estate to which she's lured by the woman who means to rob her. But this sequence. like others, tips into caricature when the thief (Avis Bunnage, nicely implacable) is seen at the cen:re of an entire Charles Addams family. Shocks from the outside world assail Mrs Ross--from the shifty, shiftless husband (Eric Portman) with whom she's reunited by an over-zealous Welfare Stale; from the com- placent. idiot psychiatrist, the stealthy wel- fare worker, the screeching neighbours. But characters who ought to be components of the old woman-s priNate world (we need to feel that we're seeing them from her oblique angle) arc presented objectively. head-on; and become too grotesque for comfort. The film is odd and uneasy : through coarse-grained effects it keeps slamming shut doors it has half-opened. But the central performance is a great one.