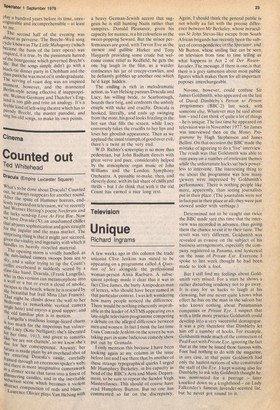 Dracula (Empire Leicester Square) What's to be done about Dracula? Counted out, he always reappears for another round.. After the spate of Hammer horrors, endlessly repeated on television, we've recently had Werner Herzog's poetic Nosferatu and the larky send-up Love At First Bite. Now we have Dracula (X), an unashamed chiller that abjures sophistication and goes straight for the jugular and the mass market. The surprising thing is that it might just succeed, i given the vitality and ingenuity with which t handles its heavily recycled material. The opening storm is vividly handled, as the rain-lashed camera swoops from sea to sky, and a sailor trying to tip the Count's coffin overboard is suddenly seized by a clavv-like hand. Dracula, (Frank Langel)a), who in this version can metamorphose into a Wolf or a bat or even a cloud of smoke, escapes to the beach, where he is rescued by the beautiful but frail Mina (Jan Francis). That night he climbs down the wall to her bedroom (a remarkable vertical camera angle here) and enjoys a good supper; and the old familiar plot is in motion. Langella's insidious lounge-lizard charm is too much for the imperious but vulnerable Lucy (Kate Nelligan); she's liberated tor her time, 1913, and given to remarks like 'we are not chattels', so we know she s due for her comeuppance. Anyway, her future is made plain by an overhead shot of her entering Dracula's castle, carefully framed through an enormous spider's web; nd there is more imaginative camerawork in .a dinner scene that turns into a forest of limmering candles, and in the inevitable seduction scene which becomes a violent abstract composition of reds and blues. Laurence Olivier plays Van Helsing with a heavy German-Jewish accent that suggests he is still hunting Nazis rather than vampires. Donald Pleasance, given his capacity for nuance, is a bit colourless as the sweet-popping Seward. But the minor performances are good, with Trevor Eve as the earnest and gullible Harker and Tony Haygarth providing some crude but welcome comic relief as Redfield; he gets the one big laugh in the film, as a warder confiscates his jar of creepy-crawlies, and he defiantly gobbles up another one which he'd kept hidden.

The ending is rich in melodramatic action, as Van Helsing pursues Dracula and Lucy, his willing bride, to Scarborough, boards their brig, and confronts the unholy couple with stake and crucifix. Dracula is hooked, literally, and ends up swinging from the mast, his good looks frizzling in the hot sun that fills the screen, while Lucy conversely takes the crucifix to her lips and loses her ghoulish appearance. Then as we applaud the usual triumph of good over evil, there's a twist at the very end.

W.D. Richter's screenplay is no more than pedestrian, but John Badham directs with great verve and pace, considerably helped by the atmospheric organ music of John Williams and the London Symphony Orchestra. A passable re-make, then, and cleverly done, with its fair share of chills and thrills — but I do think that with it the old Count has earned a nice long rest.