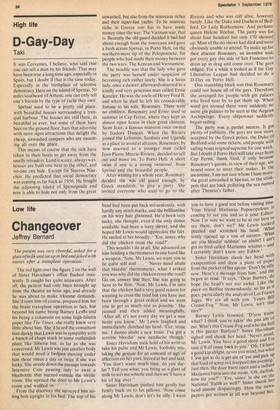 • The patient was very cheer/id, asked for a glass ofmilk and sat up in bed and joked with nurses after a transplant operation.'

The red light over the figure 2 on the wall of Sister Havisham's office flashed insistently. It caught her quite unawares. After all, the patient had only been brought up from the theatre an hour ago, and already he was about to make irksome demands. She'd seen him of course, prepared him for the brain transplant operation in fact, but beyond his name being Barney Les and his being a columnist on some high-falutin paper like The Times, she really knew very little about him. She'd heard the consultant hint darkly that Lewis was in sympathy with a hunch of chaps stuck in some outlandish place like Siberia but, as far as she was concerned, Mr Lewis was just another body that would need a bedpan shoving under him three times a day or twice if she was lucky. She strode down the passage towards Intensive Care pausing only to swat a bluebottle that buzzed outside the sterile room. She opened the door to Mr Lewis's room and walked in.

From the doorway she surveyed him sitting bolt upright in his bed. The top of his head had been put back miraculously, with hardly any stitch marks, and the brilliantine on his wiry hair glistened. He'd been very lucky, she thought, even if the only donor available had been a lorry dirver, and she hoped Mr Lewis would appreciate the fact. He smiled at her broadly. "Ere, sister, why did the chicken cross the road?'

This wouldn't do at all. She advanced on him holding a thermometer in one hand like a weapon. 'Now, Mr Lewis, we want you to

lie quite still and . "Never mind abaht that bleedin' thermometer, what I arsked you was why did the chicken cross the road? Go on, answer that then: She was going to have to be firm. 'Now, Mr Lewis, I'm sure that the chicken had a very good reason for wanting to cross the road but you have just been through a great ordeal and we want you to get as much rest as possible.' She paused and then added meaningfully, 'After all, it's not every day we get a new brain you know.' Mr Lewis laughed and immediately clutched his head. 'Cor, stone me, 1 dunno abaht a new brain. I've got a terrible bleedin' new headache though.'

Sister Havisham took hold of his wrist to take his pulse and Mr Lewis, foolishly mistaking the gesture for an unheard of sign of affection on her part, leered at her and said, 'You don't waste much time, do you darlin'? Tell you what, you bring us a glass of milk to wet me whistle and then we'll have a bit of leg over.'

Sister Havisham pushed him gently hut firmly back on to his pillows. 'Now come along Mr Lewis, don't let's be silly. I want

you to have a good rest before visiting time. Your friend Marianna Popocopolous is coming to see you and so is your Editor. Now I'm sure we want to be at our best to see them, don't we?' Mr Lewis looked puzzled and scratched his head. 'What tently opened up a row of sutures: 'What are you bleedin' rabbitin' on abaht? I ain't got no bird called Marianna whatsit — and I certainly don't know any Editor.' Sister Havisham shook her head with exasperation and drew a piece of paper from the pocket of her apron. 'Don't be sillY now. Here's a message from him,' and she began to read. `It says, "Dear Barney, do hope the. head's not too awful. Like the piece on Berlioz tremendously, so far as it goes, particularly the analysis of Les Francs Juges. We are all with you. Yours Bill Crease-Fog." Now, Mr Lewis, isn't that nice?' Barney Lewis frowned. 'D'you know what? I think you're takin' the piss aht of me. Who's this Crease-Fog and who the hell is this geezer Burlyoz?' Sister Havisham sighed and shook her head. 'Never mind, Mr Lewis. You have a good sleep and I'm sure it'll all come back to you."Oh, I'll have a good kip alright, never you mind, but what I 'ave got to do is get aht of 'ere and pick up, that load of scrap in Liverpool this evening. Just then, the door burst open and a radiant Marianna burst into the room. `Oh, darlink, how izz you?' "Ere, sister. Is she on the National 'Faith as well?' Sister shook her head almost despairingly. How the newspapers got written at all was beyond her.