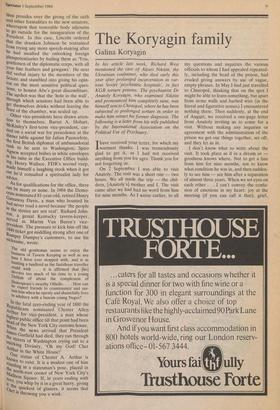 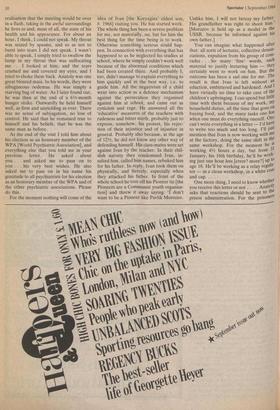 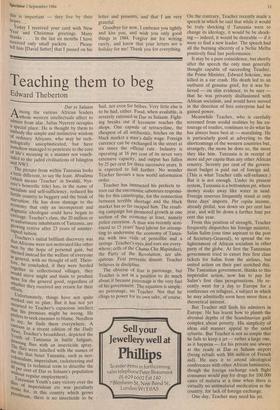 In his article last week, Richard West mentioned the case of Alexei Nikitin, the Ukrainian coalminer, who died early this year after prolonged incarceration in var- ious Soviet 'psychiatric hospitals', in fact KGB torture prisons. The psychiatrist Dr Anatoly Koryagin, who examined Nikitin and pronounced him completely sane, was himself sent to Chistopol, where he has been subjected to prolonged torture in order to make him retract his former diagnosis. The following is a letter from his wife published by the International Association on the Political Use of Psychiatry.

Ihave received your letter, for which my warmest thanks. I was tremendously glad to get it, as I had not received anything from you for ages. Thank you for not forgetting us.

On 2 September I was able to visit Anatoly. The visit was a short one -- two hours. We all made the trip — the chil- dren, [Anatoly's1- mother and I. The visit came after we had had no word from him for nine months. As I wrote earlier, to all my questions and inquiries the various officials to whom I had appealed repeated- ly, including the head of the prison, had evaded giving answers by use of vague, empty phrases. In May I had just travelled to Chistopol, thinking that on the spot I might be able to learn something, but apart from stone walls and barbed wire (in the literal and figurative senses) I encountered nothing there. Then suddenly, at the end of August, we received a one-page letter from Anatoly inviting us to come for a visit. Without making any inquiries or agreement with the administration of the prison we got our things together, set off, and they let us in.

I don't know what to write about the visit. It took place as if in a dream or — goodness knows where. Not to get a line from him for nine months, not to know what condition he was in, and then sudden- ly to see him — see him after a separation of almost three years. When we set eyes on each other . . . I can't convey the confu- sion of emotions in my heart: joy at the meeting (if you can call it that), grief,

realisation that the meeting would be over in a flash, taking in the awful surroundings he lives in and, most of all, the state of his health and his appearance. For about an hour, I think, I could not speak. My throat was seized by spasms, and so as not to burst into tears I did not speak. I wasn't able to speak, I simply tried to swallow the lump in my throat that was suffocating me . . I looked at him, and the tears crushed me and covered my eyes, and I tried to choke them back. Anatoly was one great bloated mass. In his words, they were albugineous oedemas. He was simply a starving bag of water. As I later found out, he was then at the end of a 61/2-month hunger strike. Outwardly he held himself well, as firm and unyielding as ever. There was no sense of subjugation, no loss of control. He said that he remained true to himself and his beliefs, that he was the same man as before.

For the moment nothing will come of the idea of Ivan [the Koryagins' eldest son, b. 1968] visiting you. He has started work. The whole thing has been a severe problem for me, not materially, no, but for him the best thing for the time being is to work. Otherwise something serious could hap- pen. In connection with everything that has happened to us he neglected his studies at school, where he simply couldn't work well because of the abnormal conditions which had been created there. And probably I, too, didn't manage to explain everything to him quickly and in the best way, i.e. to guide him. All the negativism of a child went into action as a defence mechanism against the persecution they organised against him at school, and came out as cynicism and rage. He answered all the 'educative' measures of the teachers with rudeness and bitter mirth, probably just to express, somehow, his protest, his rejec- tion of their injustice and of injustice in general. Probably also because, at the age of 121/2, he did not know any other way of defending himself. His class-mates were set against Ivan by the teacher. In their chil- dish naivety they condemned Ivan, in- sulted him, called him names, rebuked him for his father. In reply, Ivan took them on physically, and fiercely, especially when they attacked his father. In front of the whole school he tore off his Pioneer tie [the Pioneers are a Communist youth organisa- tion] and threw it away saying: 'I don't want to be a Pioneer like Pavlik Morozov.

Unlike him, I will not betray my father.' His grandfather was right to shoot him. [Morozov is held up as a model in the USSR, because he informed against his own father.] You can imagine what happened after that: all sorts of lectures, collective denun- ciations, expulsion from his group of com- rades . . . So many 'fine' words, such material to justify lecturing him — they certainly went to work on him. But the outcome has been a sad one for me. The result is that Ivan is left without an eduction, embittered and hardened. And I have virtually no time to take care of the children's upbringing. I can spend but little time with them because of my work, mY household duties, all the time that goes on buying food, and the many tasks one has when one must do everything oneself. One can't write everything in a letter —I'd have to write too much and too long. I'll just mention that Ivan is now working with me at the factory, doing the same shift in the same workshop. For the moment he Is working 41/2 hours a day, but from 31 January, his 16th birthday, he'll be Work' ing just one hour less [error? more?] up t° age 18. He'll be working as a relay regula" tor — in a clean workshop, in a white coat and cap. . . . One more thing, I need to know whether you receive this letter or not . . . . AnatulY asks that reactions should be sent to the prison administration. For the prisoners

this is important — they live by their hopes....

Today I received your card with New Year and Christmas greetings. Many thanks . . . . In the last six months I have received only small packets . . . . Please tell him [David Satter] that I passed on his letter and presents, and that I am very grateful.

Goodbye for now, I embrace you tightly and kiss you, and wish you only good things in 1984. Forgive me for writing rarely, and know that your letters are a holiday for me! Thank you for everything.