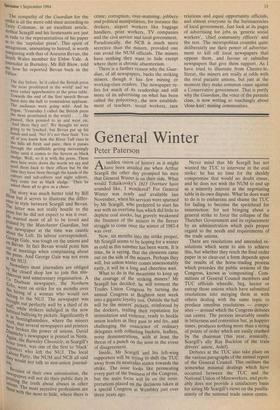 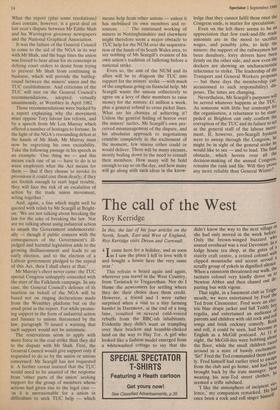 Asudden vision of history as it might have been assailed me when Arthur Scargill the other day promised his men that General Winter is on their side. What would Tchaikovsky's 1813 Overture have sounded like, I wondered? For General Winter was ready and available last November, when his services were spurned by Mr Scargill, who preferred to start his war with an overtime ban which did little to deplete coal stocks, but gravely weakened the finances of the miners in the fiercer struggle to come once the winter of 1983-4 was over.

Now, six months into the strike proper, Mr Scargill seems to be hoping for a winter as cold as this summer has been warm. It is time, he is saying, that the elements.came out on the side of the miners. Perhaps they will, but unless winter comes unseasonably early, it will be a long and cheerless wait.

What to do in the meantime to keep up the courage of the striking miners? Mr Scargill has decided: he will torment the Trades Union Congress by turning the annual Congress at Brighton next week into a gigantic loyalty test. Outside the. hall will be the miners' pickets, reinforced by the dockers, trailing their reputation for intimidation and violence, ready to heckle union leaders as they pass to and fro, and challenging the conscience of ordinary delegates with collecting buckets, leaflets, noisy demonstrations, with at least the threat of a punch on the nose in the event of disagreement.

Inside, Mr Scargill and his left-wing supporters will be trying to shift the TUC away from its neutralist stance towards the strike. The issue looks like permeating every part of the business of the Congress, but the main focus will be on the inter- pretations placed on the decisions taken at a special Congress at Wembley just over three years ago. Never mind that Mr Scargill has not wanted the TUC to intervene in the coal strike: he has no time for the shoddy compromise that would no doubt ensue, and he does not wish the NUM to end up as a minority interest at the negotiating table in its own dispute. What he does want to do is to embarrass and shame the TUC for failing to become the spearhead for insurrection: for not bringing about a general strike to force the collapse of the Thatcher Government and its replacement by an administration which pas proper regard to the needs and requirements of the trade unions.

There are resolutions and amended re- solutions which seem to aim to achieve this, but whether they reach the final order paper in so clear-cut a form depends upon the results of the horse-trading process which precedes the public sessions of the Congress, known as `compositing'. Com- mittees of General Council members and TUC officials wheedle, beg, hector or entrap those unions which have submitted resolutions into merging them in with others dealing with the same topic to produce omnibus resolutions — compo- sites — around which the Congress debates can centre. The process invariably results in bitterness and contention but, in happier times, produces nothing more than a string of points of order which are easily crushed by the chairman (this year, ironically, Scargill's ally Ray Buckton of the train drivers' union, Aslef).

Debates at the TUC also take place on the various paragraphs of the annual report of the General Council. This outlines the somewhat minimal dealings which have occurred between the TUC and the National Union of Mineworkers, and prob- ably does not provide a satisfactory basis for airing Mr Scargill's views on the pusilla- nimity of the national trade union centre. What the report (plus some resolutions) does contain, however, is a great deal on last year's dispute between Mr Eddie Shah and his Warrington giveaway newspapers and the National Graphical Association.

It was the failure of the General Council to come to the aid of the NGA in its war with Mr Shah, and the huge fines the union was forced to bear alone for its contempt in defying court orders to desist from trying to prevent Mr Shah from continuing in business, which will provide the battleg- round between the miners' union and the TUC establishment. And criticisms of the TUC will rest on the General Council's recommendations, adopted, virtually unanimously, at Wembley in April 1982.

Those recommendations were backed by a report explaining why the movement must oppose Tory labour law reform, and by a speech from Mr Len Murray which offered a number of hostages to fortune. In the light of the NGA's resounding defeat at the hands of Mr Shah, Mr Murray must now be regretting his own excitability.

Take the following passage in his speech as an example: 'One thing we — and this means each one of us — have to do is to warn employers what the Act means for them — that if they choose to invoke its provisions it could cost them dearly; if they are foolish enough to start legal trouble, they will face the risk of an escalation of action by the trade union movement, acting together.'

And, again, a line which might well be quoted with relish by Mr Scargill at Bright- on: 'We are not talking about breaking the law for the sake of breaking the law. Nor are we talking about using industrial action to smash the Government undemocratic- ally — though if public concern with the consequences of the Government's ill- judged and harmful legislation adds to the growing disillusionment and leads to an early election, and to the election of a Labour government pledged to the repeal of this Act, then I shall cheer at that.'

Mr Murray's cheer never came: the TUC special Congress unhappily coincided with the start of the Falklands campaign. In any case, the General Council's defence of its inaction on behalf of the NGA will be based not on ringing declarations made from the Wembley platform but on the small print in the report. For while promis- ing support in the form of industrial action and finance to unions threatened by the law, paragraph 70 issued a warning that such support would not be automatic.

The reservations seem to apply with more force to the coal strike than they did to the dispute with Mr Shah. First, the General Council would give support only if requested to do so by the union or unions concerned: Mr Scargill has not requested it. A further caveat insisted that the MC would need to be assured of the response from 'other parts of the union' seeking support for the group of members whose• actions had given rise to the legal case — 'as it is unreasonable for a union in difficulties to seek TUC help — which means help from other unions — unless it has mobilised its own members and re- sources. . . .' The continued working of miners in Nottinghamshire and elsewhere might therefore seem a major obstacle to TUC help for the NUM over the sequestra- tion of the funds of its South Wales area, to say nothing of Mr Scargill's evasion of his own union's tradition of balloting before a national strike.

Even so, the aim of the NUM and its allies will be to dragoon the TUC into support for the miners' strike — with much of the emphasis going on financial help. Mr Scargill wants the unions collectively to agree on a levy of their members to raise money for the miners: Ll million a week, plus a general refusal to cross picket lines. What are his chances of achieving it? Unless the general feeling of horror over the miners' tactics, Mr Scargill's own per- ceived mismanagement of the dispute, and his absolutist approach to negotiations crumble completely in the excitement of the moment, few unions either could or would deliver. There will be many excuses, mostly boiling down to the need to consult their members. How many will be bold enough to say so on the day, and how many will go along with such ideas in the know- ledge that they cannot fulfil them once the Congress ends, is matter for speculation.

Even on the left there seems to be an appreciation that few rank-and-file trade unionists are in the mood to sacrifice wages, and possibly jobs, to help the miners: the support of the railwaymen has been desultory, lorry drivers have been firmly on the other side, and now even the dockers are showing an uncharacteristic reluctance to strike. The leadership of the Transport and General Workers proposes — but these days the membership (un- accustomed to such responsibility) dis" poses. The times are changing.

Nevertheless, Mr Scargill's purposes will be served whatever happens at the TUC. As someone with little but contempt for the organisation, a reluctance to be stainpeded at Brighton can only confirm the

corruption of the TUC and its failure to act as the general staff of the labour mover ment. If, however, pro-Scargill hysteria were to sweep through the Congress, he might be in sight of the general strike he would like to see — and to lead. The final obstacle, which hovers over all the decision-making of the annual Congress' remains the rank and file. Will they Prnve any more reliable than General Winter?