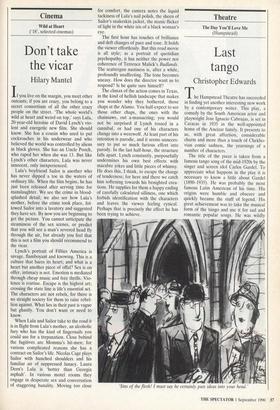 If you live on the margin, you meet other outcasts; if you are crazy, you belong to a secret consortium of all the other crazy people on the street. 'The whole world's wild at heart and weird on top,' says Lula, 20-year-old heroine of David Lynch's vio- lent and energetic new film. She should know. She has a cousin who used to put cockroaches in his underwear and who believed the world was controlled by aliens in black gloves. She has an Uncle Pooch, who raped her when she was 13. But like Lynch's other characters, Lula was never innocent, only inexperienced.

Lula's boyfriend Sailor is another who has never dipped a toe in the waters of ordinary life. When the film begins, he has just been released after serving time for manslaughter. We see the crime in blood- splashed detail; we also see how Lula's mother, before the crime took place, fol- lowed Sailor into a lavatory and suggested they have sex. By now you are beginning to get the picture. You cannot anticipate the steaminess of the sex scenes, or predict that you will see a man's severed head fly through the air, but already you feel that this is not a film you should recommend to the vicar.

Lynch's portrait of Fifties America is savage, flamboyant and knowing. This is a culture that bares its heart; and what is a heart but another piece of offal? Sex is on offer, intimacy is not. Emotion is mediated through cheap music and free thrills. Vio- lence is routine. Escape is the highest art; crossing the state line is life's essential act. The characters are not rebels, for there is no straight society for them to raise rebel- lion against. What lies in their past is vague but ghastly. You don't want or need to know.

When Lula and Sailor take to the road it is in flight from Lula's mother, an alcoholic fury who has the kind of fingernails you could use for a trepanation. Close behind the fugitives are Momma's hit-men; for various complicated reasons she has a contract on Sailor's life. Nicolas Cage plays Sailor with hunched shoulders and his familiar air of suppressed lunacy. Laura Dern's Lula is 'hotter than Georgia asphalt'. In various motel rooms they engage in desperate sex and conversation of staggering banality. Moving too close for comfort, the camera notes the liquid tackiness of Lula's nail polish, the sheen of Sailor's snakeskin jacket, the manic flicker of light in the white iris of a black woman's eye.

The first hour has touches of brilliance and deft changes of pace and tone. It holds the viewer effortlessly. But this road movie is all style; as a portrait of quotidian psychopathy, it has neither the power nor coherence of Terrence Malick's Badlands. The scattergun nastiness is, after a while, profoundly unaffecting. The tone becomes uneasy. How does the director want us to respond? Is he quite sure himself?

The climax of the action comes in Texas, in the kind of hellish landscape that makes you wonder why they bothered, those chaps at the Alamo. You half-expect to see those other chaps, the ones with the chainsaws, out a-massacring; you would not be surprised if Lynch tossed in a cannibal, or had one of his characters change into a werewolf. At least part of his intention is parodic, and it seems unneces- sary to put so much furious effort into parody. In the last half-hour, the structure falls apart. Lynch constantly, purposefully undermines his own best effects with macabre jokes and little pieces of whimsy. He does this, I think, to escape the charge of tenderness; for here and there we catch him softening towards his benighted crea- tions. He supplies for them a happy ending of carefully calculated silliness, one which forbids identification with the characters and leaves the viewer feeling cynical. Perhaps that is precisely the effect he has been trying to achieve.