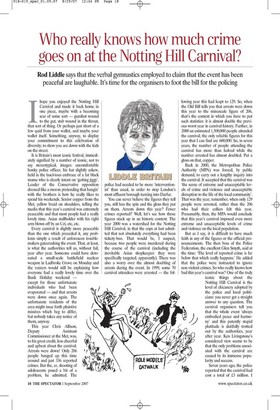 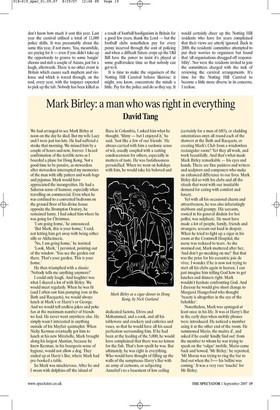 Page 12, 1 September 2007 — Who really knows how much crime goes on at the Notting Hill Carnival?
Close

Who really knows how much crime goes on at the Notting Hill Carnival?

Rod Liddle says that the verbal gymnastics employed to claim that the event has been peaceful are laughable. It's time for the organisers to foot the bill for the policing 1 hope you enjoyed the Notting Hill Carnival and made it back home in one piece, maybe with a becoming scar of some sort — gunshot wound to the gut, stab wound in the throat, that sort of thing. Or perhaps just short of a few quid from your wallet, and maybe your wallet itself. Something, anyway, to display your commitment to this celebration of diversity; to show you are down with the kids on the street.

It is Britain's most iconic festival, immediately signified by a number of iconic, not to say stereotypical, images: uncomfortable honky police officer, his hat slightly askew, held in the lascivious embrace of a fat black mama who is clearly intent on 'getting jiggy'. Leader of the Conservative opposition dressed like a moron pretending that hangin' with the brothers is how he really likes to spend his weekends. Senior copper from the Met, yellow braid on shoulders, telling the media that this year's carnival was extremely peaceable and that most people had a really lovely time. Asian stallholder with his right arm blown off by an Uzi, etc, etc.

Every carnival is slightly more peaceable than the one which preceded it, any problems simply a result of unforeseen troublemakers gatecrashing the event. That, at least, is what the authorities tell us, without fail, year after year. Someone could have detonated a small-scale battlefield nuclear weapon in Ladbroke Grove on Monday and the rozzers would still be explaining how everyone had a really lovely time over the Bank Holiday weekend — except for those unfortunate individuals who had been evaporated — and that arrests were down once again. The unfortunate residents of the area might issue forth plaintive missives which beg to differ, but nobody takes any notice of them, anyway.

This year Chris Allison, Deputy Assistant Commissioner at the Met, was, to his great credit, less cheerful and upbeat about the carnival. Arrests were down! Only 206 people banged up this time around and just 336 reported crimes. But the, er, shooting of adolescents posed a bit of a problem, he admitted. The police had needed to be more 'interventionist' than usual, in order to stop London's most affluent borough turning into Darfur.

You can never believe the figures they tell you, still less the spin and the gloss they put on them. Arrests down this year? Fewer crimes reported? Well, let's see how those figures stack up in an historic context. The year 2000 was a watershed for the Notting Hill Carnival, in that the cops at last admitted that not absolutely everything had been tickety-boo. That would be, I suspect, because two people were murdered during the course of the carnival (including the inevitable Asian shopkeeper: they were specifically targeted, apparently). There was also a worry over the almost doubling of arrests during the event. In 1999, some 70 carnival attendees were arrested — the following year this had leapt to 129. So, when the Old Bill tells you that arrests were down this year to the minuscule figure of 206, that's the context in which you have to put such statistics: it is almost double the previous worst year in carnival history. Further, in 2000 an estimated 1,500,000 people attended the carnival; the only reliable figures for this year that I can find are 600,000. So, in seven years, the number of people attending the carnival has more than halved while the number arrested has almost doubled. Put a gloss on that, copper.

Back in 2000, the Metropolitan Police Authority (MPA) was forced, by public demand, to carry out a lengthy inquiry into the carnival. It accepted that the carnival was `the scene of extreme and unacceptable levels of crime and violence and unacceptable disruption to the life of the local community'. That was the year, remember, when only 129 people were arrested, rather than the 206 who had their collars felt this year. Presumably, then, the MPA would conclude that this year's carnival imposed even more extreme and unacceptable levels of crime and violence on the local population.

But as I say, it is difficult to have much faith in any of the figures or the official pronouncements. The then boss of the Police Federation, the excellent Glen Smyth, said at the time: 'The level of reported crime is far below that which really happens.' He added that the police were instructed to ignore non-violent crimes. So who really knows how bad this year's carnival was? One of the truly iconic things about the Notting Hill Carnival is the level of chicanery adopted by the police and local politicians: you never get a straight answer to any question. The carnival organisers tell you that the whole event 'always embodied peace and harmony' and this patently stupid platitude is dutifully trotted out by the authorities, year after year. Ken Livingstone's considered view seems to be that the only problems associated with the carnival are caused by its immense popularity and success.

Seven years ago, the police reported that the carnival had cost a total of £3 million I don't know how much it cost this year. Last year the carnival utilised a total of 11,000 police shifts. It was presumably about the same this year, if not more. You, meanwhile, are paying for it — even if you didn't take up the opportunity to groove to some bangin' choons and stab a couple of Asians, just for a laugh, afterwards. There is no other event in Britain which causes such mayhem and violence and which is waved through, on the nod, every year, with the taxpayer expected to pick up the tab. Nobody has been killed as a result of football hooliganism in Britain for a good few years, thank the Lord — but the football clubs nonetheless pay for every penny incurred through the cost of policing and when a difficult fixture crops up the Old Bill have the power to insist it's played at some godforsaken time so that nobody can get to it.

It is time to make the organisers of the Notting Hill Carnival behave likewise: it might, you know, concentrate the minds a little. Pay for the police and do as they say. It would certainly cheer up the Notting Hill residents who have for years complained that their views are utterly ignored. Back in 2000, the residents' committee attempted to put their worries to organisers but found that 'all organisations shrugged off responsibility'. Nor were the residents invited to join the committees charged with the task of reviewing the carnival arrangements. It's time for the Notting Hill Carnival to become a little more diverse in its concerns, I reckon.