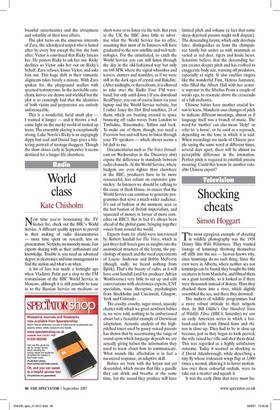 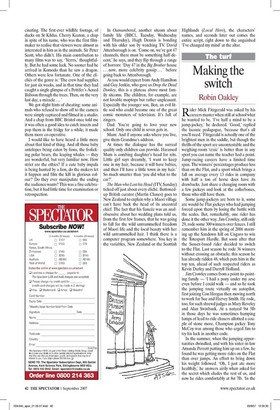 Simon Hoggart rr he most egregious example of cheating in wildlife photography was the 1958 Disney film Wild Wilderness. They wanted footage of lemmings throwing themselves off cliffs into the sea — heaven knows why, since lemmings do no such thing. Since the crew were in Alberta, where neither sea nor lemmings can be found, they bought the little creatures in from Manitoba, and filmed them on a giant turntable, so it looked as if there were thousands instead of dozens. Then they chucked them into a river, which slightly resembled the sea, and there they drowned.

The makers of wildlife programmes had a more robust attitude to their subjects then. In Bill Oddie's One Hundred Years of Wildlife Films (BBC4, Saturday) we saw an early American series in which a husband-and-wife team filmed lions and rhinos in close-up. They had to be in close-up because, just as they began to look peeved, the wife raised her rifle and shot them dead. This was regarded as a highly satisfactory outcome. Today it seemed as shocking as if David Attenborough, while describing a tiny fly whose iridescent wings flap at 3,000 times a second, allowing it to hover motionless over these colourful orchids, were to take out a swatter and squash it.

It was the early films that were most fascinating. The first-ever wildlife footage, of ducks on St Kildas. Cherry Keaton, a chap in spite of his name, who was the first filmmaker to realise that viewers were almost as interested in him as in the animals. Sir Peter Scott, who didn't. His main contribution to many films was to say, 'Yerrrs,' thoughtfully. But he had some luck. No sooner had he arrived in Komodo than he saw a dragon. Others were less fortunate. One of the clichés of the genre is: 'The crew had supplies for just six weeks, and in that time they had caught a single glimpse of a Pettifer's Acned Baboon through the trees. Then, on the very last day, a miracle ... '

We got slight hints of cheating: some animals who refused to show off to the camera were simply captured and filmed in a studio. And a chap from BBC Bristol once told me it was often a good idea to catch insects and pop them in the fridge for a while; it made them more co-operative.

I would like to have heard a little more about that kind of thing. And all those baby antelopes being eaten by lions, the frolicking polar bears, the leaping whales — they are wonderful, but very familiar now. How strict are the ethics? If a cute baby impala is being hunted by a lion, do the makers let it happen and film the kill in glorious colour? Do they ever manipulate the ending the audience wants? This was a fine celebration, but it had little time for examination or retrospection.

In Outnumbered, another sitcom about family life (BBC1, Tuesday, Wednesday and Thursday), Hugh Dennis is bonding with his older son by watching TV. David Attenborough is on. 'Come on, we've got 47 channels, there must be something half-decent,' he says, and they flip through a range of horrors: Day 47 in the Big Brother house ... now, more celebrity gossip ... ' before going back to Attenborough.

As you would expect from Andy Hamilton and Guy Jenkin, who gave us Drop the Dead Donkey, this is a plateau above most family sitcoms. The children, for example, are not lovable moptops but rather unpleasant. Especially the younger son, Ben, an evil little sod who could become one of the great comic monsters of television. It's full of zingers.

Dad: You're going to love your new school. Only one child in seven gets in.

Mum: And if anyone asks where you live, give them Grandma's address.

At times the dialogue has the surreal quality only children can provide. Harassed Mum is combing daughter's head for nits. Little girl says dreamily, 'I want to keep one in my hair, because it will have babies, and then I'll have a little town in my hair.' So much smarter than 'you did what to the car?'.

The Man who Lost his Head (ITV, Sunday) ticked off just about every cliché. Buttonedup British curator (Martin Clunes) goes to New Zealand to explain why a Maori village can't have back the head of its ancestral chief. The fact that his fiancée was an analobsessive about her wedding plans told us, from the first few frames, that he was going to fall for the wild untrammelled freedom of Maori life and the local beauty with her wild untrammelled hair. I think there is a computer program somewhere. You key in the variables, New Zealand or the Scottish Highlands (Local Hero), the characters' names, and seconds later out comes the entire script, right down to the anguished 'I've changed my mind' at the altar.